It's dog-head man's world and we're just living in it. 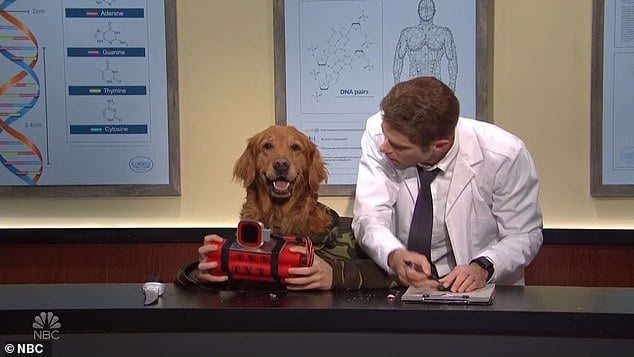 Late last night a new global superpower emerged. Created in a top-secret military lab in the bowels of New York City, this supreme being quickly outstripped its masters in terms of intelligence, talent, and beauty.

I am of course talking about Dog-Head Man. (Praise him!) The goodest boy to ever grace an SNL stage.

We met him briefly three years ago in a similar lab sketch helmed by guest host Sam Rockwell. But then he was merely  a “dog-head guy” for he had not achieved his final form. Only now, with military intervention and Simu Liu’s impeccable southern accent, has Dog-Head Man finally emerged as the pure and perfect being he was always meant to be.

Is he technically a horrific man-made abomination, proof of human kind’s hubris, arrogance, and eagerness to play god? Have we finally gone too far? The answer to all of those questions is undoubtedly yes, and yet I don’t care because I am too busy worshipping at the fluffy paws and snoot of our new god – Dog-Head Man. He cute, he defuse bomb, he eat sandwich. He rules my heart. Not even Cecily Strong and Mikey Day can withstand his adorable power. We all must break in the face of his sweet floof. Also, he has a knife.

When W.C. Fields gave the sage advice to never work with animals or children, he was speaking on their unpredictability and how easily they can upstage the actors, but perhaps he also saw a future where we were ruled by a creature that had the head of dog on man’s body. Well, its too late now Fields! Dog-Head Man is now our god. And we praise him! For he is good! He is a good good boy. He is so good.