Q&A With Hope Larson Author of All Summer Long, a Graphic Novel That Explores Male/Female Friendships & Girls Learning to Rock Out 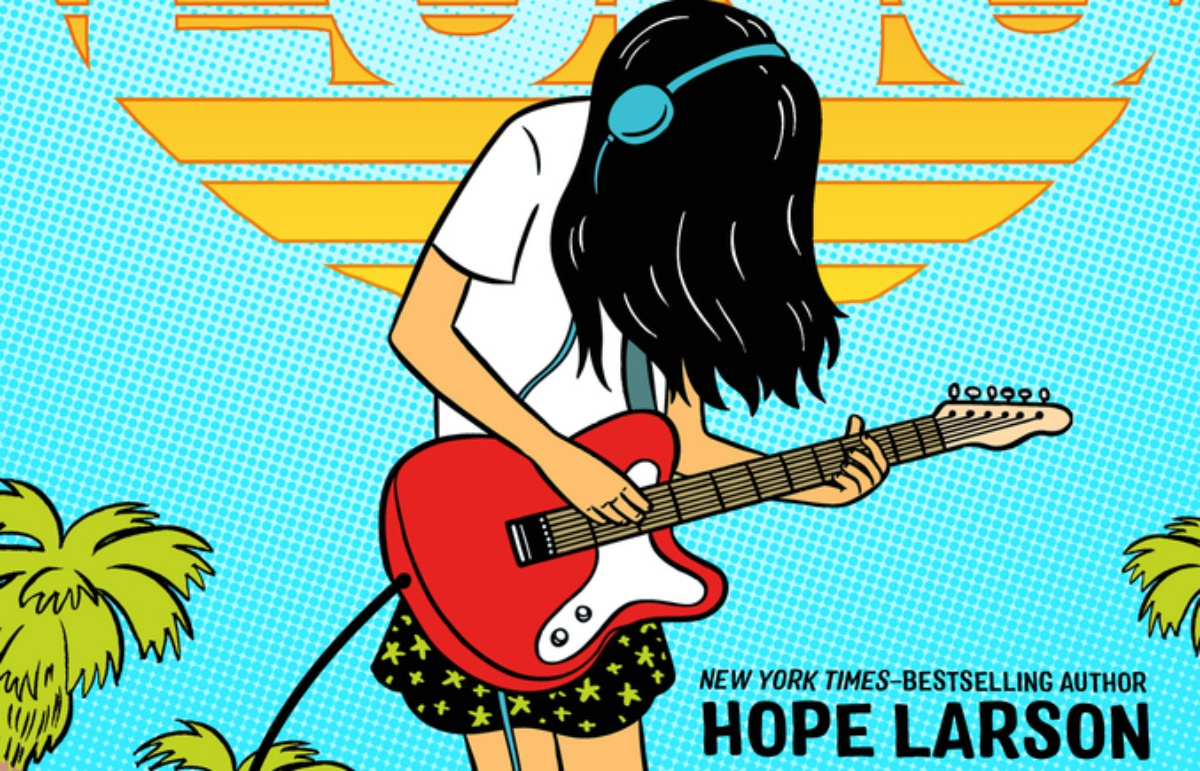 One of our picks for The Mary Sue book club was Hope Larson’s All Summer Long, a graphic novel from First Second books about a young girl named Bina who begins coming into her own identity when her best friend, Austin, goes away for the summer. Unmoored from her usual summer playmate, Bina begins bonding with Austin’s older sister Charlie. Through this new friendship, Bina starts to come into her own as a musician and realizes that not all change is bad.

We picked this book because not only was it an awesome coming of age story, but it also features a fantastically diverse cast of characters. We were able to speak with Hope Larson, Eisner winner, and the New York Times best-selling author and artist behind All Summer Long. 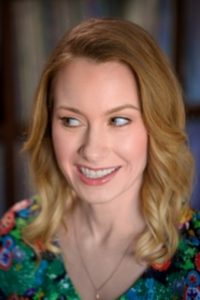 TMS: So often when we see coming of age stories centered around rock music, those are stories about men, which is what makes Bina’s musical journey so much fun to read as a brown girl who grew up loving metal. Why did you choose rock music as a genre for Bina to explore herself?

Larson: I chose music partly because so much of music, especially the live music scene, is male-dominated. I’ve always liked music, as a fan, but I never felt like I could understand it well enough to be a real fan, much less a musician, in the way that most of my male partners have been. I never felt like I had the raw material necessary to play an instrument. I felt similarly uncomfortable about making and reading comics, even for years after I’d been doing it professionally—I’ve read comics since I was a kid, but not always the “right” comics; I’ve been writing and drawing comics for almost 15 years, but not always “serious” comics—so I wanted to create a character who isn’t afraid to move through a primarily male artistic space, and I populated her world with adults, especially adult women, who can support her dreams and help her along.

Also, I don’t think Bina’s into metal, but I don’t really know. I can definitely see how that Steep Streets album cover, for the fake band she’s obsessed with, reads as metal, and that’s a fun interpretation!

TMS: I saw on your Twitter that you talk about how your writing process comes from a mechanical need for plot and characters, which honestly was quite refreshing to hear. For you, being both a writer and illustrator, which part of the process tends to need the most fleshing out—the writing or the art? Which do you find yourself tweaking more?

Larson: I do most of the heavy lifting in the writing stage, at least in terms of plot and character. Drawing can feel myopic, so I want to make sure in advance the whole thing will make sense when I get to the end.

When I say mechanical, I mean that there are narrative beats I set out to hit, and storytelling rules that I (mostly) try to follow. There’s a structure in place before I sit down and dig into the nitty-gritty of everyone’s inner life, and flesh the characters out with little details that make them feel personal and real. They’re the icing, and they need to be sitting on a cake that can support their weight. 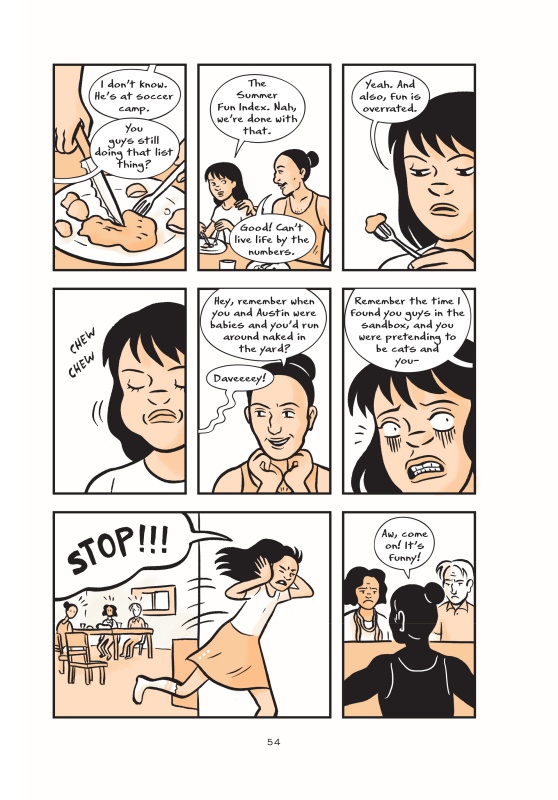 TMS: It feels so rare to have a boy and a girl be best friends and not have romantic conflict come into play between them. Instead, the conflict comes from them getting older and in a sense having gender norms being placed on them and their friendship. How did you construct their bond and then decide to have it expand to Bina and Austin’s sister, Charlie? Why do you think it is so difficult for people to accept platonic friendship between men and women?

Larson: This is a great question, and since I’m writing two sequels to All Summer Long, it’s a question I’ll be revisiting. Platonic friendship between men and women (and I’m talking about cis-het-ish men and women) is hard to accept because it’s often conditional. I have a number of platonic male friends, but you never really know how relationships and people will change and reconfigure over time, and what sort of loops everyone will get thrown for.

As for the Bina/Charlie/Austin triangle, Bina’s older brothers live far away, and she misses having a sibling around. But, of course, Austin and Charlie don’t get along too well, so Bina feels like a bit of a traitor for hanging out with Charlie.

TMS: This graphic novel is so beautifully diverse, from Bina’s family to the supporting characters, both in terms of race, but also sexuality. Since writing is more of that mechanical process for you, is it more thought-out when a character is supposed to be LGBTQ or non-white, or is that a more organic process?

Larson: Thank you. I’m just doing my best to capture something approaching the diversity I saw in Los Angeles and among my friends every day. As for Bina and her family, many of my friends have mixed-race kids. There was a time when I was in a relationship with a person of color, and it was a distant possibility we might have kids, and maybe we would have had a kid who looked like her. All of those factors contribute to the people we see in this book. This is definitely not an area I would categorize as mechanical. 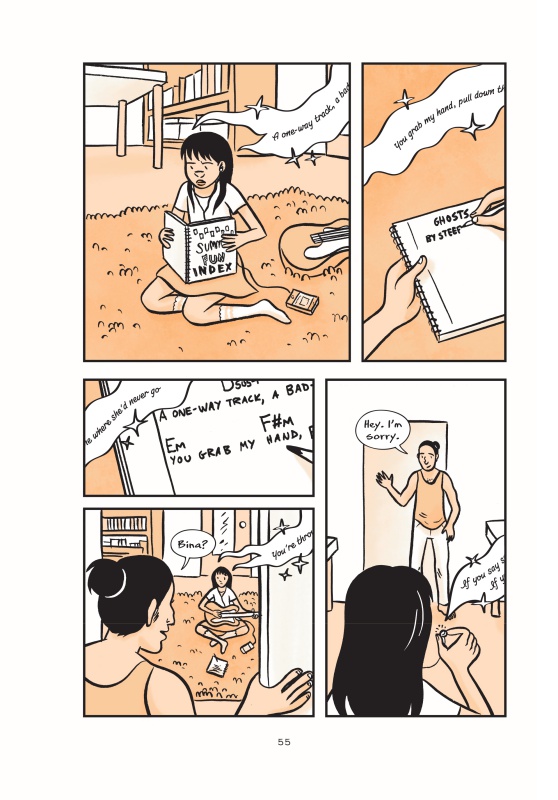 TMS: Following up on that, was Bina always intended to be a mixed race girl?

Larson: Yes, she was. I always saw her that way. I don’t know if she’s queer or not, though, because I don’t think she knows that yet. I didn’t know what the hell was going on when I was in my teens.

I was just talking with some friends about how it’s not really possible to write about adolescent girls without things being sexually ambiguous, because even when you’re straight, those relationships can feel as intense as love, and because it’s culturally acceptable for girls to touch each other. Maybe Bina dates guys in high school and then goes to college and realizes, “OMG, I’m gay!” Could totally happen. A book is a snapshot of one moment in time, not a character’s whole life, and people are always changing or figuring themselves out.

TMS: You are an Eisner award winner, a New York Times Bestselling author, and All Summer Long is a great testament to your abilities as a comic book writer. What is next for you? What are some stories that you are looking forward to telling?

Larson: I’m currently working on the first of two follow-ups to All Summer Long, and the brilliant Rebecca Mock is drawing our next book together. That book doesn’t have a solid title yet, but it’s historical fantasy set just after the end of WWI. It’s about witches, but it’s nothing like the other witch books out there. It’s hard for me to see beyond those 3 books yet, but I’m sure I’ll come up with something soon, because ideas tend to pop up when I’m not expecting them, and don’t have time for them. But they won’t be denied! 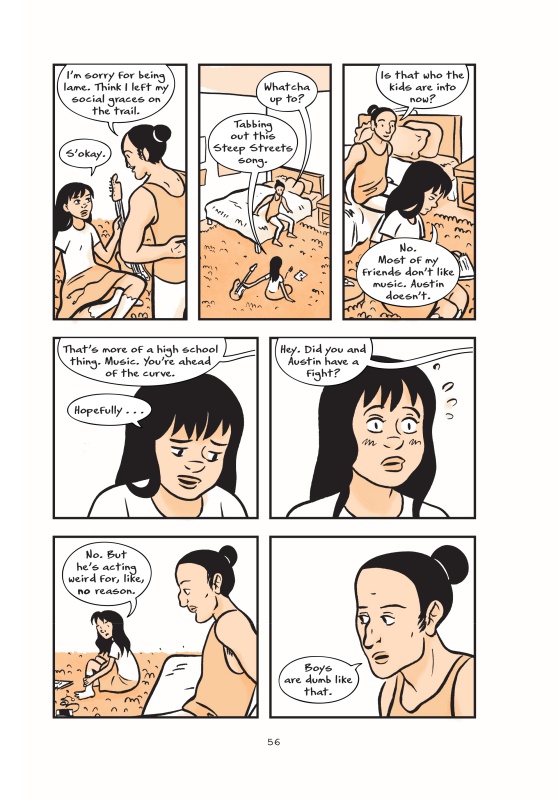