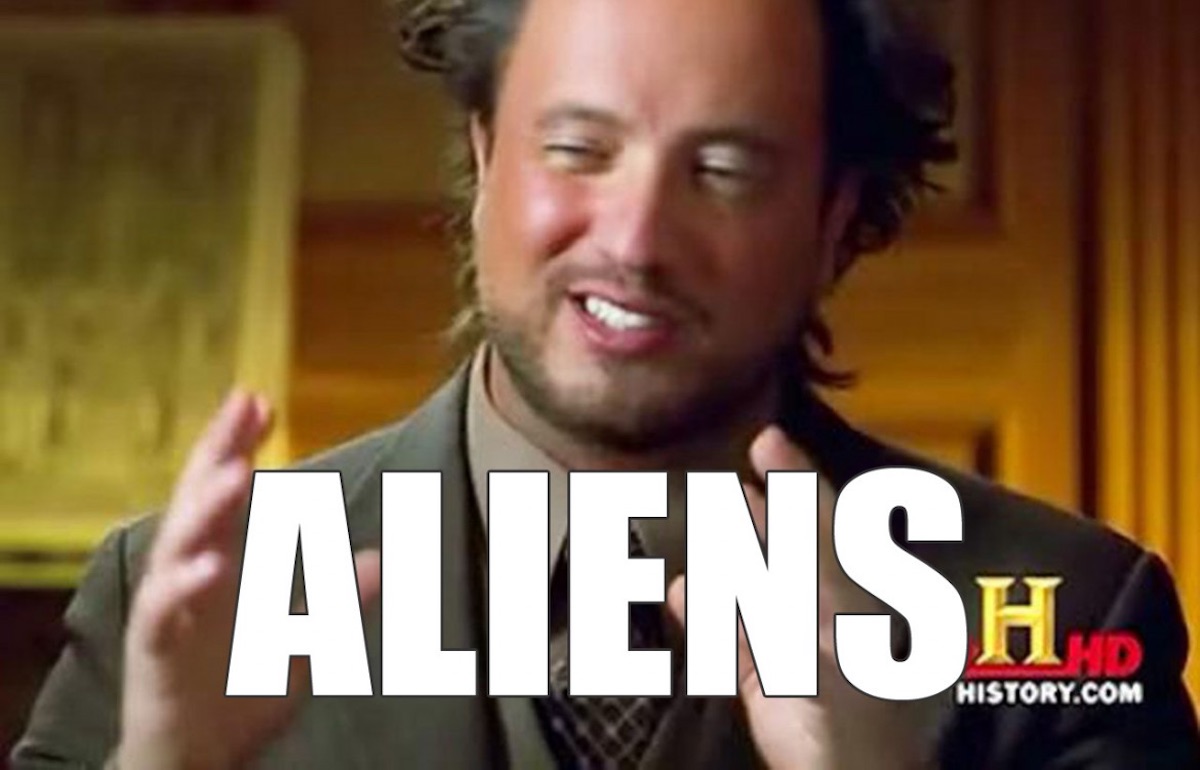 Oh, the aliens are back? Cool cool. Join the line behind the murder hornets and Loch Ness Monster. Because in 2020, we barely have time for the news that the Pentagon’s previously very secret UFO unit will be making some of their investigations public—including the fact that they maybe, ya know, found an alien spacecraft that one time.

For a while now we’ve known that the Pentagon actively investigated and reported on encounters by pilots with Unidentified Flying Objects. It was called the Advanced Aerospace Threat Identification Program, it was supposedly disbanded in 2012, and yet it kept going. Also, in recent months, the Pentagon even confirmed the authenticity of some UFO siting documents that emerged in 2017/18.

Now the Pentagon also says that the program to track UFOs has a different name, and while it’s not a covert unit, it does deal with confidential materials. The Unidentified Aerial Phenomenon Task Force is mainly, and understandably, concerned with airborne vehicles that might pose a military threat to the United States. But that doesn’t mean they don’t also look for the aliens.

This office is overseen by the Senate Select Committee on Intelligence (overseen by Marco Rubio of all people), and the big thing here is now that the unit has been reorganized and unclassified, some of its work and formerly classified materials and discoveries are coming to light. That’s where we get … to the aliens.

Both the previous and current versions of the Pentagon UFO unit have studied actual crash artifacts from unidentified aerial vehicles that crashed somewhere. That alone is amazing! And the people that studied them and worked on this program are coming forward (without physical proof, mind you), to state that they believe some of those materials were not of this world.

According to The New York Times, who spoke with the previous director of the Pentagon UFO program Luis Elizondo, Elizondo and other experts are “convinced that objects of undetermined origin have crashed on earth with materials retrieved for study.” Those experts include Eric Davis, an Astrophysicist who subcontracted with the Pentagon. Davis said that the materials that made these vehicles are not of this world, or at least not of human construction. “We couldn’t make it ourselves,” Davis told The Times.

There still isn’t a lot anyone can talk about, even with former majority leader and Senator for Roswell (and the rest of Nevada) Harry Reid saying more information should be made public about what this unit has discovered. Davis, without saying too much, explained to The Times that he gave a classified briefing as recently as March about “off-world vehicles not made on this earth.”

No one can actually say anything about Roswell specifically, but even Donald Trump Jr. has implied he knows things about Roswell, which is … sort of terrifying. Really, we’re stuck amid a global pandemic and reckoning with systemic racism and the people that know about aliens are the bad President’s bad children? At least that ups the odds they’ll slip up and confirm more.

The big takeaway here is that the Pentagon is finally admitting that they’ve been studying UFOs for a long time. They have some of them even? People have physically examined and touched these artifacts, or claim to have, and say they are not of this world. Which leaves us with only two important questions: where is this alien planet and how long before we can leave this one and go there?

Because honestly, the fact that in 2020 the news that aliens are probably real hasn’t made much of a splash just proves that we need to be beamed up from this ridiculous planet as soon as possible.