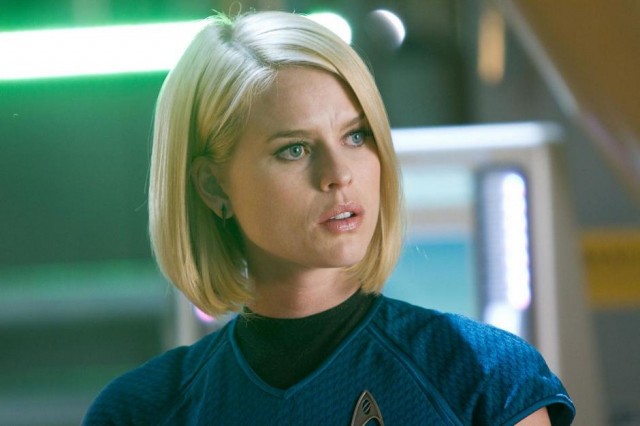 With too many things and on too many issues, celebrity voices ring the loudest. It’s our collective fault. We read the magazines, we watch the shows – we all take turns placing celebrities on pedestals, making them spokespeople, and using their opinions to help form our own. None of us are immune, and it isn’t all bad. Everyone needs role models, and not everyone is lucky enough to be able to find them in their own lives. In that case, celebrity spokespeople and role models can be a gift.

Last week, Olympian and reality star, Bruce Jenner’s coming out as a trans woman was the talk of media, and it’s because Jenner is a celebrity that certain conversations are even happening in the mainstream. While there’s a huge case to be made for Jenner’s story taking away from the voices of less-privileged trans women, there’s also a case to be made that Jenner is helping an important conversation be had on the national stage – one that will ideally benefit those less-privileged trans people. Not without a lot of bullshit, I’m sure, but still.

However, the danger with celebrity platforms is that when celebrity voices speak from a place of ignorance or bigotry, these ideas are also amplified as people use them to define their views.

Two days ago, Star Trek Into Darkness‘ Alice Eve posted this great photo of body confidence activist, Harnaam Kaur, on her Instagram with the hashtags #equalpay and #equalrights. Seems like it’d be a feminist post, right? Well, yes and no. While Eve did post the image of Kaur in solidarity with a fellow woman, Eve then felt the need to talk about Bruce Jenner’s announcement in the comments for some reason. They have since been deleted (but not before the Internet took notice).

The Hollywood Reporter is one of many publications that reported on her comments:

The comment that is now absent from Eve’s Instagram reportedly read: “Nope. If you were a woman no one would have heard of you because women can’t compete in the decathlon. You wouldn’t be a hero. You would be a frustrated young athlete who wasn’t given a chance. Until women are paid the same as men, then playing at being a ‘woman’ while retaining the benefits of being a man is unfair. Do you have a vagina? Are you paid less than men? Then, my friend, you are a woman.”

This comment understandably got her a lot of flack, as it is hugely transphobic. After the ensuing flack:

Eve posted a photo of David Bowie, writing, “I am a supporter of anyone who wishes to explore their gender identity. Sometimes language doesn’t express the idea of identity sufficiently, as in this case. I am also a believer in equal rights for all … Whatever your race, colour or creed.”

Eve also thanked her followers “for engaging with me on this subject, because I felt confused and now I feel enlightened and like I know what education I need to move forward. I appreciate the time and thought.”

[UPDATE 6:28PM: After reaching out to Alice Eve for a statement, she got back to TMS with the following:

I deeply apologize for offending anyone. I support equal rights and equal dignity for all. I have deep compassion and support for Bruce Jenner.

My intention was not to offend. My intention was simply to express that, with the overdue and welcome acceptance of us all living on a gender spectrum, we must encourage equality for all.

I really hope so, and I hope that she doesn’t think she’s learned all she needs to learn from one instance of correction from Instagram followers. I hope that she’ll keep doing her research on what it means to be transgender as she continues to form her feminist views.  Because a feminism that doesn’t elevate all women is pointless. 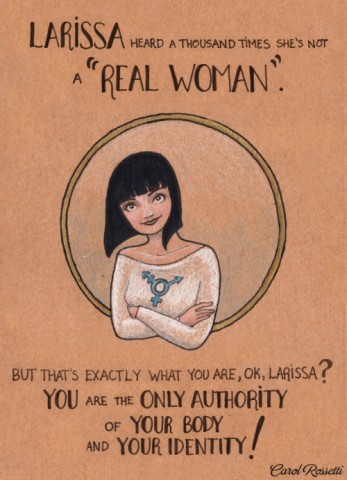 Eve’s ignorant comment points to a general ignorance about what being transgender even means. Other writers have written about it a lot more knowledgeably than I ever could (a great place to start is the work of TMS’ own Marcy Cook!), and I encourage you all to seek out trans writers when doing your homework. After all, no one knows what it means to be trans better than trans people. However, I’d love to point out some very basic points, in brief, that you may want to keep in mind if your hope is to be a more informed feminist and ally.

1) Trans women are women and trans girls are girls.

What’s more, they always have been. Period. They didn’t “become” women any more than a gay person “becomes” gay. They may have realized their trans status later on in their lives, but that doesn’t mean they’re becoming something new. It means that they’re shedding the lie of the identity they were forced to present before.

Which means that, in the case of someone like Jenner, they had privilege they didn’t necessarily want (much like Eve has the privilege of being white, and financially comfortable, and benefits from that in many ways that would probably mortify her to admit). Trans people’s histories should not be held against them. In a transphobic world, they had very little control over how they were received and perceived. When they come out as trans, they are finally taking control, and it’s a brave thing. Eve should not be calling Jenner’s past or motives into question.

2) Sex and gender identity are about more than just body parts. And both of those things are different than gender expression.

Genitals aren’t the only decision-makers when it comes to sex and gender identity. That’s not just me talking out of my ass or being “politically correct” – that’s science. Otherwise, cis women born without vaginas would be considered men – but they’re not. Cis women born with two Y chromosomes would be considered men – but they’re not. Gender identity and expression has to do with a combination of genetics, social construction, and personal identity that is individual to each person.

Meanwhile, gender expression is something else entirely. For example, I’m a cis, straight woman. But if I decided to wake up tomorrow and wear men’s clothing and behave in a more “masculine” way, I’d be expressing masculinity. I’d still consider myself a woman (how I identify) even while performing masculinity for the world. Identity is who you are. Expression is what you show people. And those don’t always have to line up, which leads me to…

3) If gender isn’t something that can be completely dictated by science or society, and depends so heavily on individual experience of the world, and if it’s possible to identify as one gender while presenting something else, why is it so important for us to categorize people into two neat little groups?

Um… here, I’m at a loss. The best answer I can come up with is… because it’s easier? And that just seems weak.

4) Feminism is about equality between the masculine and the feminine, not just between men and women.

Feminism is about women being able to freely design their own lives the way that men get to. However, it’s also about allowing people to express femininity or masculinity freely and without consequence. If a cis, straight male decides to wear a dress, it shouldn’t be any more remarkable than a cis, straight woman wearing pants. Because masculinity wouldn’t be valued more than femininity. War movies wouldn’t be considered more “important” than romantic comedies, because traditionally “masculine” pursuits and interests would not be more highly valued than traditionally “feminine” pursuits and interests. Hell, things like interests and pursuits wouldn’t be gendered at all! Because women go to war, men fall in love, and people of all genders are more complex and nuanced than we seem to want to give them credit for!

Now, please feel free to tell me where I’ve gotten it right, or wrong, in the comments below. Conversation and communication is key, y’all. Just be respectful, k?

(via The Daily News; Image via Carol Rossetti)