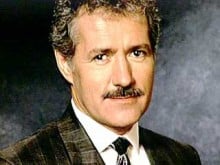 Outside of very specific cases, auto-tune and old TV personalities or public figures don’t really mix. Last night’s episode of Jeopardy was not one of those cases.

Last night in the Double Jeopardy round, one category was “Alex Meets Auto-Tune,” wherein Alex Trebek would sing the lyrics to songs in Auto-Tune with some fresh beats pumping in the background, and contestants had to identify the song. I don’t want to spoil any of the fun by telling you the specific ridiculous bits before you watch, so let’s get straight to the video:

Now, if you’re like me, you thought that these were going to be more like pop songs. No THE FREAKING BATTLE HYMN OF THE REPUBLIC or GO DOWN, FREAKING MOSES! That was some of the most ridiculous musical styling I’ve ever heard, in my life! Also, that beat on Danny Boy was surprisingly energetic for that song. I kind of liked that one.

We have all learned a valuable lesson today. If you want to make your show relevant to a younger, hipper audience, don’t let Farmer in the Dell have anything to do with it.

(Via Buzzfeed, title image via RedRiverAutographs)