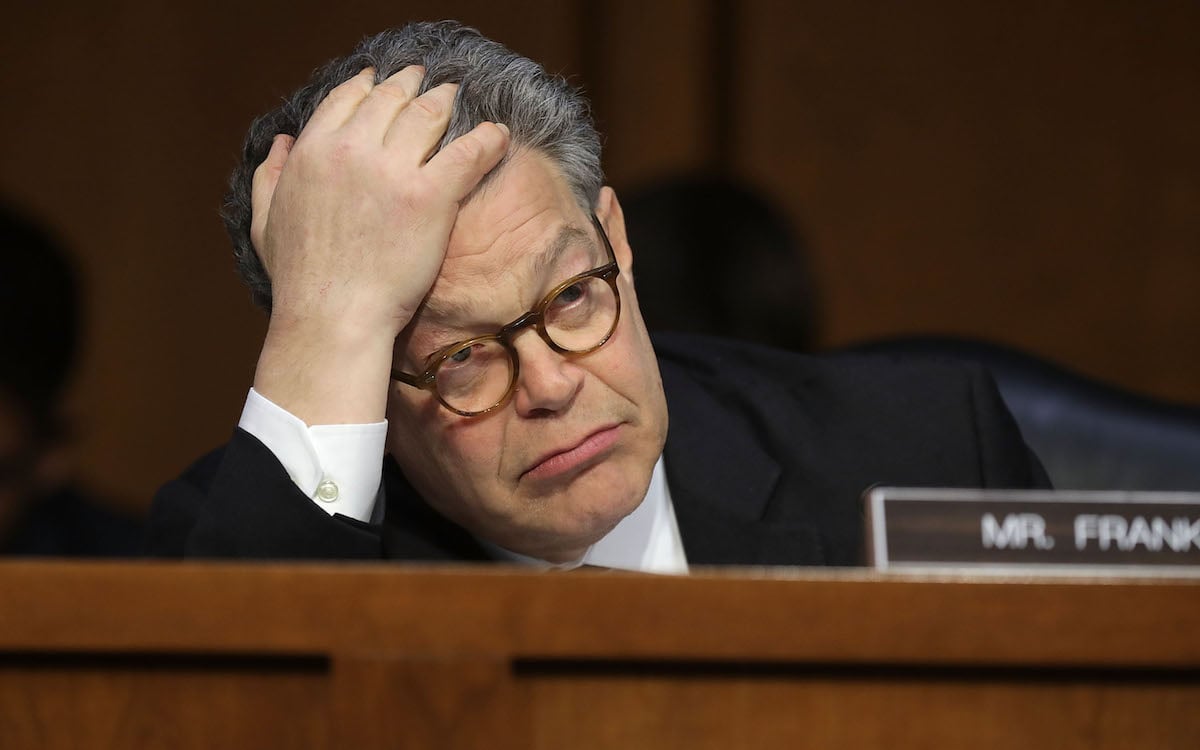 An article of 12,000+ words published in The New Yorker today offers some deep lamentations, a bunch of excuses, and absolutely no new information regarding Al Franken’s departure from the Senate.

The profile was written by Jane Mayer, who made no attempt to hide its sole purpose: to make us feel as sorry as possible for Franken. She writes that he regrets resigning from the Senate and that a number of his former colleagues also regret calling for that resignation. She interviewed some of his former SNL colleagues, who also offered their support of Franken, just as they did a year and a half ago. Mayer talked with a lot of people who think Franken was treated unjustly–and that’s about it. “America had ghosted him,” Mayer writes, but she gives little space to the actions that caused that breakup.

As a refresher, back in November of 2017, a radio news anchor named Leeann Tweeden accused Al Franken of inappropriate sexual conduct during a 2006 USO tour they did together. The two performed together in a sketch Franken wrote, which included a kiss between their characters. Tweeden says that during rehearsal for the skit, Franken went too far.

“We did the line leading up to the kiss and then he came at me, put his hand on the back of my head, mashed his lips against mine and aggressively stuck his tongue in my mouth,” she wrote in the story she published online, detailing her account.

But even more damning was a photo Tweeden has. She says it was taken on their flight home, and it shows Tweeden sleeping while Franken gropes (or mimes groping) her breasts, smiling at the camera.

Mayer interviewed a number of Franken’s former comedy colleagues who attempted to explain the joke. He’s not a bad guy, they say. One called it “a mockery of someone acting in bad taste,” and another longtime SNL writer, James Downey, said that it’s in line with a running bit he does, which “involves adopting the persona of a douchebag.”

“The joke was about him. He was doing ‘an asshole,'” said Downey.

Except none of that makes the joke any better. None of those excuses justifies using an unconscious woman as a prop in his crude sexual satire. It’s still totally demeaning to her.

Mayer also challenges Tweeden’s claim that Franken wrote the USO sketch for her specifically. She interviewed two actresses who had done the same sketch with Franken on previous USO tours and didn’t have a problem with him or the scene. This inaccuracy seems to be very important to Mayer, despite the fact that what Tweeden actually said was that Franken had told her he wrote the sketch for her. Maybe that, too, is inaccurate, but Mayer doesn’t address it.

What she does address, and at length, is Tweeden’s status as a Republican. Mayer never comes right out and says that Tweeden’s allegations were politically motivated, but that seems to be the implication. This, of course, is the same thing that is said about women like Christine Blasey Ford and the women who accused Roy Moore of misconduct, and it’s just as disgusting to see it aimed the other way. Sure, Sean Hannity and Breitbart commenters were “gleeful” over the Franken accusations. That’s not surprising. It also doesn’t mean Tweeden is lying.

Every defense of Franken comes down to “Republicans don’t have standards so Democrats shouldn’t either”. Hard pass on that.

Change a few words and it works for other things like racism.

If you don’t hold your own side to a standard then you don’t have any principles.

Mayer centers the article around Tweeden’s accusations, largely ignoring the other seven women who spoke out against Franken in the weeks between that original article and his resignation. (“Only two incidents were alleged to have happened after Franken was elected to the Senate,” as if that’s not two too many.) She also does mention that “By the end of the day [he resigned], thirty-six Democratic senators had publicly demanded Franken’s resignation,” but she focuses almost entirely on Kirsten Gillibrand, as have most people still angry over his departure.

Again, this article is about 12,000 words long, and it offers no new insight into an event that happened about 19 months ago, so if you’re wondering if you need to sacrifice a substantial portion of your day to read it, I’m going to say no, you absolutely don’t. That much is made clear from the opening paragraph, where Mayer describes Franken as living in a “man cave” of shame—weirdly illustrated by the fact that, when Mayer visited his home, his wife was sick, so Franken could only put out “takeout containers of hummus and carrot sticks.”

I can be senator but I can’t put hummus in a gosh darn bowl!!!

Mayer works very hard in her article to make us weep for Al Franken, the man ghosted by America for apparently no reason at all. No one, it seems, has had it harder in the last year than Al Franken, who was all but assassinated by our callousness.

resigning your senate seat and retiring to private life as a wealthy, still-beloved man is apparently the political equivalent of being executed by the state. great take angus king. https://t.co/SQQlr6asZp

In this novel of a fawning profile, Mayer apparently didn’t have room to make it clear that no one fired Franken or forced him out. He resigned. He might regret that now, but it was his decision.

I don’t know who needs to hear this, but as a grown man Al Franken made his own call about whether or when to resign — and it’s the height of fancifulness to blame his departure from the Senate not on his choices, but on those of a woman.

Al Franken could have had his Senate Ethics Committee hearing, had he wanted to, but I think today’s New Yorker piece shows that even now he doesn’t really know what his defense would have been.

You are not entitled to due process to resign from a job. Your coworkers urging you to resign is not denying you due process.

He resigned before the ethics committee completed its investigation. He could have stuck around. That’s on him. Not Gillibrand or any other democrat. https://t.co/0pxXUcUp8X

If Franken wants to run again, no one is stopping him.

Everything else is just pointless noise.

What makes all of this really infuriating is that Mayer doesn’t seem to just have an issue with what happened to Franken (or rather what he chose to do), but that she views it as evidence that the #MeToo movement has gone too far. “This isn’t Kavanaugh … It isn’t Roy Moore,” she quotes Sarah Silverman as saying, as if we don’t all know that already.

Here’s the last paragraph of the article, making it the message she chooses to end on:

The lawyer Debra Katz, who has represented Christine Blasey Ford and other sexual-harassment victims, remains troubled by Franken’s case. She contends, “The allegations levelled against Senator Franken did not warrant his forced expulsion from the Senate, particularly given the context in which most of the behavior occurred, which was in his capacity as a comedian.” She adds, “All offensive behavior should be addressed, but not all offensive behavior warrants the most severe sanction.” Katz sees Franken as a cautionary tale for the #MeToo movement. “To treat all allegations the same is not only inappropriate,” she warns. “It feeds into a backlash narrative that men are vulnerable to even frivolous allegations by women.”

Tweeden’s accusations aren’t “frivolous.” Neither are those from the other seven women, but they also weren’t presented as being equivalent to rape. None of the women who spoke out against Franken wanted to see him punished in some horrific way. Tweeden read her apology from Franken aloud on The View and said she accepted it and that she wasn’t asking him to resign or be fired. One of the women said she even continued to vote for him after he allegedly groped her during a photo op. It seems like the overreactions aren’t coming from those doing the speaking, but from those refusing to listen.

Women and other victims of sexual abuses of all degrees need to feel safe in speaking out about the things that have happened to them without being told their stories aren’t bad enough to make them worth listening to.

Whatever sympathy you feel for Franken, please spare a thought today for the all the women who see Mayer’s piece and decide again that the story of the powerful man who made them feel cheap and small isn’t worth telling; he is more important than she is.