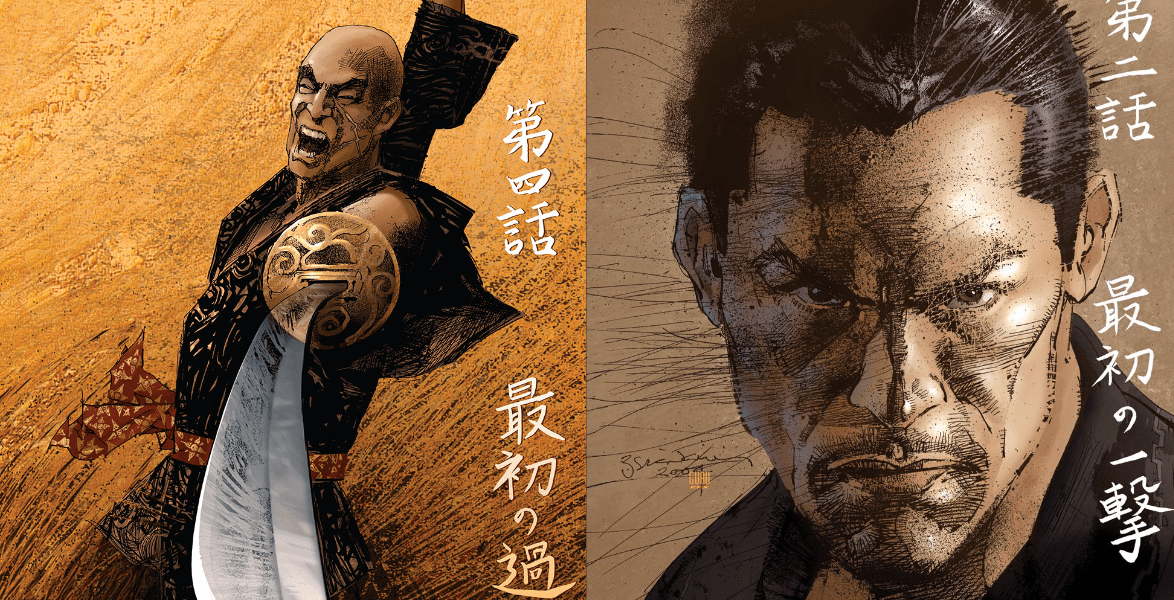 Yesterday, Bleeding Cool confirmed that Marvel’s new editor-in-chief and longtime talent scout, C.B. Cebulski, had written for the company for about a year in the early 2000s under the pseudonym “Akira Yoshida.” Cebulski, who is a white American, even went so far as to give comics press interviews pretending to be Yoshida, inventing an entire backstory in which he supposedly learned English in his native Japan by “reading superhero comics and watching TV and movies.” (Instead of, you know, in school in one of the most highly educated countries in the world.)

It’s unclear when Marvel discovered the real identity of Yoshida (who were they making these freelance checks to?), and who specifically was involved in covering it up for so long, but Cebulski has since owned up to the pseudonym, chalking it up to being ” “young and naïve” but not reckoning with the harm this behavior does to marginalized creators.

And perhaps most damningly for Marvel, Cebulski was not only hired under a Japanese fake identity: he was also hired to write a bunch of comics set in Japan under that name. And those comics sure feature a whole lot of honor killings, ninjas, and white people being very special.

It is not a good look.

I’ll note upfront that these comics are not the worst of the worst. As a comics villain, The Hand has seen some appallingly racist, exoticizing storylines over the years, and these “Yoshida” storylines are by no means ’70s-level offensive. I also understand that Cebulski has done a lot of work getting Marvel to hire Asian- and Asian-American artists, and that he’s also encouraged them to recruit from the vast pool of manga talent.

But ultimately, this isn’t just about him. It’s also about what kind of stories Marvel wants to hear from marginalized voices (even fake ones), and how the pressure to perform ethnicity in stereotypical ways and center whiteness comes through in these stories. If companies keep wanting stories like these, they’ll continue to create an environment where it’s easier for unscrupulous white writers to present palatable, comfortable, and stereotypical versions of the “other” than it is for marginalized people to tell their own damn stories.

In lieu of appropriating garbage, I’d encourage you to instead read and buy the work of the awesome creators under the #ActualAsianComicWriters tag. To help with that, TMS will have a post with some of our favorite works by Asian creators later today—just in time for holiday shopping!

Here, we take a look at some of “Yoshida’s” work.

In this limited series, Kitty Pryde and Lockheed travel to Japan after “dragon-stealing, picture-taking, letter-sending ninjas” from a rogue sect of The Hand, called The Path of Destiny, lure her there. The Path of Destiny are a cult devoted to the ninja demon Ogun, who once possessed Kitty, and they want her to lead them as they regain their status in the Japanese supernatural underworld by wielding an ancient, powerful sword. In order to ensure her cooperation, they hold Lockheed hostage.

Of course, she’s quickly accosted by “sleazebag” Japanese men in the first issue, because foreigners and white women, am I right, guys? 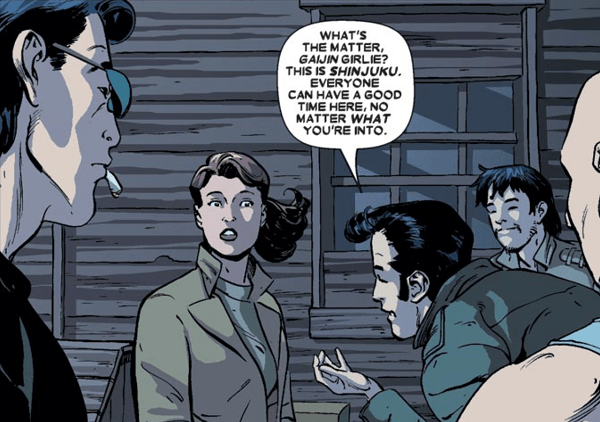 Obviously, there are ninjas.

And, of course, we are reminded again and again that she is the strongest and best of the ninjas, because white people are the best at martial arts that Asian peoples invented. 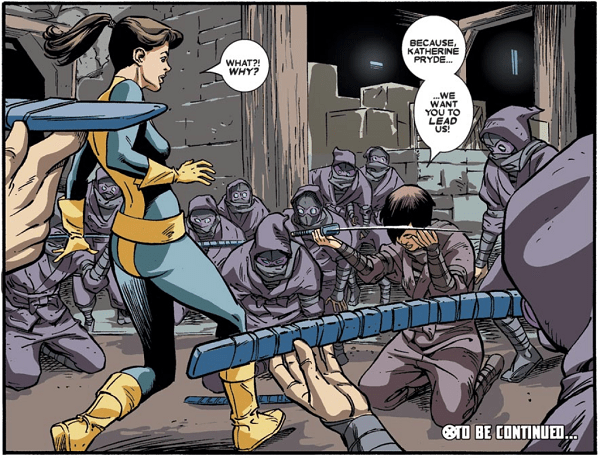 And everyone repeatedly calls her gaijin, just in case we forgot Kitty Pryde isn’t Japanese.

In this limited series, Wolverine returns to Japan to visit his foster daughter Amiko, when he finds himself caught up in an ancient battle between the Priestess Mana and her evil twin sister, Hana, who has joined forces with the Demon Lord Ryuki and hopes to open a doorway to the world. I did appreciate Mana’s centrality and agency in this story, but it’s still got a whole lot of the same. 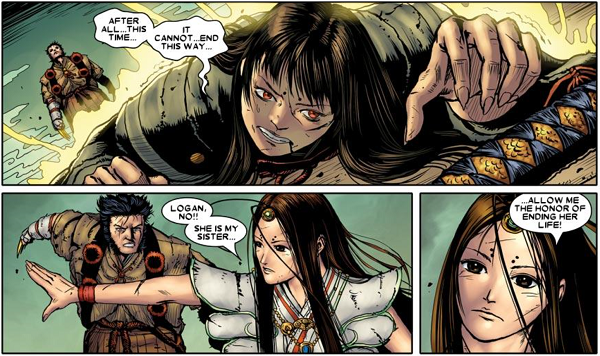 And this comic also feels weirdly obsessed with establishing Wolverine’s Japanese cred. Like, it really wants you to know that he knows about Japan, but in a performative way that reads as simply clunky without the backstory, but now feels very doth-protest-too-much. 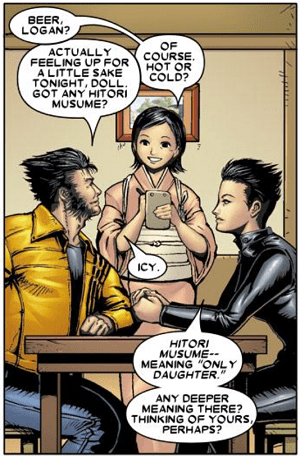 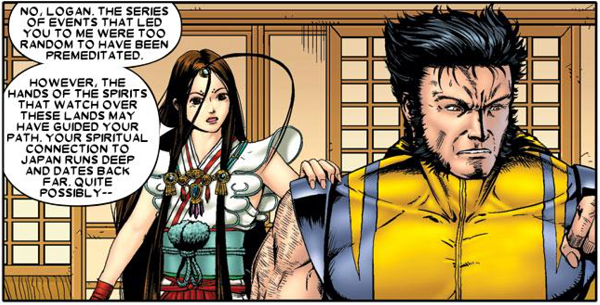 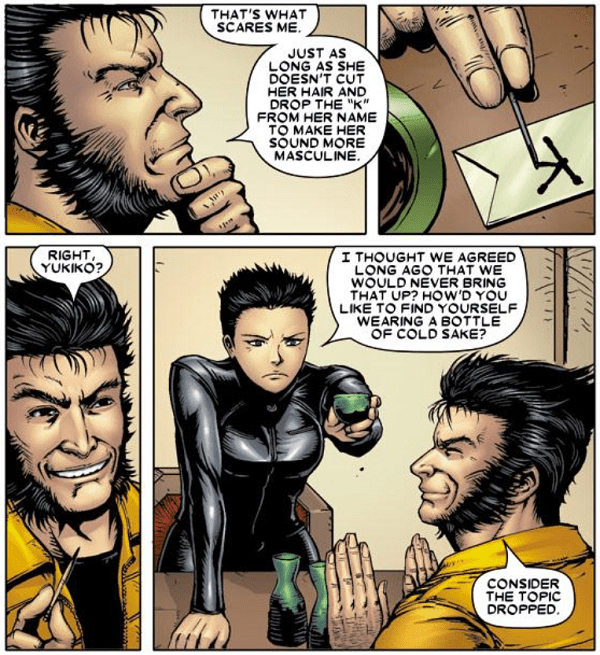 This limited series tells the history of The Hand’s founding in late 16th-century Japan. Kagenobu Yoshioka is raised by The Hand, which is dedicated to restoring the sovereignty of the Japanese people and fixated on racial purity. As the adult leader of The Hand’s sword school, Kagenobu allows Eliza Martinez, a half-European, half-Japanese woman, to join the Hand despite her heritage, and then he falls in love with her. The Hand then comes after them for their love, and they kill themselves rather than die in defeat. However, The Hand eventually revives Eliza as their “living weapon,” just as they do with Elektra in the present.

Of course, being about the hand, it’s more ninjas and samurais.

And more honor, this time via death by suicide.

This one also has the very weird “marginalized people are the real racists” tone going on. Now, it goes without saying that racism and fixations on “purity” are never okay, and the prejudice that hāfu and Hapa people have to deal with is unacceptable. But given who was writing this, the comic’s fixation on also condemning Japanese people who don’t want Europeans merchant-colonizing them is very weird. 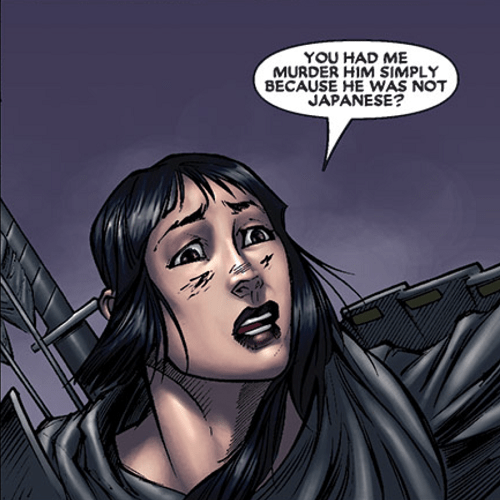 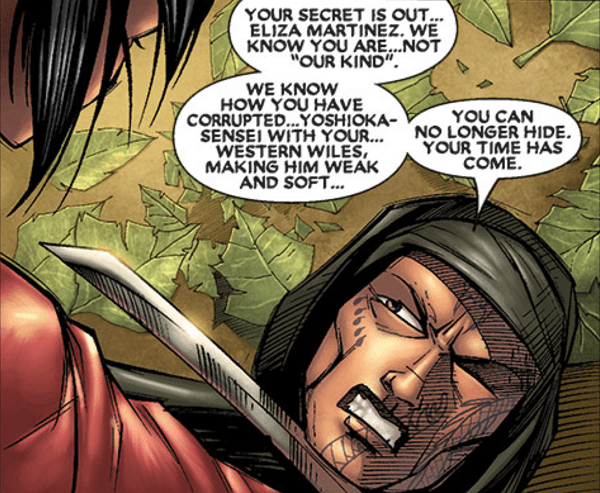 As I said above, these are hardly the worst of the worst, but for comics published in 2005, they’re certainly not great—and they reflect a lot of the problems we see in white storytelling that’s more concerned with mining other cultures than representing them.

As I mentioned above, I’d recommend you palette-cleanse from all the appropriation by buying and reading the work of any of the artists under #ActualAsianComicWriters. And we’ll have a list of our TMS faves up soon!