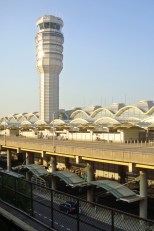 Last night, two planes landed safely at Ronald Reagan Washington National Airport (DCA) — an occurrence which happens over a million times in any given year. However, these two planes landed without the aid of the airport’s air-traffic controller, who was mysteriously absent for half any hour just after midnight. According to an aviation official quoted by the Associated Press, the controller had fallen asleep, and is currently being suspended from all operational duties while the incident is investigated.

The tower normally is staffed by one air-traffic controller from midnight to 6 a.m. The on-duty controller did not respond to pilot requests for landing assistance or to phone calls from controllers elsewhere in the region, who also used a “shout line,” which pipes into a loudspeaker in the tower, internal records show.

To pull off such a feat, the pilots of the 737 and the Airbus 320 gave each other frequent status updates and conferred with a nearby control tower that was not associated with landings. The real risk, it seems, was not from traffic above the airport but rather ground crews. At night, workers frequently cross the tarmac with equipment and sometimes even other jets in preparation for the next morning.

This is apparently not the first time the tower at DCA, which only has one controller working the graveyard shift, has gone dead. About a year ago, the lone controller was locked out when he forgot his keycard.

Thankfully no one was hurt in this startling incident, but authorities are working to prevent it from every happening again. Transportation Secretary Ray LaHood announced this morning that a second operator will be on duty for the DCA night shift effective immediately, and a nationwide probe into other airports has been proposed.

Though this incident is certainly unhappy news for any frequent traveler, like the famous Hudson river landing from a few years back it underlines the training and professionalism of the pilots in the cockpit of these massive vehicles. That said, I’m going to think twice before booking a redeye flight anytime soon.

(WaPo via Gizmodo, image via Wikipedia.)