AIM Redesign Gives the Service a Shot in the Arm, a Shot at Relevance 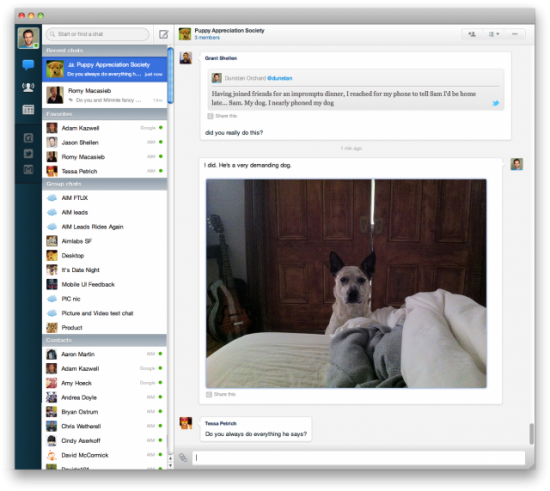 Back when I was a kid, AIM was the premier messaging service. Anyone who was anyone had at least 2 screen names, both involving horrible mispellings, puns, and arbitrary numbers. Back in the days when having someone’s screen name (legitimately from them, not just a mutual friend) was more important than having their number. Since then, the advent of social networking has severely changed the instant message landscape and the cyber landscape at large, leaving AIM more or less in the dust. But now, AIM is trying to rise back to relevance with a new redesign, and from what I can tell from its preview features, it looks like it might actually have a fighting chance.

Jason Shellen, of recently acquired Thing Labs, and his team are the ones largely responsible for the new design which has an increased emphasis on conversations and a decreased emphasis on “really annoying widgets and things that you never use and that clutter up the experience something fierce.” In fact, it might be a little more fun to cover the redesign by that defined classic AIM that is now gone.

It’s not all buddy list-centric any more. The new AIM likes to focus on conversations, and makes sure that they persist over a period of time. No more noticing that you’ve left a particular window open for weeks and realizing you have a huge backlog of text. That kind of persistence is automatic now. Also, there’s no need for custom group chat rooms either. You can simply invite a third person into a two-person chat if you want. Easy as that.

Say goodbye to direct connect. The new client supports inline pictures and videos, so you don’t have to directly connect and click through that scary message about making sure you trust your buddy. Also, peer-to-peer file sharing is gone. Now, if you want to send a file, it’ll be hosted on the AOL server for 72 hours or so.

You won’t need a third party service to run your AIM account and other things from the same interface anymore. Much like many of the popular third party messaging systems that sprung up around it, AIM has finally adopted multiple account support, meaning that you can use the new AIM client as a hub for your Google Talk and Facebook chat accounts as well. It’s worth mentioning that these conversations are synchronized too, making the transition between clients seamless, in theory, at least.

You won’t have to wait for your friends to get online anymore. Finally, AIM added the ability to send messages to offline friends and have them delivered upon login, yet another feature third-party services have been providing for a long time. On the downside, if you type “I love you” into the silence after someone signs off, they will actually get see it now.

On that same subject, AIM has taken another hint from Facebook and Twitter and will actually broadcast your “statuses” to “followers.” No longer will you have to wonder who’s looking at your status, or stalk that girl you kind of like, read the lyrics she put in her away message and think “Is that about me?!” Now, the updates come right to you automatically, so you don’t have to feel nearly as creepy about it! Of course, now you have to follow her, so you can’t stalk in secret. It’s a trade-off.

Lastly, the new AIM client has some direct social media support as well. Outside of Facebook Chat, which is just chat, users can get updates from Twitter and Instagram, but in an interesting way; users will only receive notifications of activity specific to them like @mentions or Instagram likes.

All in all, it looks like this new AIM redesign is bringing AIM into the modern day with intelligent functionality that fits into today’s social landscape. Its new interface is sleeker, and from what I can tell, it’s just more functional overall. It doesn’t seem to have that classic AIM fear of “the other” now that it’s accepting that users have other accounts and tries to accommodate them. I mean, there’s even an iPhone app. Bottom line, it looks like this might actually be a useful platform you might want to use even in the presence of other viable options. Or, in other words, It’s not the AIM you remember at all. I’m not sure I want a user-friendly AIM. I still fondly remember the quirks of the old-fashioned, barely functioning monster that defined my youth. The one I used because I had no choice. All that being said, I’ll still give this a try, but it doesn’t sound like there’ll be any nostalgia beyond getting to say “I’m on AIM.” But then again, maybe that’s enough.

You can check out the preview here.