How Ahsoka Tano Completed the Arc of Anakin Skywalker 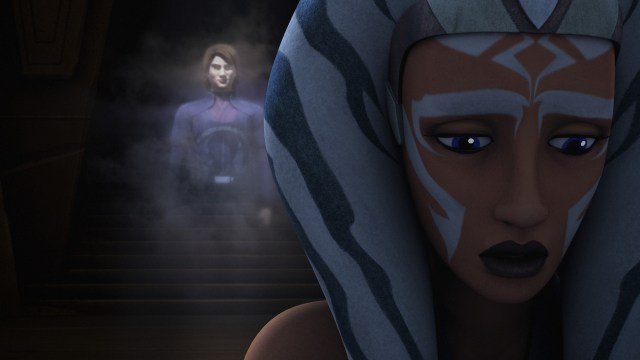 We know how the story goes by now: Luke Skywalker lets go of his anger, refuses to kill his father, and motivates Anakin Skywalker to overthrow Emperor Palpatine, bringing him back from the Dark Side of the Force.

That’s how Anakin was redeemed from an in-universe perspective, but in the real world, where things like Internet chatter, screenwriters, and fan conventions exist, Anakin’s redemption came from another character—one who wasn’t even created by the time George Lucas put the finishing touches on Revenge of the Sith.

When Lucas finished his prequel trilogy, its inherent structure made it challenging for audiences to empathize with Anakin. In The Phantom Menace, he’s essentially a plot device. In Attack of the Clones, he’s portrayed as a petulant, impulsive, and immature teenager, despite—or perhaps because of—his Force abilities and mentoring from Palpatine. Then there’s a huge jump to Revenge of the Sith, where he’s a buddy-buddy “brother” to Obi-Wan Kenobi, a hero with humility and humor … for the first half, anyway. Then things go just a little downhill for him.

The problem with the large gap between Episodes 2 and 3 is that Anakin’s arc is essentially missing. We see the beginning; we see the end, but we don’t get any of his transformation from A to B. Thus, audiences had a hard time connecting with the character.

Enter Ahsoka Tano, Anakin’s Padawan learner. Created specifically for the animated The Clone Wars series, Ahsoka is the novice among familiar characters, allowing us to experience the things that Obi-Wan Kenobi told us about Anakin in the original trilogy. While this is a bit of retconning, let’s face it: Every successive Star Wars thing tends to retcon to some degree. So disregarding the fact that it was made following the prequel trilogy, consider how essential Ahsoka is to completing Anakin’s character, giving us more than a hundred episodes to bridge the gap between Attack of the Clones and Revenge of the Sith.

Anakin’s fall is the linchpin for the entire series, and his turn needs to carry the weight of such importance. As the audience surrogate, Ahsoka’s role is absolutely critical because what she sees, feels, and believes about Anakin Skywalker translates directly to us:

Anakin as a Leader

When we left Anakin in Attack of the Clones, he was an impulsive-yet-powerful Padawan. In order to accept him as a Republic general and Obi-Wan’s spiritual “brother,” we need to understand how it happened. From her introduction in the admittedly mediocre The Clone Wars film to the final frame of season five, Ahsoka is side-by-side with Anakin as he transforms from hesitant partner to a leader. This starts with his reluctant acceptance of a Padawan, but evolves organically into a relationship of trust, friendship, and confidence. With Ahsoka, it’s a two-way street between them, and even from their rocky start, you can see that Anakin is not a typical Jedi; he combines his feelings—those pesky things that the Jedi are always trying to get rid of—with his skills and experience, all tempered with his growing maturity, and perhaps his leadership approach was the right way for the Order all along.

Anakin as a Mentor

The Jedi Order is static and dogmatic, even with someone like Obi-Wan Kenobi. As Anakin mentored Ahsoka, we saw someone who used instinct coupled with the rules to get the job done. In the pair of episodes that conclude season three, Ahsoka is separated from Anakin and has to protect younglings from Trandoshan hunters. When they are reunited, Anakin ponders his inability to protect his Padawan (a common theme for the character) but Ahsoka assures him that his training and guidance got her and the younglings through it. “You already did everything you could,” she reassures her master, “everything you had to do. When I was out there alone, all I had was your training and the lessons you taught me, and because of you, I did survive. And not only that, I was able to lead others to survive as well.”

This is a particularly important part of Anakin’s character growth. As an audience, we begin to understand that not only are the Jedi severely flawed and blinded by their own dogma, Anakin’s humanity and empathy are constantly seeking ways around that to help Ahsoka, not just because she’s his Padawan, but because he cares about her. This is a constant theme throughout The Clone Wars, and when integrated into Revenge of the Sith, it creates his fatal flaw. Anakin’s distrust and frustration with the Order is so much more palpable to the audience, particularly after the devastating final scenes of season five.

Anakin as a Friend

During Ahsoka’s appearance in Rebels, Ezra asks her about Anakin. “What surprised people was how kind he was,” she tells the young apprentice. “He cared deeply about his friends, looked out for them until the end.”

We see many examples of this across the span of The Clone Wars. For Ahsoka in particular, this is delivered early on in the second season’s opening Holocron Heist trilogy. Here, Anakin and Ahsoka are in a no-win situation with bounty hunter Cad Bane, and Anakin decides to hand over one of the Jedi Order’s most-guarded possessions (a holocron detailing the whereabouts of Force-sensitive children) in order to save her—a far cry from the moment in Attack of the Clones when he reluctantly agrees with Obi-Wan to not let his personal feelings get in the way of  the mission. Over the course of The Clone Wars, we see that while duty is important to Anakin, trust and loyalty are even more so.

It’s critical to understand the weight of this aspect to Anakin’s personality, an element that wasn’t given proper time to develop in the films. In Revenge of the Sith, we’re asked to believe that Anakin chose the Dark Side to prevent his wife from dying—strong motivation for sure, especially when coupled with seeds of Jedi distrust and Palpatine in the “cool uncle” role—but through The Clone Wars, we see how far Anakin will go for his friends and fellow soldiers, even if they’re clonetroopers. That makes the sudden choice in Revenge of the Sith for a war-weary hero surrounded by rigid dogma and nonsensical rules (see Yoda’s response to Ahsoka at the end of season five) much easier to comprehend.

Anakin as an Equal

Though still a Padawan at the end of season five, Ahsoka and Anakin viewed each other as equals, filled with respect and admiration for each other’s abilities and humanity. This is best exemplified by their final scene together.

As Anakin pleads with her to stay in the Order, he hints to his own inner conflict, one driven by his secret marriage to Padme and his growing frustration of the dogmatic Jedi—themes that come to a head in Revenge of the Sith. In two words, Ahsoka sums up how important Anakin is to her: “I know.”

In that moment, we understand that Ahsoka has protected Anakin’s secret all along, just as Anakin sought to protect his Padawan on missions and from the overbearing aspects of the Jedi. At this point, Ahsoka and Anakin have both grown tremendously, taking the audience on two distinct journeys that are also critically inseparable, and at the end, we finally see through Ahsoka’s eyes the person that Anakin Skywalker was always meant to be.

Ahsoka stands as a great character with a complete arc in her own right; she is much more than merely a plot device for Anakin, and it’s well worth your time to get acquainted with her. However, for viewers familiar only with Anakin’s journey from the films, she perhaps more than anyone else—Obi-Wan, Padme, Palpatine—brings balance to the Force by creating the necessary foil for his growth. Get to know Ahsoka, and by the end of it, you’ll like Anakin a hell of a lot more, and you’ll also understand why Ahsoka’s return in Rebels brought many fans to tears.

How much of an effect has Ahsoka had on Anakin’s character? (Spoiler warning for Rebels season two finale.) During her epic fight with Darth Vader, the moment we saw Anakin’s face through the damaged black helmet, I—and I’m sure many others—felt the twinge of hope that Ahsoka would pull her former master away from the Dark Side. Against all logic, knowing everything that happened before and after, the power of their bond erased all of that for one moment of possibility. That’s a good sign you’ve connected with a character.

If you’re in the mood for a Star Wars marathon with the home release of The Force Awakens but still hesitate about the prequels, I strongly suggest inserting a selection of The Clone Wars episodes between Attack of the Clones and Revenge of the Sith. (Here is an essential episode list and here is a best-of-Ahsoka list.) As I told another Star Wars friend who has avoided the prequels since their theatrical release, it will make you understand and empathize with Anakin on a much stronger level.

And if you’re being a true completionist, the Ahsoka episodes from Rebels are a must for Anakin/Vader’s arc—an absolutely heartbreaking must.