Cut it out with the evil clown already. *shudder* 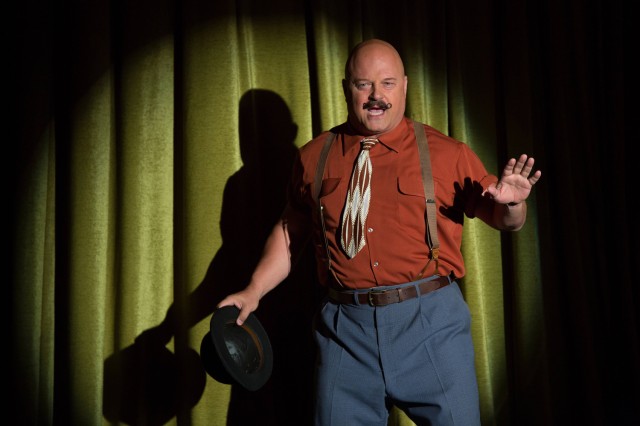 When we last left the hardscrabble sideshow veterans of Freak Show, they were hacking up a killed police officer’s body with an apparent lack of concern for any possible consequences. The first scene of the season’s second episode put to bed my worries that the incident wouldn’t come back to haunt them—a detective arrives promising that that the missing cop, combined with Jupiter’s recent spate of murders and the ease of scapegoating anyone who’s different, ensures they’ll be keeping a very close eye on the them.

Meanwhile, a diner server is making a coffee delivery to an empty toy store’s owner. Much like the milkman scene in the last episode, we immediately know we’re in “something-bad’s-about-to-happen” mode. There is clearly some kind of evil entity present, and it’s announced itself with a wind-up toy robot that walks around around an aisle, blood tracks oozing from its metallic feet. The hapless waiter follows the blood to find the toy store owner’s severed head sitting on a shelf and, in an undeniably unsettling image, Twisty the Clown standing motionless amongst a mannequin tableau underneath a banner reading “Halloween Fun.”

Back at the freak show grounds, the performers are having another wild dinner party and leading a chant of “kill the copper!” Now, I may not be a lawyer, but I’m fairly certain that isn’t advisable behavior for a group under heavy suspicion of murdering a police officer. Jimmy—who, in case you forgot, is the one who actually did it—seems to be the only one sensible enough to understand this. He screams “SHUT UP!” with the same sort of righteous rage we’ve seen from Evan Peters’ characters in Murder House and Asylum.

We then go to the home of Dandy Mott and his mother Gloria, who are sitting at opposite ends of a very long dinner table. It’s early, of course, but I’m feeling like the spoiled, stunted Dandy has the potential to be one of the strangest characters in AHS history. He continuously scrapes his finger over the tines of a fork, declares his dinner of escargot to be “boring,” and literally drinks cognac from a baby bottle. It’s implied that he kills neighborhood cats, which is a less out-of-nowhere revelation than his sudden statement that what he really wants is to be… an actor?

In the first episode of the season, Dandy’s enjoyment of the freak show seemed the result of someone overflowing with privilege taking joy in the exploitation of unusual people. In the second episode, the character makes a jarring pivot—he now claims what he really wants is to be in the freak show himself. Jimmy, who embodies multiple voice-of-reason roles in this single episode, hits him with a truth bomb: Dandy doesn’t recognize how lucky he is to not have to live the unglamorous, oppressed life the freak show performers must.

It’s an interesting idea that probably would have been more thought-provoking if the sheltered Dandy was motivated by seeing the sense of community the “freaks” share in the face of discrimination. As it is, Dandy’s only given reason is a misbegotten desire to be a star, which is flimsily established and, seeing how the performers are generally regarded by the public, makes very little sense. Of course, it’s becoming apparent that that goes for much of what happens in Dandy’s head.

Dandy’s attempts to join the freak show are DOA, but they aren’t for two more veteran performers who make their debuts in this episode: Dell, a strongman played by Michael Chiklis, and his wife Desiree, played by Angela Bassett. If you saw any of the promos for Freak Show, you know Desiree has three breasts. What I was not expecting at all was to learn that Desiree also possesses both female and male sex organs. In a flashback, it’s shown that Desiree used this condition to be a sort of intermediate step for gay men who felt forced to “become” straight, which is certainly indicative of the American horror story LGBT people were living at the time.

Dell used to be married to Kathy Bates’ bearded lady Ethel, is apparently Jimmy’s father, and tried to strangle Jimmy to death as a baby. That sets up a tense relationship between the two (though whether Jimmy knows about the attempted strangling is unclear), culminating in Dell helping Jimmy and company get thrown out of a diner. That scene was a clear parallel to the sit-ins of the civil rights movement, which felt far too obvious and heavy-handed to me.

The Twisty storyline–which continues to have little to do with the freak show—continues when Gloria spots him on the street while driving her right-hand drive car. Seeing Twisty, whose makeup looks months old and whose filthy clothes are speckled with blood, her first inclination is to ask if he does parties, “for children.” The child in this case is Dandy, whom it seems has always desired his own private clown. Twisty comes to the Mott mansion but leaves when Dandy discovers that his bag is filled with murderous sharp instruments, knocking Dandy out with a juggling pin; fascinated, Dandy runs to the swamp after him after regaining consciousness.

In the swamp, the two kids Twisty has imprisoned are hatching an escape plan. Twisty arrives with the toy robot from the store and seems, for a second, genuinely disappointed that the children are not amused by it or Twisty’s awkward attempt to emulate its movements. When one of the kids smacks him in the face with a wooden plank, his mask falls off. Ryan Murphy said before the season that what’s under his mask would cause viewers to “faint in terror,” but it was a bit underwhelming for me—it was not much of a stretch to expect that the mask covered a mouth that was basically missing everything but teeth and some very infected looking scraps of skin.

As the kids make a run for it, Dandy intercepts one, deduces that Twisty has been holding her prisoner and, in a chilling moment, makes the instant decision to return her to whence she came rather than help her. The Twisty-Dandy-freak show connection is now becoming a bit clearer—there’s no question Dandy is rapidly approaching the realm of villainy.

It’s now time for another freak show performance, featuring another anachronistic musical number after last week’s David Bowie extravaganza. It turns out that Dot has a beautiful singing voice, while Bette is comically terrible. They collaborate on a rendition of Fiona Apple’s 1997 hit “Criminal,” with Dot excelling throughout and Bette only joining meekly on choruses. We get the sense that Dot is starting to come around on this whole show business thing.

But stardom-obsessed Bette isn’t happy that her sister is getting all the acclaim (deserved though it may be). Elsa, apparently worried that Dot is upstaging her as well, steps in to exploit this situation—she tells Bette, while Dot is sleeping, that Dot has a “dark soul” and gives Bette a knife. To do… what, exactly? Strained as their relationship sometimes is, it’s hard to imagine Bette seriously harming the person she shares a body with. Then again, Dot did stab Bette after Bette killed their mother in episode 1, so there is precedent for this sort of thing.

Finally, the cops come back, after having arrested “Meep the Geek” (who only says “meep”) for the detective’s murder in the last episode. Jimmy had planted the cop’s badge in Dell’s trailer, only for Dell to cruelly pass it off to the utterly innocent Meep. Meep is killed in jail and has his body dumped at the freak show by the police, providing a depressing end to what was overall a sloppy and unfocused episode. Let’s hope next week’s, which will feature the introduction of Denis O’Hare’s and Emma Roberts’ characters, will be better.