Agents of SHIELD Recap: “The Team”

Did somebody order the red herring? 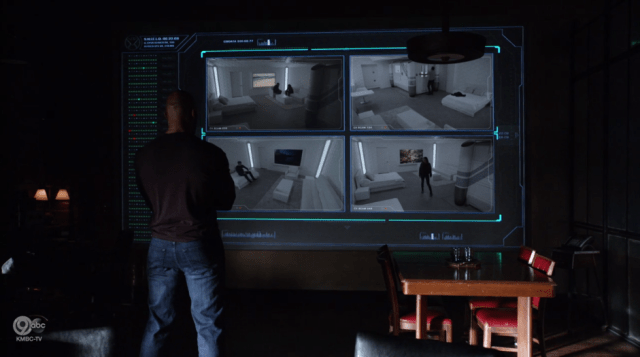 After a few weeks of table-setting, Agents of SHIELD promptly flips that table, leaving silverware and glasses scattered all over the floor as we head into our final season arc. In the process it gives us one of its tensest and most entertaining episodes to date, packed with intrigue, false leads, and enough twists to fill a 1960s dance hall.

Secret Warriors, assemble! Daisy and Lincoln call on Joey and Elena (using Super Subtle Watches that definitely don’t brightly flash the SHIELD logo, I mean we’re spies for heaven’s sake, that would be a ridiculous tool to give our undercover superhuman team!), forcing Elena to miss her bus and Joey to ditch his date. This had better be worth it, you two!

The human SHIELD teammates regroup as well, leading to a fast-paced rescue mission that takes surprisingly little of the episode’s time. They even manage to kill Mr. Freeze and capture Malick in the process. And  Hive is … completely chill about this? 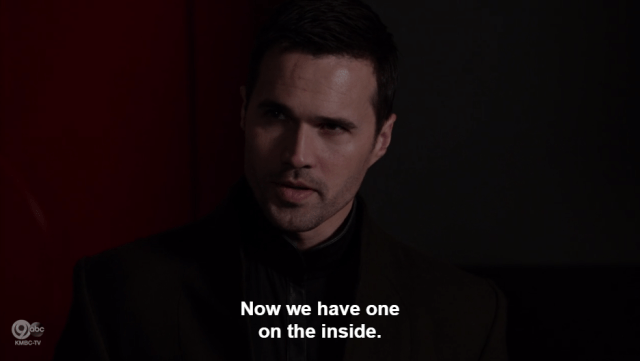 Then we get to spend the rest of the episode trying to figure out which of the Secret Warriors has joined the HiveMind! After a conversation with Malick, who warns that all the Inhumans will come to “worship” Hive, the human SHIELD agents are soon quickly flipping out, locking down the base and frantically searching for some way to figure out who Hive might have turned.

FitzSimmons figure out that Hive’s “sway” works like an infection—in essence, one of Hive’s bug-bits (gross!) digs into the Inhumans’ brains (gross!) and influences them (gross!)—but they have no way of knowing who it is or how to cure it. And as Mack points out, once you start looking for suspicious behavior, everyone seems suspicious: Joey is fidgety and withdrawn after his first kill, difficult for the others to find; Elena is aggressive and understandably wary of government agents, eager to leave the base; Lincoln keeps playing with the Inhuman technology, keeping secrets from Daisy, and trying to pump May full of pain killers; and Daisy is … pretty normal, actually? The most suspicious behavior of all! 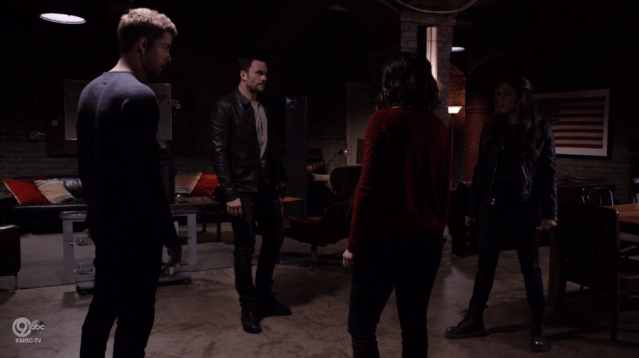 Did everyone at home spend most of this episode playing “I Spy” right along with our SHIELD team? I know I did, and I was about 90% sure it was Lincoln, since he’d locked eyes with Hive a couple episodes ago and has been rather dodgy ever since. Pretty much I followed the same line of logic Coulson eventually does, and had myself a little “I CALLED IT” dance party when they find the Kreeball in Lincoln’s backpack. (I also laughed hysterically, just as I promised I would if Daisy’s new love interest ended up going Dark Side, too.) Granted, both Coulson and I end up being wrong, but hey, at least we’ll be wrong together!

Before that can happen, though, the lights have to go off in the base, Malick has to get dead, and the tentative trust built between the humans and Inhumans has to collapse. Eventually Daisy works secretly with Coulson to lead her team into a containment chamber, where Coulson exposes Lincoln and puts all the Inhumans under quarantine. The episode even has the gall to give Coulson one of his classic Wrap-Up Monologues and FitzSimmons a cute post-mission romantic beat, leading us to think the mystery is resolved and the episode is over. Except … 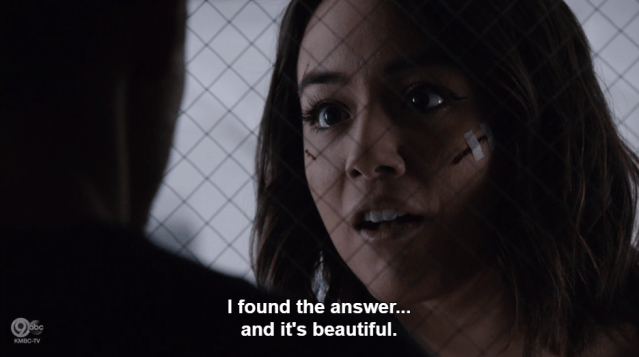 Agent SHOCK! Turns out Daisy was part of the HiveMind all along! Since Coulson’s convinced she’s unaffected, he never considers the fact that she designed the containment chamber security and could easily hack into it—which she totally does, breaking out and offering Lincoln a chance to come with her and have Hive fill his own “emptiness” as well.

But Lincoln isn’t into betrayal, especially the kind where Daisy uses his poor reputation to frame him for her own crimes, and refuses. So Daisy takes the Kreeball and the terrigen crystals and peaces out, burying the SHIELD hangar in her wake. Joey is never gonna get that second date at this rate! 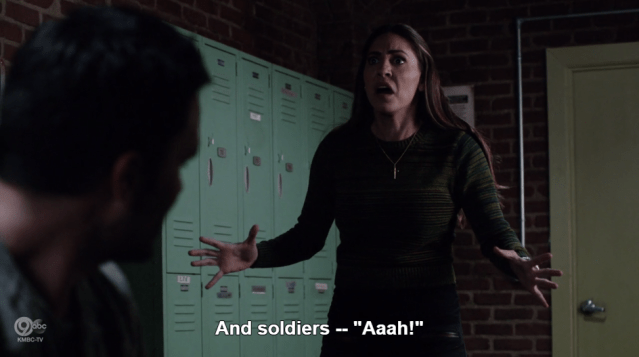 But first, a moment to appreciate how much fun Elena has being a superhero.

I have a lot of scattered thoughts about this one, the first being that it zipped right by and I had a great time watching it. AoS does “inside man” episodes pretty regularly, so I suppose I could criticize it for redundancy, but it generally does them well so I have a hard time complaining about it. During Season One, what really made me like this series was the way its creators understood story tropes and audience expectations and did their best to play with them. Skye and Ward hook up? Nah, he’s a bad guy! Skye loves him anyway? Nah, she thinks he’s an asshole! Not to say the writing is perfect (look no further than their handling of Rosalind’s and Stephanie’s deaths for proof that it isn’t) but there’s often an attempt to swerve away from the obvious answer that I find rather refreshing.

AoS has, at different times, gone with both the expected and unexpected answer, which helps maintain tension during episodes like these. In the back of my head I kept thinking how much more interesting it would be if Daisy was the one who got turned by Hive, but then deciding the creators would never actually go that route because Protagonist!, so it would likely be Lincoln based on previous information. That they went with Daisy (and had her use that previous information to throw Team SHIELD off the scent as well) gives this season a lot of new potential, and I’m both nervous and excited to see how that develops. 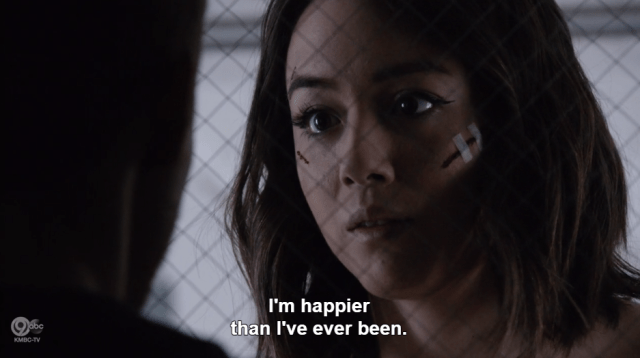 There’s a question here, I think, of how much is Hive directly controlling the Inhumans he draws to him and how much is him choosing Inhumans who are already drawn to his ideals. Some commenters here have suggested Daisy might go “the Magneto route,” and while I don’t see it going quite that far, I do think she’s shown herself to have some of the same flashes of protectiveness towards other Inhumans, arrogance about the advantages her powers give her, and a willingness to use extreme measures to achieve her goals.

Add to that her lifelong search for a home and the sense of “otherness” that being an Inhuman has brought to her relationship with the rest of her SHIELD family, and it’s not hard to see how Hive’s message of Inhuman pride and unity could be appealing to her, making it all the easier for the infection to take hold. Based on the episode previews it looks like Daisy will be struggling between her personal loyalties and Hive’s control/influence, and I’m curious to see how that battle plays out.

On the creepier side of the equation, Hive has all of Ward’s memories and even referred to Daisy as “Skye” at the end there. We’ve seen how the people he’s possessed have affected his own personality and decisions in the past. I very badly need AoS to stay away from any “romantic” (read: rape) subplots here, as the infection/mind control element leads to all kinds of issues with consent that I have no interest in seeing play out, particularly given AoS‘s poor track record with mind control seduction story lines. 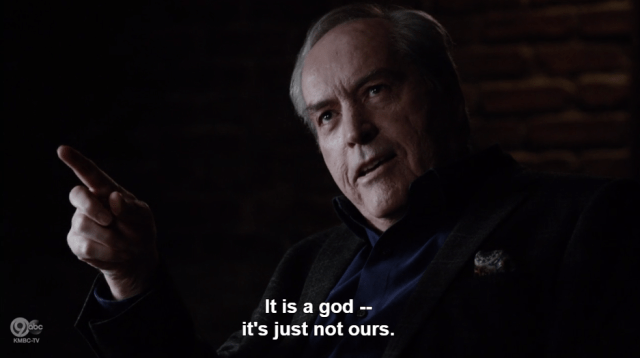 Outside of Daisy’s story line, this episode is largely about faith, whether that’s on the cosmic or personal scale. Malick likens Hive to both a god and a devil who “lets you destroy your own world.” Coulson doesn’t put much trust in higher powers, but he does have faith in his team, a faith that’s tested and arguably broken this week thanks to the rift between the Inhumans and the humans and the secrets that build up because of it. Both sides feel like they’re under attack for different reasons, and the withheld information (even if it’s withheld for the “right reasons,” as May suggests) only increases that feeling. SHIELD is desperately low on field agents right now, and this week may have lost them some much-needed extra help.

The other tidbit that stuck with me has to do with fridging and vengeance. I mentioned at the end of last half-season that, between Ward, Hunter, Coulson, and Fitz, I wondered if AoS was trying to explore White Knight Syndrome in some fashion—and maybe critique it, given how poorly all their plans tended to turn out. That comes up again this week when Coulson gets Malick to work with him by drawing direct parallels between Rosalind and Stephanie, encouraging Malick to channel his anger and focus on revenge. 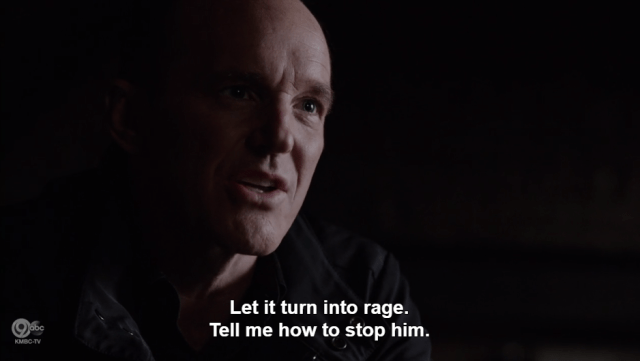 Nice work on the half-light, half-shadow composition during these Coulson/Malick scenes, by the way.

But then, at the end of the episode, when he’s talking to Daisy about Lincoln’s supposed infection, he tells her the opposite:

I know you want to destroy Hive for what he’s done to you. We all do, and we will. I know you want revenge. But we have to be better. We have to do what’s best for the team.

Is this unintentional hypocrisy? Or is it just Coulson being pragmatic and saying what needs to be said to the right people? Or does it speak to a deeper double standard, either a gap between humans and Inhumans, or SHIELD and Hydra’s ethical codes, or even one between men and women? That, to Coulson, men are allowed (or even expected) to “make it personal” and seek revenge for their troubled or fallen ladies, but that women are expected to be “better than that” and remain detached when a man they care about is the victim?

Honestly, I’m not sure. I’m not sure what this contradiction is intended to imply, or even if it’s intentional at all. But intentional or not, it sure does seem to come up pretty often (you can throw May and Andrew into the mix while we’re at it, actually), so it’s something I wanted to point out and keep an eye on to see how (or if) the season continues to address it.