Agents of SHIELD Recap: “Purpose in the Machine” 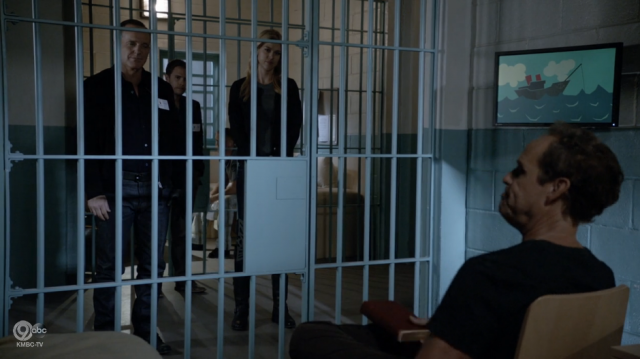 The memory of Season One’s snail’s pace must still haunt the writer’s room, because we waste no time this week moving all of our story lines forward and wrapping up some at a blazingly fast pace. While I’ve enjoyed SHIELD a lot more since it became plot-focused, I do have to wonder if we didn’t lose some opportunities this week, particularly when it comes to developing characters. But hey—at least May’s back!

We begin this one in 1839 Gloucester at a castle hosting the world’s worst lottery. Some poor schmuck draws the white stone and gets a first-class, one-way ticket to the Desert Otherworld. (I swear I’m not trying to sneak a Night Vale reference into every post, but if the allusion fits … ) Then, it’s back to base so everyone can yank Fitz out of the monolith cage before it tries to swallow him, too. But what’s this? Sand on his adorable cheek?! Quickly! To the Science Screens! 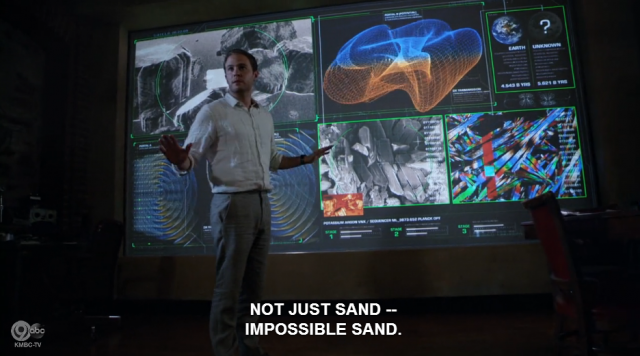 “Yes, sand—which reminds me, what’s a scientist gotta theorize to get a prosciutto and buffalo mozzarella with pesto aioli up in here?”

It predates the earth by a billion years, meaning it came from another planet, meaning that portal goes both ways, meaning we can get! Simmons! BACK! Now let’s all have conversations as we walk down corridors on our way to rescuing her!

There’s disagreements among the team this week, but they’re the kind that exist among respected colleagues and good friends rather than the uneasy tension from previous seasons. Daisy and Mack discuss the merits of rebuilding the team quickly versus carefully. Coulson calls Bobbi out on helping Fitz behind his back, but smiles as he does it. Hunter admits he’d rather Bobbi stay in the lab where it’s safer (tell that to Simmons), but it’s more just him being honest than trying to pressure her into anything. And of course everybody yells at Fitz for attacking the Very Hungry Monolith but then immediately volunteer to help him with his newest theory. Despite everyone’s increasing desperation and sense of helplessness in the face of constant new threats, the bonds between our teammates are strong, and that’s heartening to see. 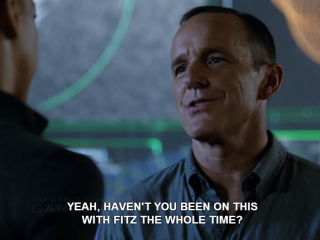 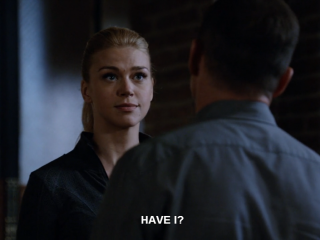 And now that we’ve established those bonds, let’s split everyone up and tackle plots A, B, C, and kinda-sorta D! The story lines all bounce around in the episode proper, but in the interest of coherency let’s just lay them all out individually here.

Last we have Ward {insert fist shakes and colorful insults here}, who’s gone Full Mustache Twirl in his quest to cull the ranks and rebuild HYDRA. The organization is basically full of spoiled rich kids at this point, and Ward is big into utility and people earning their keep, not just coasting by on their inheritances. It makes sense given his backstory, and I don’t even entirely disagree with his philosophy here, it’s just that his methods are a little…

In other words, Ward continues to be a real good antagonist, and it’s fun watching the dead-eyed bastard work this week. During his “recruiting missions” he comes across a kid listed as “Alexander” in the credits but who reveals himself to be Werner von Strucker (Spencer Treat Clark), son of Wolfgang, whom you may remember as that guy who helped Ultron with his prison graffiti art project a few months back. By the end of the episode he’ll have gone undercover as one of Dr. Garner’s students, so keep an eye on that story as it develops.

Speaking of Garner, he’s back at the SHIELD base to evaluate Joey and tell the audience how the rest of the team is doing. I like Garner, but a lot of his scenes this week feel like a shortcut to character development, or maybe like the writers don’t trust us to see Coulson’s desperation to keep his team together (despite him saying he “won’t lose anyone else” to both Fitz and Daisy) or the pressure Daisy’s under to form her own group of agents. I mean, there’s so much work to do, and she doesn’t even have a name for her team ye— 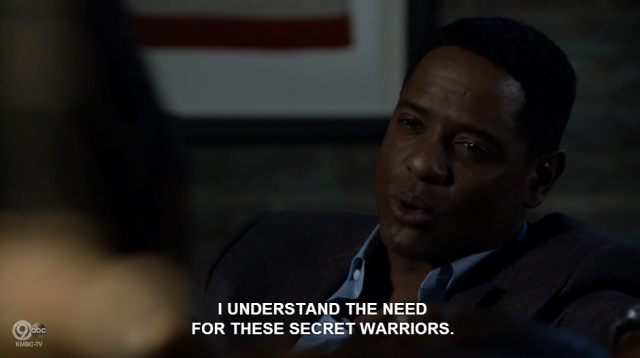 HE SAID IT! HE SAID THE SECRET WORDS!

Garner also won’t tell us jack about May, so we have to spend some time with her and her dad (the wonderful James Hong), who’s recovering from a hit-and-run accident that May worries could have been a result of Ward targeting SHIELD family members. Wen and Hong are great together, but May’s story line feels oddly… incomplete? Or cobbled-together? She’s AWOL, except not really because Coulson’s had at least some contact with her; she knew about Simmons but still stayed away from base; and she’s broken it off with Garner again, though we don’t get any proper details about why (and it sure seems a lot more serious than “the old spark just ain’t there anymore”).

She tells her father she wants to see if she can live a normal life, and he thinks she “feels damaged in some way” because of her failed relationship with Garner, which in turn relates to her parents’ divorce and her mom putting her work before her personal life, but… I mean, it’s complicated and messy and a bit contradictory, and actual human motivations are, too, so that’s fine, it’s just… the whole thing doesn’t quite fit May’s character, I guess. But maybe that’s just me. 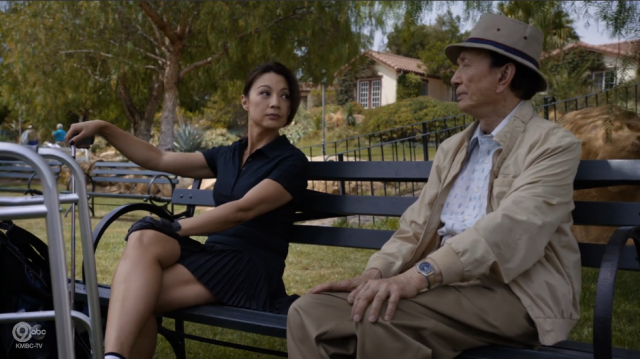 How does May make even golf apparel look deadly? The woman has a gift, I tell you.

Personal difficulties with May’s arc aside, her story does end on an exciting note, as Hunter recruits May to join him in his Ward-Killin’ Mission, and May agrees after a little father-daughter pep talk. So, yay! Hunter/May undercover road trip, y’all! And who doesn’t love a mission that ends in Ward getting shot again?

Meanwhile in our main story, Coulson, Bobbi, and Fitz go to visit Dr. Randolph (welcome back, Peter MacNicol!), the local Asgardian last seen in Season One’s “The Well.” He’s chilling in a Norse prison to avoid attention from all those jumpy, xenophobic government agencies. He refuses to help on the grounds of “not my problem,” but Coulson—in possibly his darkest moment to date—threatens to turn him over to said agencies if he doesn’t cooperate. Which leads to my favorite exchange of the episode:

“You’re different now. You know that?”

“One must accommodate the times or things get messy.” 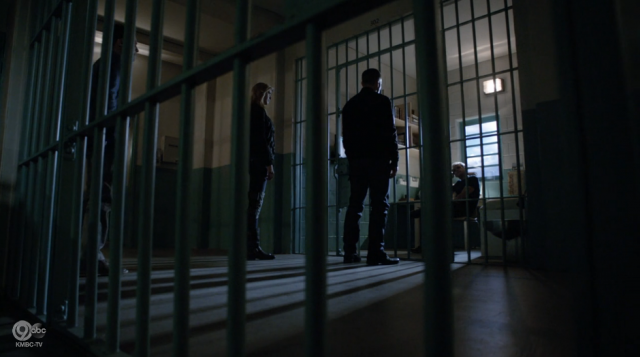 After some, ah, healthy debate, Randolph agrees to help rescue Simmons as long as they destroy the monolith once she’s safe. Using Fitz’s collected clues, Randolph leads them to a castle in Gloucester that has the same Hebrew word written above two of its doorways. Randolph translates this as “death by punishment” (as opposed to the lesser-known Hebrew word meaning “death by kitten snuggles”), which doesn’t tell us much but does point the team to a secret tunnel leading to a secret monolith containment chamber.

Mack and Daisy fly out with the monolith in tow and help get all the old Frankensteinian technology up and running. And heyyy, it works!… At least until both the machine and Daisy collapse from all the sonic pulses resonating in the room. Deduction tells us the monolith is triggered by a particular frequency, and Daisy can use her powers to make it happen, albeit with some nosebleeds along the way.

She opens the portal so they can send in a droOH, NOPE, THERE GOES FITZ. Of COURSE there goes Fitz! Why did none of you chain him to the wall before you started this experiment?! So now Daisy has to keep the portal open long enough for the team to pull Fitz back through, and meanwhile the winch system is collapsing and Fitz is wandering around in the Desert Otherworld screaming Simmons’s name, and Simmons is screaming back (yay for flares!), and their hands are meeting—and coming apart!—and meeting again!—and Daisy’s losing control!—and they’re pulling them back in!—and…and…!

And after your recapper revives from multiple heart attacks, the portal collapses (in every sense of the word), leaving nothing but a pile of rubble at the bottom of the hole. Well hey, at least this means we’ll get The Amazing Adventures of FitzSimmons in the Desert Otherworld, right? 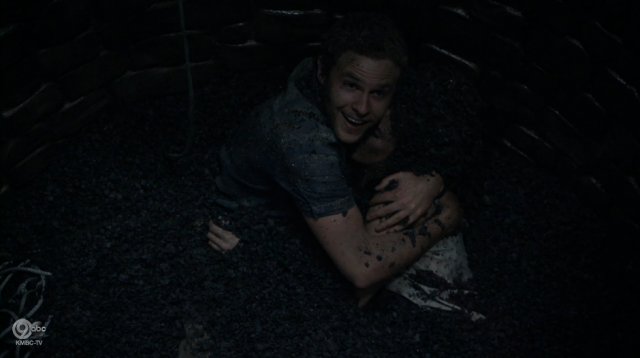 Well, if none of you are gonna say it, then I will: “GO TEAM SHIELD!”

So yeah. Simmons is back! That was, er, quick? And with the portal gone, it seems like movement between the two worlds has been halted at least for the time being. Hard to say how this whole adventure is going to affect the story going forward (other than Simmons’ own character arc, obviously), and the team definitely needed a win at this point, but I’m still a little bummed we’re not going to get more from the other side of the monolith, at least not right away.

Granted, it’s too early in the season for me to make any judgments, and I do have a lot of faith in the writers at this point. That said, I confess this episode left me a little concerned about SHIELD’s ability to balance fast-paced stories with meaningful character writing. I hope we get some flashbacks that help fill out both Simmons’ and May’s off-screen stories, otherwise this episode is going to feel like a lot of frantic rewriting and plot-point-dropping, and that’d be a real shame.