Sparks fly. It's quite shocking. 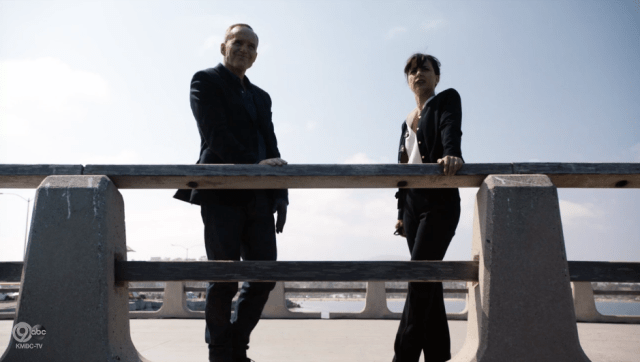 SHIELD has spent the past two seasons developing and solidifying its central cast into a group of people who, short-sighted and secretive though they can often be, are genuinely trying to do the right thing by both the world and one another. We’ve seen how much they care about each other (often to a fault), and it makes any tension between them feel like family members fighting, any downtime like hanging out on the couch with your own friends, and any awkwardness like you just stuck your own foot in your mouth.

And this is a very good thing, because it means even episodes like this one where the central story moves so fast it barely makes sense, never mind resonates, can still mostly work because of the interactions and emotional beats woven into the various plots. So while I’m still struggling to give anything remotely resembling a damn about Lincoln (I swear I’m trying, you guys, I really am!), I’m fully invested in our SHIELD family, and that holds the show together even when a few seams start to stretch like they did this week. 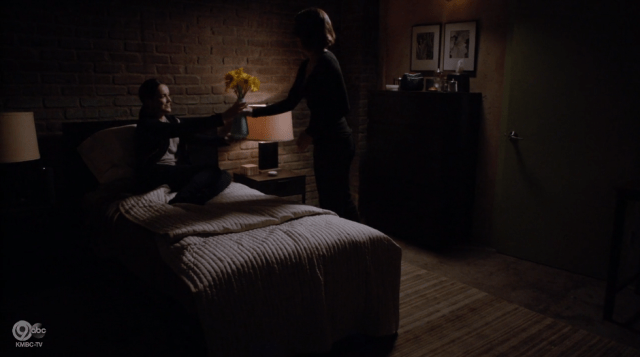 We’ll get to that central story and Lincoln in a moment. But first, the subplots! Beginning with our team furthest from base, Hunter and May meet up with one of Hunter’s contacts (“Spud”) to work their way into HYDRA. But Ward ain’t just giving out membership cards, so they have to prove themselves in Fight Club. Hunter acknowledges that May’s the better fighter, but “generic white dude” draws less attention, so he steps into the ring and faces off against Spud himself. Hunter gets the piss knocked out of him, but does manage to “win” (killing Spud in the process and earning one of many Looks of Grave Concern from May) and earns himself a place within HYDRA.

Meanwhile May gets aggressively propositioned by a trio of punks, takes them “someplace private,” and proceeds to kick their teeth in. It’s an overused device, but it gives SHIELD an excuse for the season’s first May Is a Badass moment, and coupled with the Fight Club really hammers home the point that HYDRA is Central HQ for toxic masculinity, placing it in stark contrast to the relatively gender-neutral SHIELD or even ATCU. Hunter and May are walking different but risky paths, and Hunter’s might just be the more dangerous of the two. 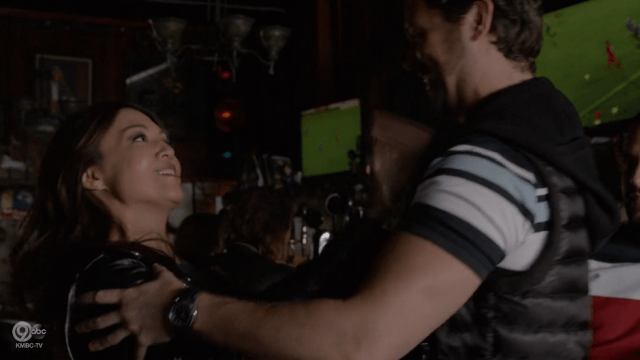 At base (and in The Feelsiest of story lines), Simmons is trying to recover. She’s in a constant state of heightened awareness, jumping at the slightest noise and prone to sensory overload, and only looks comfortable when she’s alone (the shower) or in a small, private setting (her room with Daisy). The lab is overwhelming, and the presence of the monolith rubble even more so. The camera jerks, shakes, and blurs whenever sliding into Simmons’s “perspective,” and Elizabeth Henstridge’s body language is tight and brittle, perpetually coiled, ready to fight or flee as needed. It makes her scenes the most charged and affecting this week.

Despite everyone congratulating Fitz on his rescue mission, he’s feeling pretty useless himself, unsure how to help with Simmons’s recovery. Bobbi suggests he give Simmons “something to look forward to” rather than remind her of the time she lost, so Fitz… 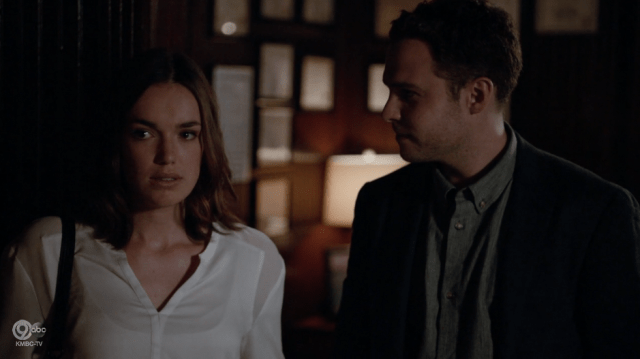 Oh, Fitz. Sweet Fitz. He means well. He does. I don’t even think he intended for this to be a date in the romantic sense. I think he just wanted to let Simmons have a quiet, “normal” evening out, and he was worried about too many people or noises upsetting her, so he sort of… well, best intentions aside, the net effect is Grand Romantic Gesture, and you can see Simmons slowly beginning to panic from the moment they walk in and the place is empty.

She’s in no way ready for a romantic relationship, and despite her gratitude and obvious affection towards Fitz, it’s too much and she breaks down in the restaurant. In Fitz’s defense, he handles this perfectly, neither pressing her to talk or cheer up but simply providing a shoulder to cry on. Still, it’s clear this moment has triggered something in Simmons, because the next time we see her she’s in the lab frantically trying to get the monolith up and running again. She “has to go back,” she says, and it’s unclear whether this is due to Plot or trauma at this point. Knowing SHIELD, my guess is a combination of the two. 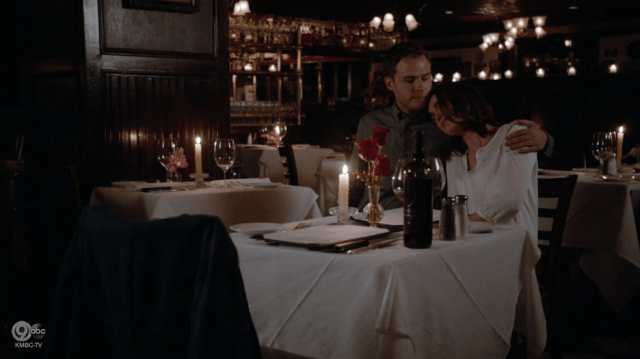 I’m definitely not standing next to my computer and hugging Simmons from the other side, no no, certainly not.

Which brings us at last to our main story: SHIELD, ATCU, and the Inhuman who Lincs them together. Lightning Bender Lincoln is on the run and Daisy wants to keep him safe, but it’s hard to get someone to trust you after your teammates slapped a tracking device on him when he wasn’t looking. Daisy is understandably upset that Coulson gave her authority over the Inhumans and then immediately went over her head, but Coulson is too busy scrambling for some semblance of control to really listen or even care.

In essence, he (and Mack) put physical safety over emotional well-being, while Daisy understands that the two are intricately connected, with the latter often essential to the former. There’s also an underlying tension developing regarding everyone’s priorities, as Coulson is focused on keeping his team safe first and everyone else second, while Daisy is more willing to risk herself for the benefit of others. But for now, there’s a Lincoln to find, so table this clash for a later date. 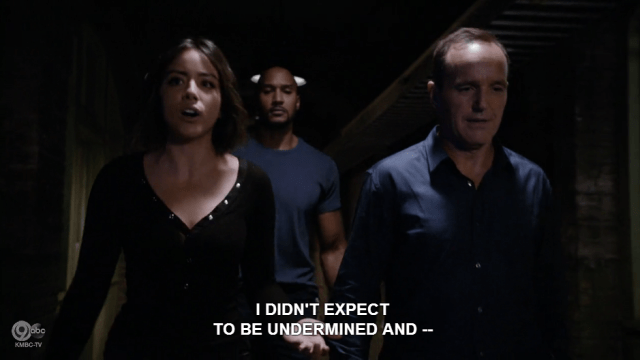 “And stop reading my diary while you’re it at, SHIELDad!”

On the outskirts of Chicago, Lincoln meets up with a man (John) who’s super-important to him. The dialogue drops some breadcrumbs, such as John’s first question being “Have you been drinking?” and Lincoln talking about how John “saved his life more than once.” Personal headcanon: Lincoln’s a recovering alcoholic and John’s his AA sponsor, which adds a unique layer to their interactions and Linc’s character.

But that’s all headcanon—the script itself is frustratingly vague about their relationship, and since this is the first time we’ve ever seen them interact, it’s hard to feel upset when John immediately (and I mean immediately) turns on Lincoln. And then Lincoln scares him with lightning and he has a heart attack and dies. Womp womp. Sorry, but the whole thing is so out-of-nowhere that it’s actually kind of funny. It certainly doesn’t carry any emotional weight, that’s for sure. I want to care about Lincoln, but you gotta give me something to hang on to, writers, not just vague asides about past troubles. 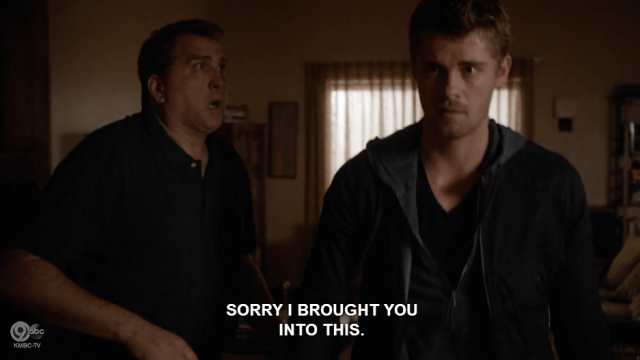 “EVERYONE BETRAY ME. I FED UP WITH THIS WORLD.”

Backed in a corner, Lincoln finally reaches out to Daisy for help, so she and Mack head over to extract him while Coulson has a clandestine meeting with ATCU leader Rosalind Price. Coulson likes ogling her car. She likes joking about his hand (to be fair, once she finds out the injury was a recent one, she apologizes and backs off). Clark Gregg and Constance Zimmer banter exceedingly well, half-flirting and half-threatening with every line (if they don’t make out at some point I might be a little disappointed), and their scenes hum with electricity because of it.

Oh, and speaking of electricity, Daisy has found Lincoln. She gives him a big pep talk about how he helped her make sense of her life as an Inhuman and says she wants him to do that for others, too. She’s passionate and hopeful, he’s grief-stricken and desperate, and it’s actually a pretty moving moment between a former mentee and her mentor… until this happens: 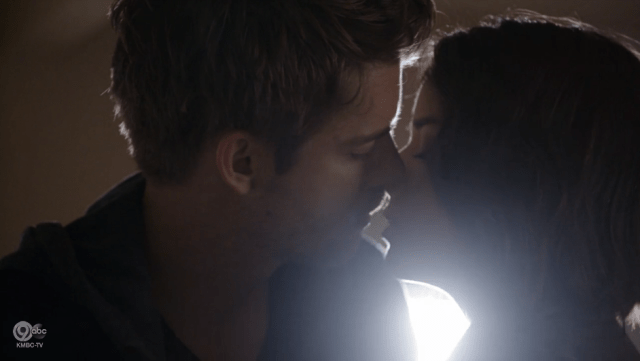 Daisy really has a thing for blandly angsty dudes, don’t she?

I groaned out loud, because while I sorta like these two as friends, a romance between them feels forced and half-hearted, the expected route rather than the organic one. First Ward, now Lincoln? Chloe Bennet can play off just about everyone on the show at this point, but it’s like there’s a concentrated effort to pair her with the one person on-screen she doesn’t have chemistry with.

Okay, sorry. /End grumbling. However you feel about it, their Moment doesn’t last, because Coulson decides to turn Lincoln over to the ATCU in exchange for Rosalind keeping Daisy off the Most Wanted list. It’s hard to fault Coulson for prioritizing his own people’s safety, especially given how much they’ve lost in recent months, but it’s very much the move of an overwhelmed man protecting the things in front of him rather than the head of an undercover agency focusing on the big picture. Rosalind coolly tells him that, for her, “It’s not personal. It’s work.” That’s clearly not the case for him, and it puts him at a disadvantage all episode.

The plan falls apart when Lincoln escapes, but Coulson still manages to keep Daisy safe by offering his expertise to the ATCU. So our secret and public Inhuman teams will be working together, at least for the time being. This will almost certainly lead to even deeper schisms between Coulson and Daisy, but if it gets me more Gregg/Zimmer banter, I’m certainly not complaining.