I'M NOT CRYING; YOU'RE CRYING. 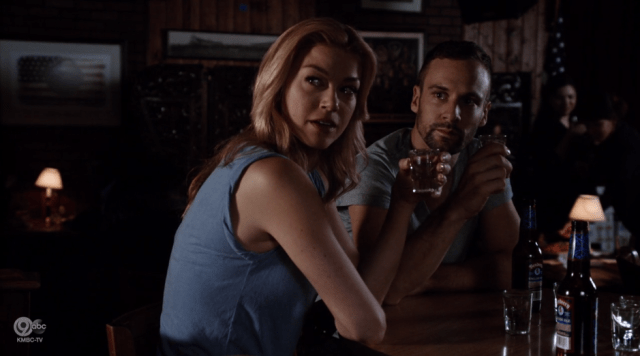 We knew this moment was coming, but I wasn’t expecting it to come quite so soon. Still, an attempted coup, an extended interrogation, and a creepy Inhuman power sounds like a good way to go out in style. Hit the jump to see our agents punch some people, a shadow … and my heart.

Agents of SHIELD busts out two of its favorite narrative techniques for this one: Timeline bouncing and dialog montages. I do so love their dialog montages. In the present, Bobbi and Hunter are in holding and being questioned by Interpol about the murder of a high-ranking Russian official. And how did get here? Well, it all started with a little Siberian mushroom-picking expedition, 34 hours ago … 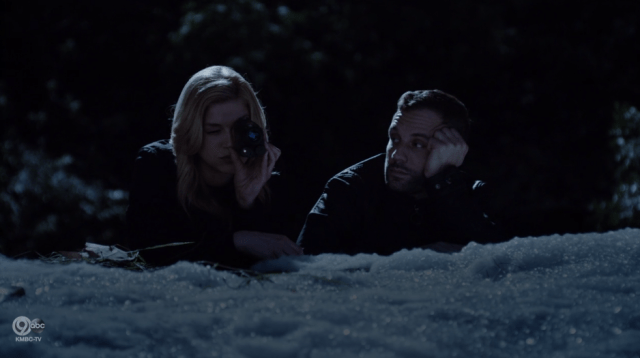 Well, no. I mean, obviously not. Bobbi and Hunter hitched a ride on Malick’s plane and tailed him to the future site of the Inhuman “sanctuary,” which looks a whole lot like either a prison camp or a military base. The rest of the SHIELD team joins them to infiltrate the base, gather intel, and rescue a captured Inhuman. As is customary, this plan turns to rubbish in a hurry, because there’s already a big ol’ political SNAFU at the base: General Androvich is an Inhuman and wasn’t taking kindly to the Prime Minister’s attache’s opinion about Inhumans, so he murdered him. Just another quiet day in Russia.

Petrov wants Malick to use his connections to smooth things over, but Malick is like, “Nah, I’m kinda digging this whole murder thing” and unleashes Androvich to assassinate the PM during his visit to the base. Which is happening—oh look! Now! So! What’s the plan, team?! 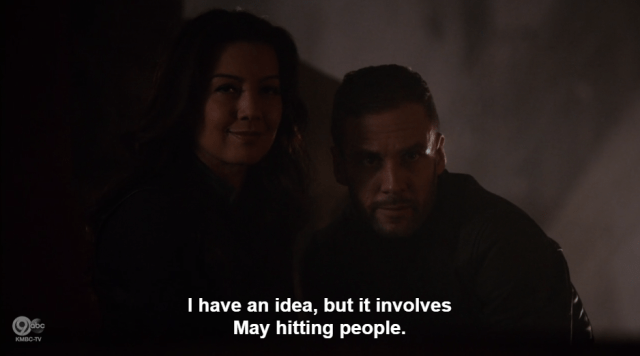 May just can’t stay mad at him.

Team SHIELD moves in to stop Androvich and protect Russian Prime Minister Olshenko, a soulless politician only concerned with appearances and his own career. (So, a step up from their previous PM, then.) The rest of the episode is a fair amount of running through poorly guarded corridors and beating up Russian insurgents. It’s pretty fun. Also: Daisy versus Cyrillic. Also: Bobbi in an ushanka.

Then things get serious when Androvich unleashes his Inhuman ability to create a “sentient dark force that can shift its density at will” (thaaaanks, Jemma!). After a chaotic fight sequence between Bobbi/Daisy and The Shadow, using a lot of swooping cameras and speed ramping to show how disorienting this is for our agents, Daisy and Mack both get more-or-less taken out. Androvich goes after the PM (and Hunter), so Bobbi does the only thing she can to save them: Kills Androvich and surrenders.

And in the present timeline, Interpol is trying to get Bobbi and Hunter to admit to the existence of SHIELD, which is quickly becoming the world’s worst-kept secret. Bobbi just wants to know if she can has cheezburger (she can’t), and Hunter dazzles the inquisitor with soup recipes. 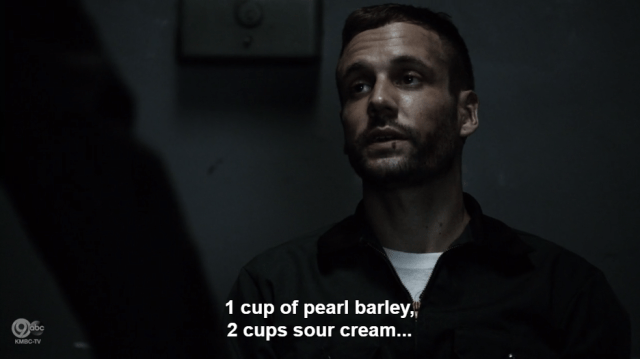 “You should come to one of my mushroom-themed dinner parties. They’re really fun, guy.”

The two refuse to give up SHIELD, not even when the other’s life is threatened, but they’re in a losing situation: The U.S. can’t claim them as agents, they can’t announce themselves a part of a “terrorist organization,” and Coulson’s escape plan involves basically giving up their lives and careers, changing their identities and trapping them in desk jobs. So they find the best path possible, stick to their alibi, and walk free—but as civilians, cut off from their career and friends.

Boy, what a fantastic final scene. AoS is occasionally hamstrung by its episodic network-TV format (allow me to sigh wistfully as I imagine a world where this show is on Netflix and this mission is allowed to carry over seamlessly into the next episode a la Daredevil‘s story structure), and events escalated and then deescalated rather abruptly this week as a result—but dammit if they didn’t pull it all together, taking the time for a farewell that managed to be poignant and affecting despite nobody actually dying and nobody actually saying goodbye.

I was lukewarm when I first heard about the upcoming spin-off, but the writers have done a great job developing Bobbi and Hunter into flawed but incredibly likable people, and both Adrianne Palicki and Nick Blood have embodied their characters with humor, warmth, and steel, proving they have the chops to carry both the action-packed and emotional sides of a story. I’m going to miss the hell out of them here (as will our agents, seeing as how they’ve just lost their languages expert), but this does give AoS‘s massive cast a little breathing room, and it’s nice to know they’ll be back. See you on Marvel’s Most Wanted, you snarky, adorable love birds. 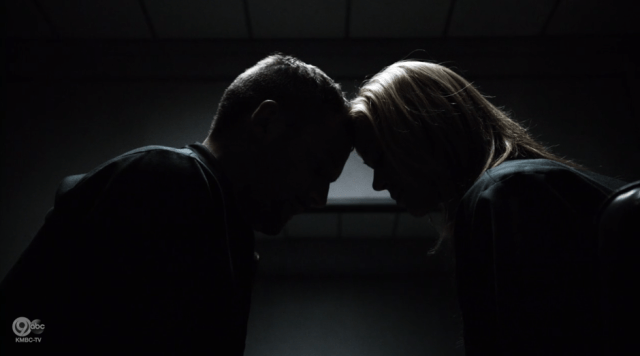 Other than spy capers and pure air-fanning, hankie-chewing Emotions!, this week sees more of our seasonal themes about moral compromise and sacrifice and a question of where you draw the line between fighting the bad guys and becoming them. It’s a bit chilling when May echoes Malick and Ward’s “greater good” (ah-hem) from last week, although for May you get the sense that, while she genuinely does believe what she says, it’s also something of a coping mechanism, a way to deal with the losses she’s sustained throughout her career. Her scene with Hunter was an important one, a reminder that there are people who care about her as a person and not just as a rock star ass-kicker. (Although, I mean, they certainly care about that, too.)

I suspect we’ll continue to see this conflict explored, especially given that both sides see themselves as ultimately doing the right thing. What comes out of it this week, though, is a kind of compromise. Bobbi’s shown herself capable of acting the dispassionate agent, sacrificing herself or others for the sake of the mission, so it’s no surprise she keeps mum even when Hunter’s life is threatened; but Hunter, who fights for far more personal reasons, shows himself equally capable of holding up under pressure, not for some abstract “good” but for the very real and immediate goal of protecting his friends.

It’s true that Hunter’s emotional attachments have caused problems in the past (so have some of the other agents’ detachment and reluctance to trust others), but they’re also a form of strength, and this week highlights that. Bobbi and Hunter’s complementary natures will help them in their spin-off series, but I’d also like to think they can be an example to the rest of the SHIELD team as well about finding the balance between personal ties and professionalism. Maybe it’s okay to make a few friends along the way after all. 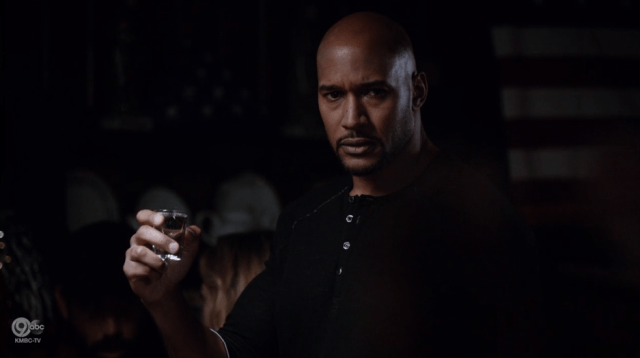 Good night and joy be with you all.