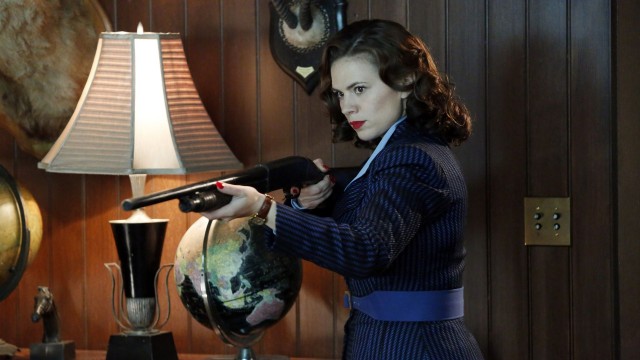 In this week’s thrilling conclusion to Agent Carter, there’s no time for jokes because we’ve got a city to save, a deeply flawed inventor to exonerate, and Angie has got to find a new apartment.

We open on the Thrilling Captain America Adventure Hour, where Nurse Betty Carver waits simperingly for Captain America to save her yet again. Good thing that’s fiction, because the aftermath of Ivchenko and Dottie’s movie theater experiment is not pretty. Searching the scene of the crime, Agent Sousa finds the Item Seventeen canister and accidentally sprays himself. He flies into a rage and tries to kill Agent Thompson, but thankfully Carter is on hand to save Thompson yet again.

Meanwhile, in another part of the city, Dottie and Ivchenko are pulled over. Dottie’s as quick on the uptake as Peggy is, though, and she overpowers the cop without messing up a hair on her expertly coiffed head. (Side note: while I like the fact that Agent Carter at least tries to include a racially diverse cast, if there’s a next season I’d really like to see that reflected in the main characters. The Redshirts Of Color trope is getting tedious.)

Sousa comes to, strapped to a bed, recovered from Item Seventeen. This enables the S.S.R. to figure out exactly what happened in the movie theater. And just in time, too, as who should drop by but Howard Stark, who heard somebody needed an exposition dump about one of his inventions!

After Carter, Thompson, and Sousa confront him about all the blood on his hands (two dead S.S.R. men, a theater full of innocent people). He agrees, he’s a terrible person. But there are more important things to worry about, like that exposition dump. It turns out that Item Seventeen is Midnight Oil, a substance Stark invented to erase soldiers’ need for sleep. Instead, it turned them into rage bombs. This, Stark reveals, was the monster behind the Battle of Finow. He told the Russians Midnight Oil wasn’t ready for prime time yet, but they didn’t listen.

Oh, and by Russians, I mean Dr. Ivchenko. Except that’s not his real name. He’s actually Johann Fenhoff, which is what we’re going to call him going forward. Also, the silent Leviathan agents are survivors of the Midnight Oil who had to have their vocal chords removed for reasons that are never entirely explained.

Speaking of Fenhoff, he and Dottie have just pulled up to an airplane hangar when he hears over the radio that Stark is back in town. “Our plans have changed,” he tells Dottie after she’s just gone to all the trouble of murdering the guy guarding the planes.

Howard also has a plan. He’s going to hold a press conference warning everyone about Fenhoff and Midnight Oil. At the press conference, Thompson officially vindicates Stark on behalf of the S.S.R., despite the fact that Stark is an annoying asshole I wish would go away forever. Man, who would have thought, at the beginning of all this, I would have been rooting for Howard Stark and hating Agent Thompson. My, how the tables have turned. 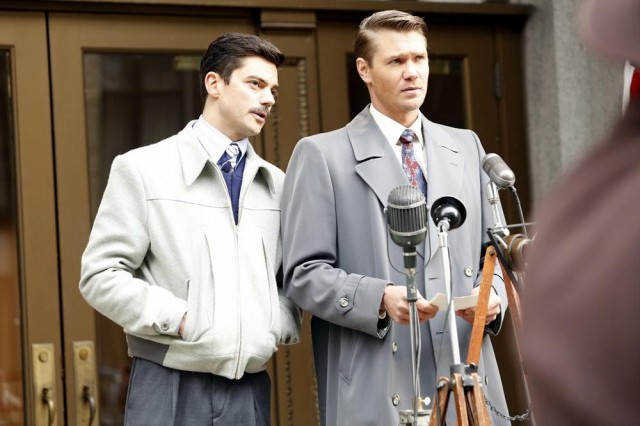 While Stark is hamming it up, shots are fired! The S.S.R. agents manage to get Howard away from the sniper, but in the process they put him in a car with the same cop who pulled Dottie and Fenhoff over last night. He’s been hypnotized to do their bidding and drives off with Stark before anyone really knows what’s going on.

Across the street, Carter and Thompson search a hotel room for the source of the gunshots, which turns out to be a sniper rifle set on some kind of auto mode. The assassination attempt was a diversion meant to get Stark into the hands of Fenhoff. But what’s his next move? Where will the Midnight Oil attack take place? Then they realize it’s the anniversary of V-E Day, and Fenhoff’s plan is to unleash the gas on Times Square where thousands of people will be gathered.

While they’re figuring all this out, Sousa is on the trail of that cop car. But he’s one step behind, as the car is empty except for the dead cop. But where is Stark? Getting pistol whipped by Dottie for not remembering her name, that’s where. Turns out, they went on a date six months ago. I felt like this was a little out of character for Dottie, but it’s fun to watch and gives both of them something to do while the wheels of the plot turn.

As it turns out, Stark had another vault. This one is for his planes and cars, and he stupidly showed it off to Dottie when they hooked up. But being a womanizing creep isn’t the only reason he’s tied to a chair. Fenhoff has big plans for him. You see, he saw what happened at the Battle of Finow, he was there with a gas mask though his brother wasn’t so lucky. He knows all about Stark’s terrible inventions and how often they turn out to be deadly. And now he’s going to make Stark pay for all the lives he’s taken.

Fenhoff hypnotizes Stark by having him remember Steve Rogers’ plane crash. I’m a little confused by this sequence, since it implies Howard knew where Steve’s plane was and that he was still alive. Unless this vision is meant to be a fantasy, unlike all the others? Anyway, Howard hops into a plane and takes off for what he thinks is the Arctic Circle to make a dramatic rescue. Except it’s really Times Square. I’ll avoid making any sort of joke equating the two, because I live in Los Angeles where it’s 70 degrees and sunny right now.

Luckily, Carter and the S.S.R. are on the trail. Jarvis is the only one of them who knows how to fly a plane (I guess there really is something Peggy Carter can’t do), so he volunteers to shoot down his own boss if it becomes necessary. While he does that, Peggy finds Dottie and they finally fight it out. It’s fun to see Dottie fighting Buffy-style, punctuating her slick moves with sassy little quips. Dottie shouldn’t be too confident, though, because while Peggy isn’t the prettiest fighter, she takes advantage of Dottie’s monologue to catch her off guard and kick her out a window. Peggy rushes to the radio and patches through to Stark, who is deep in his vision of rescuing Cap. 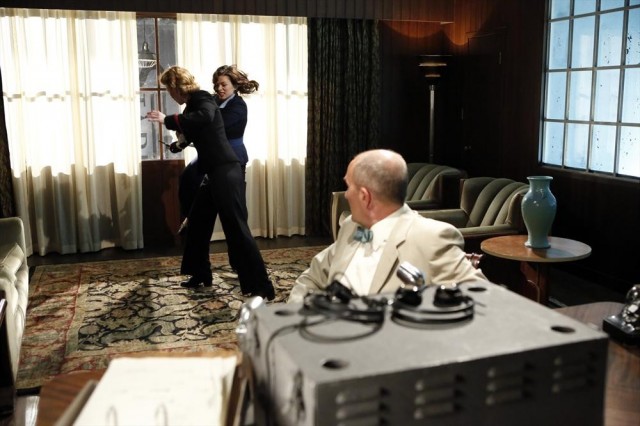 In another part of the hangar, Sousa finds Fenhoff, who has already found, and knocked out, Thompson. Fenhoff attempts to brainwash Sousa, which should be easy since he has so many demons from the war. However, knowing that the key to Fenhoff’s hypnotism is his voice, Sousa plugged his ears. Because he is awesome. He takes Fenhoff out.

Flying above New York Harbor, Jarvis has Stark’s plane in his sights. It’s time to pull the trigger but it’s ultimately Peggy’s call. Stark really believes Cap is alive, and Peggy knows if she can convince him they need to move on and let Steve be at peace, she has a chance of breaking the brainwashing. She talks it out, and it’s clear Howard isn’t the only one she’s trying to convince that it’s time to let Captain America go. And it works! Stark snaps out of it just in time to spare Manhattan from being the setting of 28 Days Later.

A new day dawns in New York City, and Peggy is finally recognized as the heroic S.S.R. agent she is. But Dottie has disappeared from where she fell, off to fight another day. And even better, while the S.S.R. might know the truth about Peggy’s role in saving the city and praises her for it, the US government gives all the credit to Thompson. It’s almost enough to make you hate him again.

THEN SOUSA ASKS PEGGY OUT AND I DIED.

Sadly, Peggy turns him down, and Sousa looks extremely heartbroken. But Peggy smiles, at least? I can’t decide exactly what’s happening in this scene. The realist in me knows that Peggy and Daniel aren’t going to be together, and he’s just the cute guy she gets to turn down because Peggy Carter don’t need no man. The fangirl in me, however, is wondering whether maybe Peggy didn’t realize he was into her until right now? And maybe that smile was a sudden flash of “OMG SOMEBODY LIKES ME!” Maybe she goes to meet up with Angie, and the whole ride there she’s playing through every interaction they’ve ever had, and thinking about exactly how cute Daniel Sousa is, and what even is the S.S.R. policy on interoffice relationships? Or, more likely, she’s just smiling because the friend she’s meeting up with later is Angie. And Angie rules.

But don’t worry, folks, there’s service for everyone’s ship, because it turns out that, to make up for ruining their reputation with Miriam Fry back at the Griffith, Howard Stark is putting Peggy and Angie up in one of his swankier Manhattan homes. Together. Because they’re roommates. And besties. And maybe more, if you’re into the Peggy/Angie thing. And who isn’t?

Peggy and Jarvis have an emotional goodbye, and he returns the last vial of Steve Rogers’ blood to her without anyone else’s knowledge. She decides to pour it off the Brooklyn Bridge and into the East River rather than holding on to it. Peggy Carter has moved on. The End. Carter out, y’all.

But this is a Marvel show, so you know there’s a tag.

Fenhoff is bringing some serious Hannibal Lecter realness to his time in prison. And who’s his new cell mate? None other than Dr. Zola, the creepy architect of Hydra’s post-war transition. You see, Fenhoff and Zola have tons to talk about. And Zola brought a pen and paper so they can pass ominous notes about world domination. Because, yeah, if you thought Fenhoff’s brainwashing technique seemed similar to Hydra’s you were right.

The credits roll, and I, for one, am staying tuned for Season Two. Hint hint, Marvel and ABC.

What did you guys think of the last episode? Exactly how long do you think Dottie’s going to lay low before she starts causing trouble again? Will Angie get her big break? Is Thompson going to go back to being an asshole? And exactly how does all this fit in with Carter and Stark eventually founding S.H.I.E.L.D.?