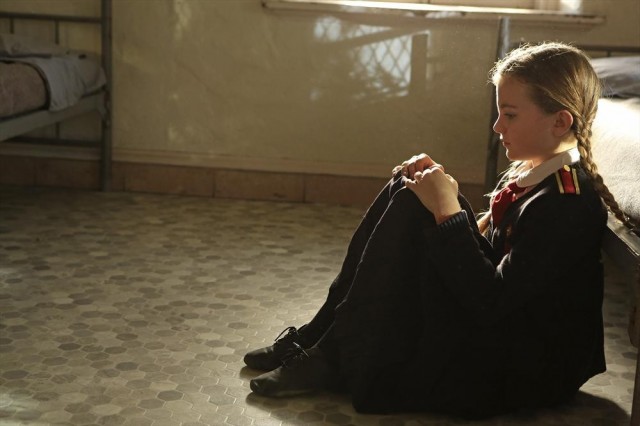 In this week’s episode of Agent Carter, Agent Thompson finally gets Peggy’s response to his big speech about gender roles from last week. But first, our fave Avenger! The Howling Commandos! An elite finishing school for tiny assassins! Can you even?!

Wide-eyed young Dottie isn’t the only character whose secret identity is revealed this week. With every major subplot, from Carter’s proof that she can handle herself in battle to Thompson’s war story to Souza’s big discovery, we’re finally getting to the truth behind our main characters. (Well, the truth about everyone except Howard Stark, but my guess is that the writers are saving that for later.)

We open in the Soviet Union, 1937, at an institutional all-girls school that teaches practical skills that are important for any child. Fundamentals such as reciting the script of Snow White and snapping the neck of the little girl you just shared your snack with. This is a flashback to the childhood of everyone’s favorite corn-fed psycho killer, Dottie Underwood.

In the next scene, Dottie uses this training to steal the key to Peggy’s apartment while the two women share an identical hunk of bread to the one we just saw young Dottie split with her childhood sparring partner. “I can never finish the whole thing.” Just in case you hadn’t already figured out there’s eventually going to be a showdown between these two.

Back at the S.S.R, Dooley, Thompson, and the boys are hot on the leads provided by the magic Soviet typewriter. Unfortunately, their codebreaker is stuck in Kill All Nazis mode and doesn’t understand that all the Alan Turing lifehacks in the world aren’t going to work on a Russian encryption. Peggy arrives on a mission to prove herself once and for all, unlocks the code like it’s her jewelry box, and informs Dooley that she will be going on the ensuing recon trip to Belarus. With her old war buddies the Howling Commandos, no less.

But first, she has to suit up in a co-ed locker room while simultaneously putting up with Thompson and his hilarious bro antics. When Souza drops in to supply mission intel, Thompson tricks him into walking in on Carter in her underwear. Which not only serves to remind both Carter and Souza of their respective places in the S.S.R. pecking order, but also gives Souza an important clue about the identity of his blond mystery woman.

After a parachute jump that hints at the reveal of Thompson’s big secret, we’re reunited with the Howling Commandos. Or, really, we’re reunited with Dum Dum Dugan and a bunch of redshirts that we’re told are Howling Commandos. No Morita, and, no, I’m pretty sure that’s not Antoine Triplett’s grandpa. But these new Commandos are as good as the ones we’re already familiar with, and so we’re headed behind the Iron Curtain into Belarus on the trail of the smoking gun that will prove Stark is selling weapons to the Soviets.

Instead, what Carter and her team find is the creepy assassin school from Dottie’s flashback, home to one last murderous little girl, a mad genius engineer (who might have super powers?), and said engineer’s psychiatrist. Because sure. Why not?

Meanwhile, back in the land of the free and the home of the brave, people are starting to put two and two together about Peggy. At the S.S.R. offices, Souza realizes the truth about the woman who beat them to Stark’s crazy implosion bomb in that nightclub: that was no blond; it was Peggy. This looks bad. And at The Griffith, Dottie uses Peggy’s keys to snoop around in her apartment. Not only does she find the photos of Stark’s inventions from last week (one of which she pockets), she also discovers that Peggy and Captain America were once sitting in a tree, K-I-S-S-I-N-G. This also looks bad.

Luckily for Agent Carter, she’s making some discoveries of her own about Thompson. Remember last week, when I wondered about that scene between the two of them where Thompson insisted that essentialist gender norms are here to stay? This entire episode acts as a foil to that scene, as Peggy demands and then earns the respect of her S.S.R. colleagues through sheer grit. Exactly as Thompson said she would never be able to do.

It turns out that Thompson wasn’t mansplaining to Carter in that scene back at the office. He was telling her the things he’s learned as someone who came back from the war and discovered that, despite the truth about what happened in Okinawa, he’s been cast as a paper hero. He’s living the masculine version of Peggy’s post-war feminine hell. They’re both forced to keep silent about the truths the war taught them in service to gendered ideals. She has to wear the mask of a fragile girl when she knows she fought alongside a superhero. He has to playact as a war hero when he knows he was a coward. In Belarus, they reveal themselves to each other, and while I am not at all boarding the Peggy/Jack ship, it’s a much more intimate reveal than Dan Souza seeing Peggy in her slip. I’m left wondering exactly what kind of alliance Carter and Thompson will forge going forward.

But enough women’s studies. Peggy owns in the big fight scene, and Stark’s name is somewhat cleared through the discovery that his super-weapon plans were most likely stolen and not purchased. The Soviet psychiatrist defects to help the S.S.R. unravel the mystery of Leviathan. Souza looks adorable when he’s all morally tormented. Dooley and Jarvis forge a truce through a veiled reference to Rashomon. Most importantly, Agent Carter earns her coworkers’ respect, will hopefully never have to order lunch again, and, in the process, teaches Agent Thompson that the way to deal with unrealistic gender norms is to smash them.

If you like dystopian modernist literature and were intrigued by the Soviet brainwashing academy in this episode, you’re going to enjoy this week’s homework. It’s We, by Yevgeny Zamyatin. We is set in an oppressive global empire called the One State, an ultra-efficient urban landscape where everyone is known by a number, reproduction is strictly controlled, and people are brainwashed to become “tractors in human form”. It’s considered a forerunner of Nineteen Eighty-Four and is pretty obviously an inspiration for Agent Carter’s depiction of the Red Room. And maybe more of Leviathan, going forward?

What did you think of this episode? Most bad-ass Agent Carter yet, or am I wrong?