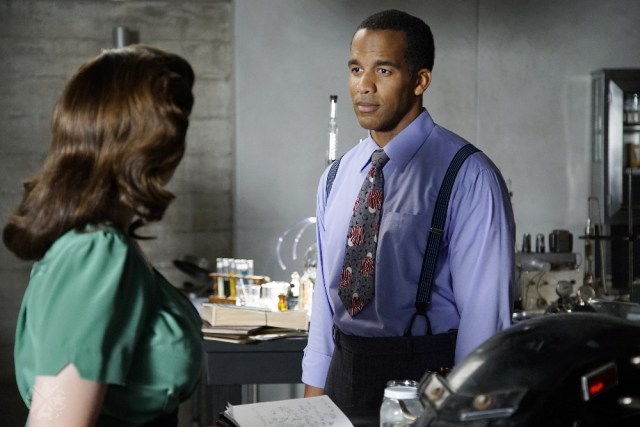 Happy Agent Carter Day!! The second season premieres tonight, at last — and Hayley Atwell just shared a whole bunch of new details about newcomer Jason Wilkes (played by Reggie Austin), as well as the new directions the show may take this season. If you want to go into the premiere spoiler-free, don’t read on!

These spoilers are pretty vague, I admit, but I figured a warning can’t hurt. Anyway, Atwell told Variety that one upcoming plot point will involve a love triangle between Peggy, Sousa, and Jason Wilkes.

Well, I think we can say from what we know of Peggy so far, in terms of her attraction to men, is that she loves the underdog. She loves people who have had to fight various forms of adversity and become self-made, because I think that suggests character and a kind of courage, which she admires…

I think she sees in Wilkes someone who, given his race and given the time, the fact that he has been able to create this life for himself as an exceptional scientist in an environment where he had to really fight to win his place there, shows to her a strength of character that she can relate to, that she saw in Steve Rogers, that she sees in Sousa, as well, and that’s what interests her. And I think it’s helped by the fact that he’s really good looking. [Laughs.]

Atwell also mentions that Peggy Carter had one of the first-ever interracial relationships in Marvel Comics canon; in the 1970s, Peggy Carter and Gabriel Jones dated and shared an almost-kiss — all of which was sadly controversial at the time. It makes sense, then, that Agent Carter would be at least as diverse as the 1970s comics, if not more so! You’d think, anyway.

Sounds like the creative team listened to their fans when it came to this, at least according to Atwell:

I spoke to a lot of fans, especially on social media, who really, really wanted more diversity in the second season and that’s something the showrunners felt was not only in answer to the fans, but also an absolute appropriate progression. Since the first season heavily focused on a woman in a man’s world, we’re now going into more diversity and we’re investigating different prejudices within this time, and one of them absolutely would have been race, as we all know…

We also had an African American writer that came on board, we had a female director who directed two of the episodes for the first time. We also had another female writer come on who is Asian — we’ve naturally found within the team that there was more diversity, and I’m not saying that out of it being positive discrimination, it just became a natural way that it developed. So I’m very pleased about that and I think it helps to answer the fans’ ongoing bickering about more diversity and “turn Peggy into a lesbian.” We can’t do everything. We have to feel like we’re telling the story that feels we can really go somewhere with something, so this is what we’ve really held on to this season.

Some may bristle at the suggestion that we’re “bickering” about how much we’d love to see a relationship between Peggy and Angie (c’mon!) — but it’s clear that Hayley Atwell and her colleagues actually do listen to the many criticisms levied against their show, even if they don’t take all of our amazing suggestions. It’s nice to hear that they’ve shaken some things up, too, from the casting office to the writers’ room.

Atwell does clarify later in the interview that she loves her fans’ determination — so don’t change a thing, folks! — “I’ve met a lot of fans in the Marvel Universe at conventions and what I do love about these fans is that they’re bloody outspoken. [Laughs] They know what they like, and they’re very committed, and there’s something to be said for that.”

Damn right! I’m excited to see how it all unfolds this season. Who’s tuning in for Agent Carter tonight?

(via Variety, image via MCU Exchange)