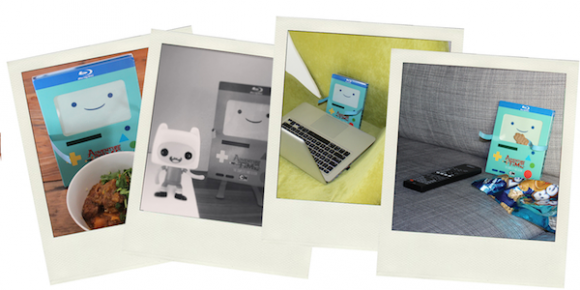 Cartoon Network’s Adventure Time Season 3 was released on blu-ray and DVD this week and I’m super excited because I’m way behind on the animated series. To help celebrate the BMO-centric packaging (freaking adorable), they’re holding a fun photo contest.

So besides the blu-ray being filled with awesome Adventure Time antics and special features like commentary on EVERY EPISODE, it includes a sheet where you can cut out BMO’s arms and legs and create your own BMO! 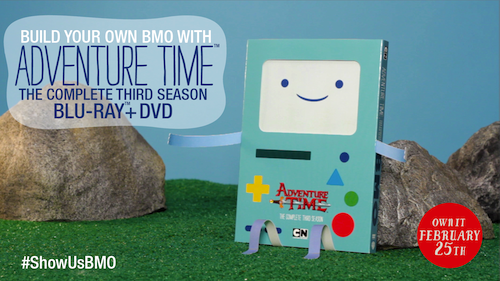 Cartoon Network wants your help in finding out whose BMO is the most adventurous! Snap a photo of BMO giving your dog a hug, updating his Facebook status, playing Adventure Time Card Wars, or helping Finn and Jake defeat Magic Man. Then post it to Facebook with the hashtag #ShowUsBMO and on Friday, March 7th, Cartoon Network will share its favorite B-MOment on its Facebook page with a special shoutout by Niki Yang, the voice of BMO! Just make sure you post your pictures between February 24th and March 4th.

And don’t worry, if you haven’t purchased Season 3 you can still join in on the fun. Cartoon Network has provided a BMO print-out. Adventure Time: The Complete Third Season is available now!