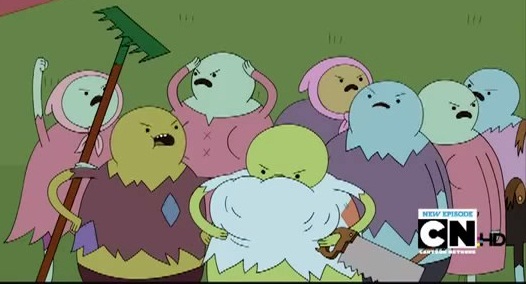 I try not to think too much about Trump supporters. I gave myself permission to pretend they didn’t exist and that Trump wasn’t really the president until 2017. I figured 2016 owed me that much. But during “Stakes,” an 8-episode miniseries within Adventure Time, I couldn’t stop thinking about Trump supporters and their red hats.

During “Marceline The Vampire Queen,” the first part of the miniseries, Marceline, a vampire, is imprisoned by the townspeople. Someone has been draining the town’s livestock of blood, and they’ve decided she’s behind it despite having zero evidence. The townspeople refuse to listen to reason or seek out answers. Instead, they go with the easiest one: kill the bad, scary vampire. Marceline is knocked out, and she wakes to find herself tied to a wooden windmill blade with the sun beginning to rise.

The townspeople, pleased with their accomplishment, begin chanting, “Blow her up! Blow her up! Blow her up!” From my couch, I pictured the “Lock her up” signs that lined the country roads my girlfriend and I drive down on the way to her aunt’s house for family dinner. I saw the phrase on t-shirts at the state fair this fall, and I still see it on social media as Trump supporters attempt to remind their candidate about what he promised.

There’s a difference, though: the townspeople in Adventure Time realize they made a mistake. The leader of the chant, and of the mob, is confused when Finn, the show’s hero, calls him out on his BS.

The leader says, “What? I’m the good guy here!”

There’s a pause. Then the leader says, “Oh flip, you’re right! This is way messed up.”

Now, it’s been long enough since the election that some Trump supporters are realizing that they were wrong about Donald Trump. He has no plans to lock up Hillary Clinton. He has no interest in the working poor, white or not. And he hasn’t drained the swamp; he’s empowered its deadliest creatures. Instead, he’s taking their healthcare (because many somehow didn’t realize Obamacare is the same thing as Affordable Healthcare), he’s filling his cabinet with rich politicians, and he’s thoughtlessly threatening us with every tweet. Whether they’re taking to Twitter to recognize their wrongness or writing rambling Facebook posts to express their rage, there is a definite sense that they do, in fact, know they’ve done something a little bit wrong. But they’re not being wrong in the right way, not yet, anyway—they haven’t owned it in full, and they haven’t apologized.

Trump doesn’t give a shit about the needs of his supporters. He’s all ego, and all about himself. His followers aren’t people; they’re tools and cheerleaders. He yelled whatever it took to get them to yell right back if only to hear his own name shouted by the masses. And now he’s the president.

And it’s their fault. Because they loved it.

But now that they’re realizing that what they thought a Trump presidency would look like (Hillary rotting in a prison cell, the return of coal, white supremacist revolution) isn’t actually on the agenda (not the first two, anyway), they’re not loving it quite so much.

The phrase “lock her up” is one embedded with sexism at best, and at worst, it comes with not only a willingness to sidestep fact, but a deep-seated desire to do so. Trump supporters feel marginalized in the refusal of—what I call with feigned hope—the majority to allow them to mask bigotry behind the guise of opinion. We know at this point that an opinion is not something that dehumanizes one person to empower another. We know that women are people. We know that life does not begin at conception. We know that trans people deserve respect and basic decency. We know that black lives matter.

To live in a society where we keep having the same conversations over and over again while pretending it’s any sign of progress is ignorant and dangerous. At some point a decision has to be made, and these are the right ones. There is, after all, right and wrong. Something that empowers others at the real, deadly expense of others is wrong. I’m not talking, “My heart is broken for aborted babies.” Because, no, your heart’s not broken, it’s fine; you’re sad you can’t control the bodies of others. Others are literally having their hearts broken, their heads broken, their bodies set on fire because they are queer, or trans, or Muslim, or black, or disabled, or brown.

We can’t keep pretending these are the same thing. These concerns don’t hold the same weight. If we have any hope of advancing as a society, we need to be willing to have some sort of moral foundation that we, together, abide by. We need to say that we’re not willing to ignore the suicides and murders of the marginalized because an ignorant majority would rather be coddled than punished for their bigotry. We have to learn.

It’s a heartbreaking reality to see a cartoon more capable of apology than millions of Americans. But it’s our reality. I’m holding out hope that Trump supporters will finally say how messed up this all is, but the damage is done. We’re already burning.

And though I spent the day following Donald Trump’s election huddled in a ball of blankets on my couch, ignoring the emails dinging on my phone, I watched Adventure Time. It felt right, pairing my depression with an apocalyptic cartoon about both world building and world destruction. Adventure Time may not have given me hope, but it did remind me that the end of the world doesn’t always mean the end of all things—that something would survive this even if I didn’t.