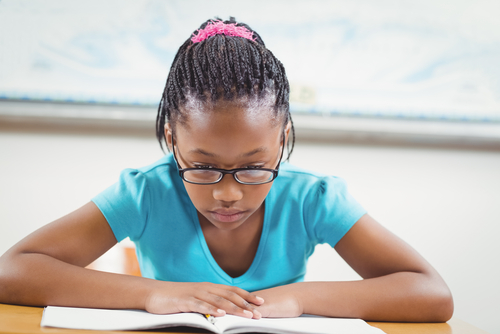 We’ve long known that black boys are seen as older than they are by those in authority, whereas white boys manage to be seen as “boys” well into their twenties (and even thirties), and that this particular manifestation of racial bias affects how black boys are punished for behavior and infractions that would, in white boys, be tolerated or excused because they’re “just kids.” A new study out of Georgetown shows that the same “adultification” is true for black girls.

In this study by the Georgetown Law Center on Poverty and Inequality, titled Girlhood Interrupted: The Erasure of Black Girls’ Childhood, researchers surveyed 325 adults from diverse racial and ethnic backgrounds, many of whom had a high school diploma or higher.

Why is this important? I mean, besides the fact that we have everyone from other parents, to teachers, to law enforcement officials transmitting the message that black girls are unworthy (or, at least, less worthy) of love, nurturing, and support? This affects how black girls are treated, accused, and punished legally.

The study clarifies what this means by starting with the special legal status that children enjoy:

“Children occupy a unique position in our public systems. Once treated as miniature adults, our perception of young people’s innocence and ongoing development has led, over time, to granting children leniency when determining the consequences of their behavior. The special legal status bestowed on youth, in particular, is based on a well-established understanding of children’s social and psychological development—that they should be held less responsible and culpable for their actions, and that they are capable, through the ongoing developmental process, of rehabilitation. These foundational legal and moral principles protect children from criminalization and extend safeguards that shield them from the harsh penalties levied on adults.”

Yet, even as far back as slavery, black children weren’t seen as innocents, even when compared to “miniature adult” white children. The study discusses the fact that child slaves were put to work as young as 2 or 3 years old. They were “[s]ubjected to much of the same dehumanization suffered by Black adults, Black children were rarely perceived as being worthy of playtime and were severely punished for exhibiting normal child-like behaviors.”

Fast forward to the present day, and black girls:

It is heartbreaking to know that little black girls are being handicapped in this way before they even have a chance to define themselves. It’s a bias that we have to fight at all levels. I would encourage anyone reading this to check out the Georgetown report in full. It’s in layperson’s terms, so it’s an easy, if harrowing read.

Whether you’re a parent, a leader in a community organization like the Girl Scouts, a teacher, a school administrator, or in law enforcement, we all have a part to play in ensuring that all children are protected, nurtured, educated, and guided toward being healthy, fully-developed adults. Our country cannot achieve its fullest potential if we continue to allow racism to inform how we treat a significant portion of our children.