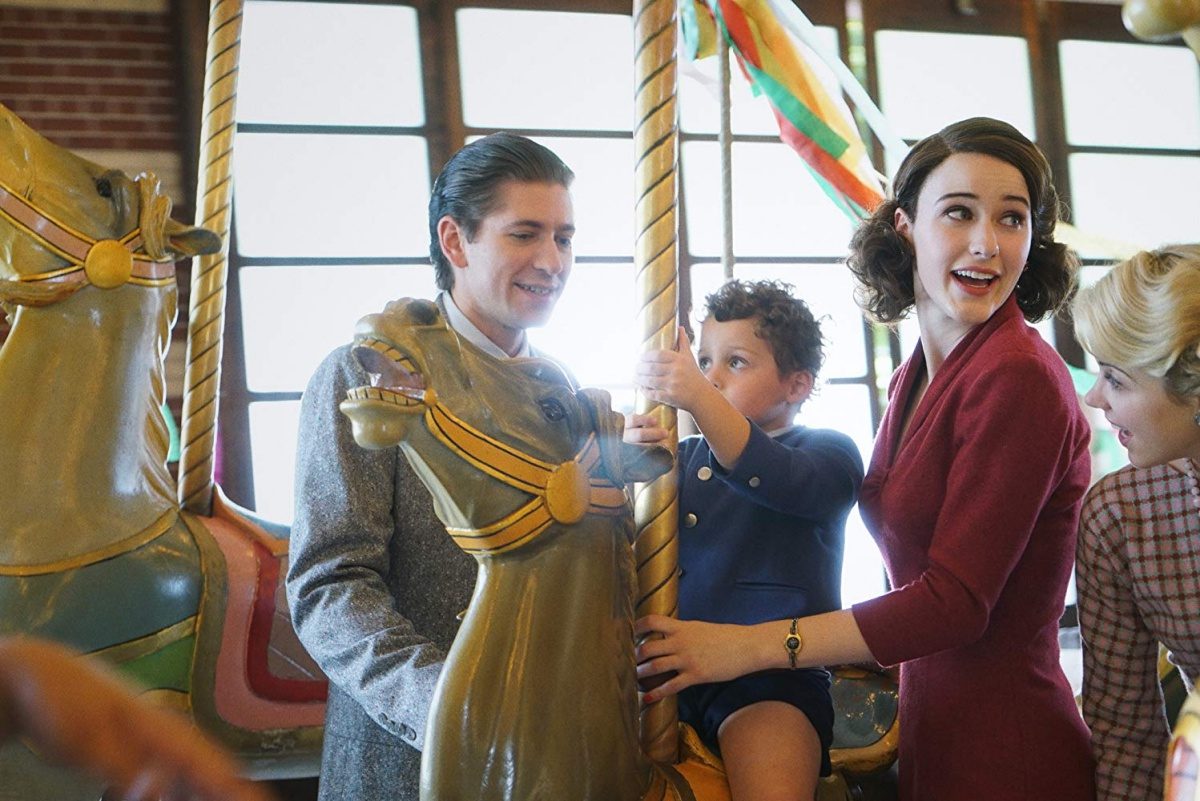 I deeply enjoy The Marvelous Mrs. Maisel in many ways, and I feel like Rachel Brosnahan knocks it out of the park as Midge, but that doesn’t mean the show is above criticism when it comes to class, race, and the fact that many of the leads in this very Jewish series aren’t Jewish. But one of the most controversial criticisms surrounds Midge’s motherhood in the show, which got a lot more attention in season two:

“Brosnahan told The Hollywood Reporter that Midge’s lack of focus on her two children is often criticized as ‘lazy writing’ or a ‘plot hole.’ The actress said there’s a double standard for female and male characters that should be corrected.

“’It’s been eye-opening and frustrating that that has been one of the primary criticisms of this character and of the show,’ Brosnahan said on Friday, referring to a Twitter conversation last month. She compared Midge’s ambition to that of Mad Men’s Don Draper or Breaking Bad’s Walter White, yet their hands-off parenting style is simply a ‘character flaw.’

“’I don’t think she’s winning parent of the year, but this hasn’t been a conversation about many male characters who are the centers of their shows, who are also parents,’ she told THR.”

While I understand the crux of this argument, that motherhood and being a “good mother” is held to a higher standard than being a “bad father,” I feel like this comparison between Midge Maisel, Don Draper, and Walter White (so much damn alliteration) is a flawed one because in the case of the latter two; them being bad parents absolutely plays a role in their children’s upbringing, the lives of their spouses, and is acknowledged within the plots of their shows as part of illustrating how damaged and broken they are as people that they fail to connect and care about their kids in a real, lasting way. Mad Men very much pairs Don’s mistakes as a father with how Sally grows up and defines herself, and how her lack of parenting leads her to care for herself in problematic ways.

The Marvelous Mrs. Maisel isn’t concerned with that. Midge’s kids are accessories in a lifestyle that she was expected to have as she goes forth into a new one, and that is a great story in its own. Some women aren’t meant to be mothers, some women are bad/negligent mothers, and by the way, Midge and Midge’s family talks about her children it show that they aren’t exactly good at this whole upbringing thing, which isn’t what the story is about. It’s a comedy series, and the kids are kind of like a really stylish lamp. They exist to show value and lifestyle, but little more.

What would be valid is asking why people are focused on Midge’s motherhood but not Joel’s lack of fatherhood, or if she invoked her television sisters in messy motherhood, Betty Draper and Skyler White. Betty would be Midge’s contemporary in upbringing and values, which is why they both share some of the distant childrearing techniques, and both Skyler and Betty were held to higher standards than their admittedly more childish husbands.

More so, I don’t think Midge being a bad parent or an absent one is treated like a “character flaw.” It’s treated as a non-issue because she has the class background to not have to be a hands-on mother. Zelda takes care of most of the childrearing, since Rose and Abe do not at all seem like very good caregivers beyond traditional values and a great sense of fashion. It is that discussion of class, not necessarily the lack of mothering, inherently that makes looking at Midge interesting.

Yes, Mrs. Maisel is “about a complex, driven, curious, flawed woman, who is at the center of her own story, who is trying to change her own narrative,” but it should not be forgotten that Midge is wealthy and her mobility of motion, ability to have easy daycare, and freedom to drop everything to go to Paris on a whim, or go on tour and leave her kids behind for six months, is because she is wealthy.

Alex Borstein, who plays Susie, defended the show from criticism, saying, “I leave my children to come shoot on this show, and it doesn’t mean I am a shitty mother. It doesn’t mean I’m neglectful,” and according to THR, reminded everyone that the show is a comedy, not about being a mother.

Still, I think it’s disingenuous to put Midge in the category of a “working mother” as if that’s just a catchall, because motherhood is work, and of course, there is no one way to be a “good mother.” However, Midge isn’t working to put food on the table; she’s doing it for the most idyllic reason of all: to pursue her dreams and her calling, and for most mothers, there is a lot of guilt in that, especially when they are single mothers and working to put food on the table. Many women have felt the harsh pressure of being pulled between their dreams and their children.

It’s not an easy story to tell, and if Mrs. Maisel doesn’t want that to be their story, then that’s cool; it doesn’t have to be, but it’s still valid to be thoughtfully critical of the privilege evident in the story, because it doesn’t make the show any less enjoyable. Mrs. Maisel is a fun, compelling, goofy ball of a show, and I’m glad it exists. Just because it’s not perfect doesn’t make that untrue.