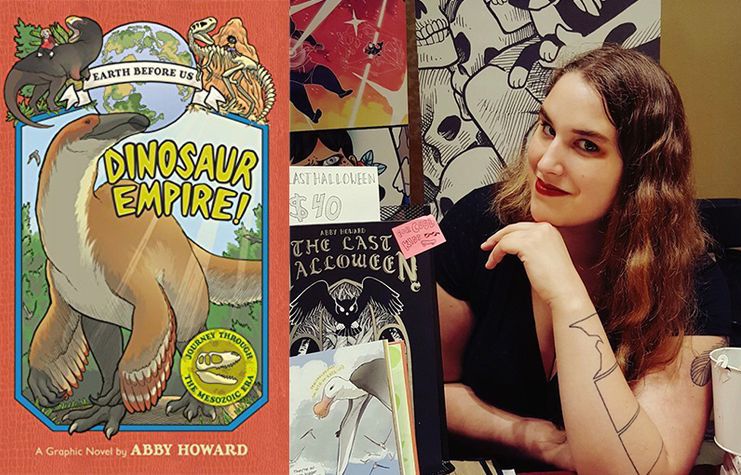 While Abby Howard hasn’t traveled through time like the stars of her new graphic novel, Dinosaur Empire!, that’s not to say she hasn’t had a few adventures herself. After starting her popular (and hilariously quirky) webcomic, Junior Scientist Power Hour, she came thisclose to winning Strip Search, Penny Arcade’s online reality competition for upcoming artists. As runner up, she was able to pursue cartooning full-time and create the horror comic, The Last Halloween. But with an education in evolutionary biology (she even went on a dino dig!), she couldn’t stop thinking about the weird creatures that came before her…

Enter Dinosaur Empire!, Abby’s graphic novel debut and the first installment in her The Earth Before Us series. It follows the prehistoric adventures of fifth-grader Ronnie and her know-it-all neighbor, Miss Lernin. After Ronnie fails a test about the history of dinosaurs, the pair travel back in time, where Miss Lernin uses her paleontology expertise to teach Ronnie about the wonderfully zany creatures of the Mesozoic Era. Like all of Abby’s work, it’s funny, gorgeously illustrated, and will likely blow your mind.

When The Portalist spoke with Abby at New York Comic Con, we talked about her new book, her awesome research discoveries, and how dinosaurs are so much more than monsters who kill things.

Before we get into The Earth Before Us, tell me a little bit about how you got into comics and when that happened. Did I read that you got your first comic job at 13?

Yeah. I mean, that one sort of counts because it was a friend of my mom’s.

I was published in a magazine—a monthly comic. I got one piece of fan mail and what it said was, “Hey, you should hire a different artist.” They didn’t know I was 13. But I was always interested in comics. It just seemed like a really great way to tell a story. It’s kind of like having a conversation with someone. You can really include all the facial expressions and the inclinations of your voice in the way that you like.

And you also went to school for paleontology? How did that educational experience help you with The Earth Before Us?

It just gave me a really great foundation of knowledge. And also knowing how to research things, and what to trust. That was really useful and really sparked my interest in stuff like dinosaurs and ancient beasts. I really like animals. I always have. I was always split between biology and art—not that it needs to be a split. They kind of feed into each other quite a bit. But when I went to school, I decided to pursue something that would actually give me a career—so science it is. Turns out that’s not quite true.

During university I was on a television show [Strip Search]. It definitely is the reason why I have a career today. I mean, I might have done it otherwise, but it was going to be a real struggle, trying to finish school and doing comics at the same time. So having that and being able to say, “Don’t worry. You can just do comics now, and people will pay you for it,” was extremely nice.

Did you go on an actual dinosaur dig?

I did, yeah. I went to school for evolutionary biology. It wasn’t quite paleontology, but I went to Saskatchewan to dig up dinosaurs, and it was amazing.

RELATED: Wanted: One Paleontologist, Willing to Travel Through Time

Someone told me that there were once giant grasshoppers in Saskatchewan? I Googled it, and I can’t tell if the [the grasshoppers] were photoshopped in, or if they really existed once upon a time…

You might be thinking of the weta. That’s a cricket-ish looking thing, and it’s huge. That’s one of the biggest grasshopper-ish things we have now…But [the size you’re suggesting] would be impossible because the largest insect that ever lived only had a wingspan of two feet. 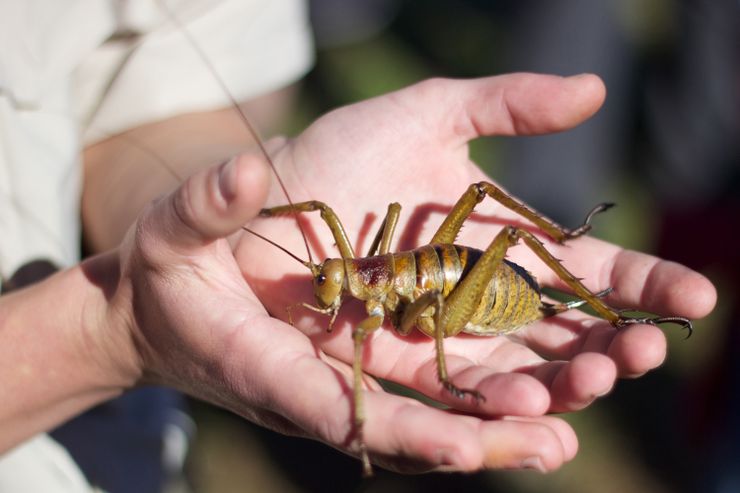 So after you went on that dig, is that where The Earth Before Us developed? Or how did you start writing this story and get it to where it is today?

I started writing [Dinosaur Empire!] because I was desperate to put all of this information out there. I kept having these conversations with people over and over where I was just like, “Here’s the lowdown on this thing,” and I just couldn’t keep it in. So I had to let it out; I had to write this book. Then I could just be like, “Here, look. Here’s all the stuff you need to know.”

What’s your process like? Do you write the story first, then draw? Or is it kind of concurrent?

I write the story first, and then I draw. But it’s a little fluid because sometimes when I’ve laid out a page, then the script won’t work. Then I have to tweak it—that happened a lot with the next book [in The Earth Before Us series]. I wound up mostly rewriting as I went. But I do have the basic story structure all lined out first. 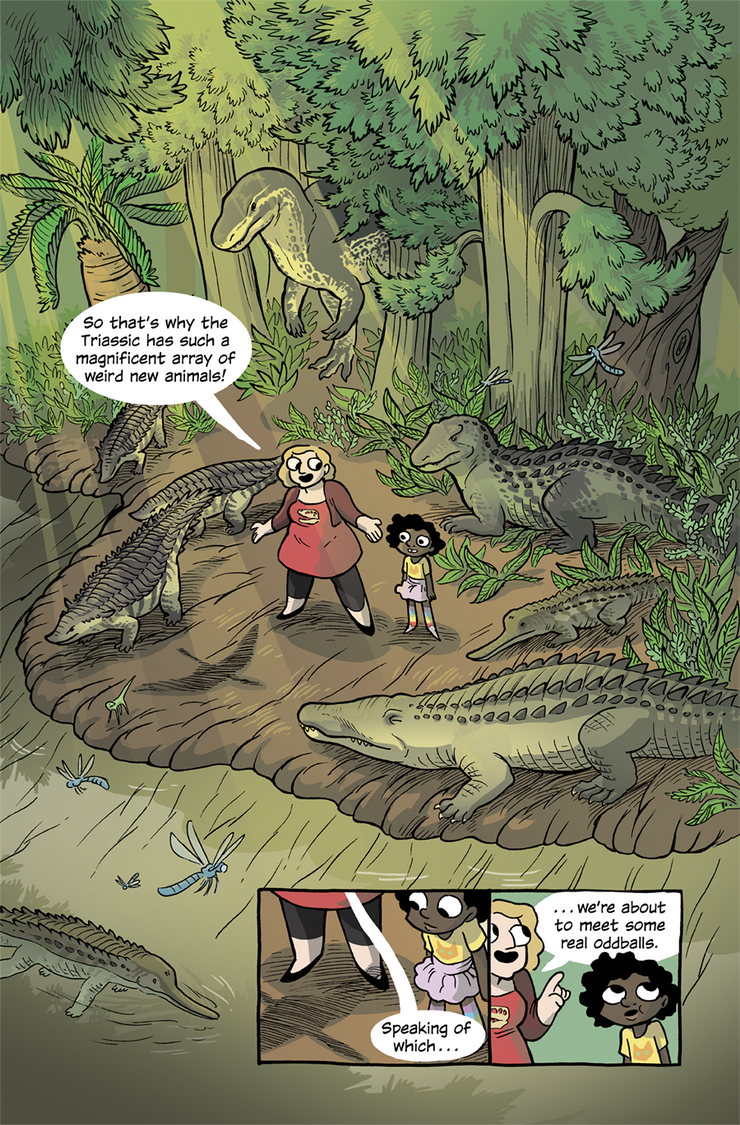 After traveling back in time, Miss Lernin teaches Ronnie all about the creatures of the Mesozoic.Photo Credit: @AbbyHoward

Did you base [Dinosaur Empire!] on anything? I wondered if Ronnie was you as a kid.

Miss Lernin…She’s totally not based on me at all…

If you’ve seen my comic, Junior Scientist Power Hour, that’s my little persona. Yeah, so [Miss Lernin] is me. I wanted to draw myself next to dinosaurs, so that’s where that came from. Then I was like “I need someone to talk to.” I can’t just be ranting about dinosaurs without an audience, so then I came up with a child to help teach things to.

Did you find it difficult to translate your information into something that children might understand?

Yes. It’s the most difficult part…Sometimes I’m like, “This is boring. What am I doing?” That’s where it’s important to have comics. But there can be very exciting facts. Most of the time…there’s an interesting tidbit that you can share.

What was your favorite interesting tidbit? Did you discover anything that made you go, “Holy crap?”

Well, probably one of my favorite [facts], which I already knew before doing the research for this project, was how many things might have had feathers.

Like…how many? A lot?

Possibly. Of course, we aren’t really sure because we don’t have definitive proof, but we do have Kulindadromeus. A [Kulindadromeus] is big, and it’s an Ornithischian—which we thought didn’t have feathers. We thought the only things that had feathers were Saurischian, which are the other kind of dinosaurs and mostly just Theropods. So knowing that an Ornithischian like a Kulindadromeus, which is a totally different branch of dinosaurs, had feathers, it’s just like, “Oh, shit!”

The kulindadromeus may have had feathers… Photo Credit: Wikipedia

It’s really easy to ‘turn on and off’ feathers; we do it all the time. We have pigeons, domesticated pigeons, and if they have those fluffy feet that’s because we just turned the switch in their genes…Not by hand, but by breeding. Those scales on their legs can turn into feathers.

Wow. So there could’ve been a massive dinosaur with feathers?

Maybe, maybe not. The problem there is overheating, so that’s why T-rexes are pretty iffy; they’re big. We have a few skin impressions from different parts of the [T-rex] body, but they’re so small, so it’s like, “Oh, did the feathers fall out? Did it also have feathers on top of those? Did it only have feathers on one part, like some kind of cool decoration?” We don’t know so we might as well have fun with it. 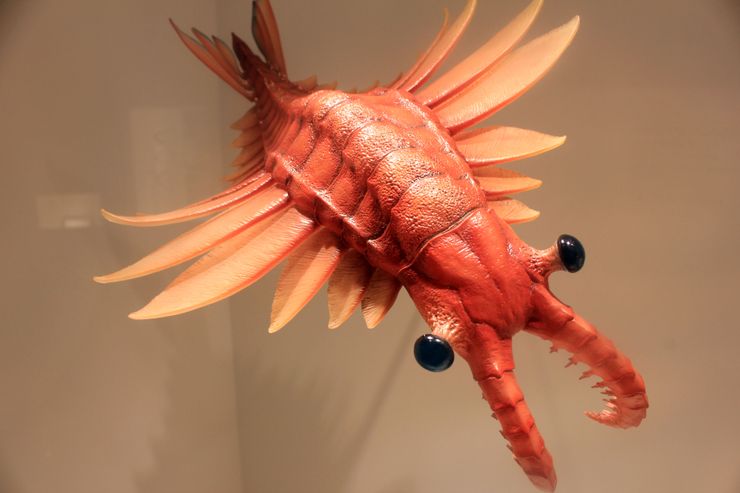 What’s next for the [Earth Before Us] series?

[The next book] is the Paleozoic era. That’s the time before the Mesozoic so it’s all the weird stuff that happened before the dinosaurs and the dawn of animal life…There are a lot of animals where it’s just like, “Okay what is this?” And there are some animals where all we have is one or two parts, and we’re like, “I don’t know how these work. I don’t understand this animal.” There’s one that’s just like…a taco with eyes.

And there is also the Anomalocaris, which was huge for the time and is actually pretty impressive. It’s got big googly eyes—a lot of things in that time had big googly eyes. They hadn’t figured out eyes quite yet…Then we move on to fish.

I bet there are some wacky fish.

There are some wacky fish. Like Dunkleosteus…It’s a very big fish, and it’s got all this armor plating…

The Dunkleosteus: “It’s a very big fish, and it’s got all this armor plating.” Photo Credit: Wikimedia Commons

It actually evolved from crushing plates that were on the outside of their body. So the entire body of the fish is covered in these bony plates which are actually the same stuff that our teeth are made out of. Our teeth are the one part we kept.

You’re teaching me so much today! I’m going to go home to all my friends and be like, “Listen, people. There was a species that was basically a taco with eyes.”

And then from there we move on to the fish that crawled out of the water, and then the weird relatives of ours. Did you know Dimetrodon—the weird little one with the sailed back and is low to the ground—that’s a relative of ours. It’s not a dinosaur.

Yes, it is the highest of compliments. And I mean honestly, it is a book for children, but it’s interesting, it’s funny—the drawings are obviously fantastic [laughs]—so an adult can easily enjoy it as well. And it doesn’t talk down to people. That was something I really wanted to make sure I didn’t do, to assume people wouldn’t be able to understand something and just skip it.

How does it feel to know that you are influencing young kids, especially girls, who are maybe not encouraged to pursue their interest in science?

It feels like I really did something, It’s really amazing. I’m so happy. So many dinosaurs are just marketed to boys as cool monsters that kill people and eat things. Which of course can only be for boys and not for girls…So it’s just really nice to have been like, “Hey, they’re just animals,” for one thing, and also make it something that people can use in the classroom. It’s basically a textbook, but more fun.

I’m very happy I’ve put this in the world.