A Tiny Particle May Mean Rewriting Our Understanding Of the Universe 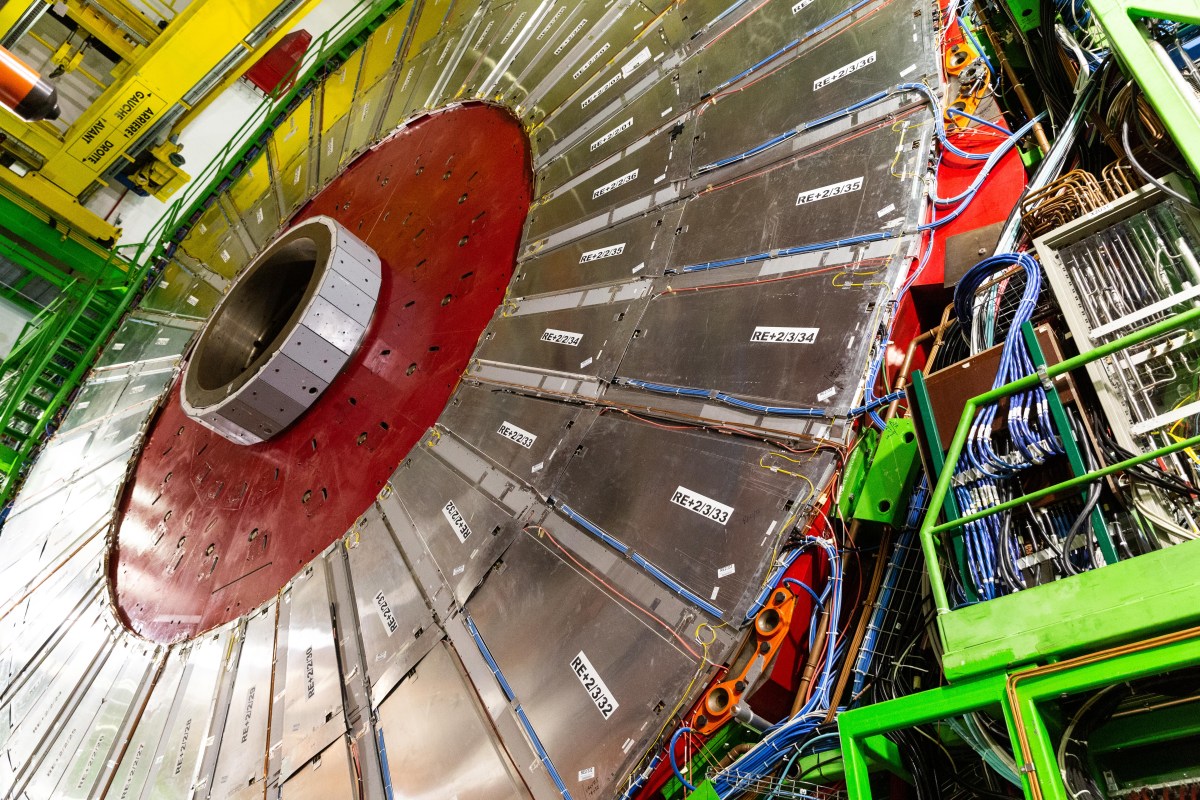 Quantum physics was described by Stephen Hawking as “the dreams that stuff is made of“and the more we learn about the quantum universe, the less it seems that we know. Just look at the latest news from the Fermi National Accelerator Laboratory, or Fermilab, in Batavia, Ill:  A particle called a muon disobeys the laws of physics in such a way that scientists have come to the conclusion that forces beyond our knowledge and comprehension are working on it.

Basically, Fermilab was part of an experiment that observed particles created by atoms moving at super speeds around a magnetic race track, like the one pictured above at CERN. These high-speed collisions made muons and these “fat electrons” defy the rules of physics, which Fermilab confirmed. The subatomic particle acts so weirdly that physicists are throwing up their hands and saying “guess we know nothing” and I love that. Seriously, here’s what the New York Times said:

The best explanation, physicists say, is that the muon is being influenced by forms of matter and energy that are not yet known to science, but which may nevertheless affect the nature and evolution of the universe. The new work, they said, could eventually lead to a breakthrough in our understanding of the universe more dramatic than the heralded discovery in 2012 of the Higgs boson, a particle that imbues other particles with mass.

So, let’s talk about the Muon, which like all subatomic particles sounds like (or in the case of the Quark, is) a Star Trek character. These little dudes are kind of like electrons but way heavier and when subjected to very high magnetic fields at Fermilab, they wobbled in a way that made no sense and didn’t match with calculations.

This new research on muons doesn’t just come from Fermilab but from an international collaboration of 35 labs and several countries, all working together on an experiment called Muon g-2, which resulted in the publication of many papers. And it’s a big deal in the science community because all of this helps physicists better answer the question of “why is stuff …. stuff at all.” And yes, I’m simplifying a lot but what makes up the universe and why it behaves the way it does, and how we predict it, is the core question of physics.

Particle Physicists use what’s called the “Standard Model” equation to determine and explain why particles behave the way they do and have properties like mass, and spin, and charge. It’s really complicated, but the important thing here is that the muon doesn’t match those rules. “The deviation of the muon’s behavior from the Standard Model expectation is truly intriguing, and we hope that more data and improved theoretical calculations will confirm that the cause is new physics,” Fabiola Gianotti, the director-general of CERN, told the Times.

How is this possible and what does it mean?  We don’t know! But quantum physics is all about trying to understand how the stuff we don’t understand influences the stuff we can study and observe because the entire field is about the weirdness of particles not behaving as we’d expect them to and the implications of that.

Take for instance the famous idea of Schrödinger’s cat. The thought experiment (meaning it’s just imaginary and no cats were ever harmed in the production of this theory) relies on the phenomena that certain quantum particles don’t necessarily have certain properties until they are observed. Like spin: we talked about that earlier but in some cases, some quantum particles always spin in the direction the observer is trying to measure … even if it’s the same particle. Measure for left spin, you get left spin, measure for right spin you get right.

So what if you rig a device that poisons a cat in a box based on the spin of a particle but you don’t look at the instrument so the particle is not being observed by a person … is the cat both alive and dead? It’s wild and muons seem to make this wilder, because for some really complicated reasons they behave in weird ways that hint at other forces working on them we can’t even see, and they break the model. Dig into this and we get into brain-melting quantum physics stuff about how matter doesn’t exist but rather has a tendency to exist and how there’s no such thing as empty space just potential particles and go in and out of existence.

Confirming that the muon doesn’t follow the standard model means there’s a lot out there that we just don’t know about and that there are either laws of physics that we have not learned yet or that the laws we do know can be broken. It’s fascinating stuff and it reminds us that what we don’t know about the universe will always be more than what we do know. And that’s cool.