A Möbius Strip Made of DNA 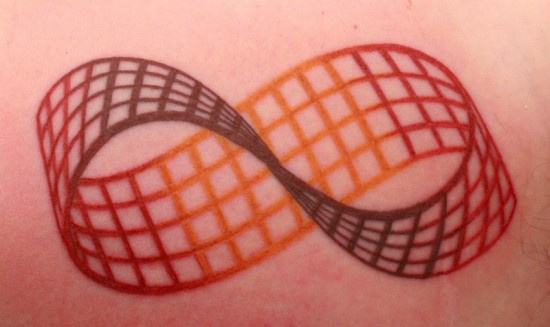 Scientists at Arizona State University have created Möbius strips… using DNA.  Because that’s awesome, and for no other reason.

Actually, they did it as a test and demonstration of DNA self assembly; “not only because it is artistically inspiring, but also because it will likely display unique material properties that may be applied to create novel molecular devices.”

The researchers even included “specific cutting sites” in the DNA used to make the helices, so that they could transform themselves into other shapes.

When this DNA Möbius strip is cut down the middle, it generates a loop half as narrow and twice as long as the original, with four half turns (a twist of 720o) around its middle axis. It is no longer a Möbius strip, as it now has two distinct surfaces and edges. By cutting along the length approximately one third of the way into the width, they created a catenene, otherwise known as two interlocking loops. They note that the only other way to connect two loops of DNA requires cutting one of them into a line, stringing it through the other, and then reconnecting its ends.

And we used to make ours with paper and tape.

The full scientific article can be found here (behind a paywall).