Your Favorite ’80s Tropes as Seen in Oh My Goddess! 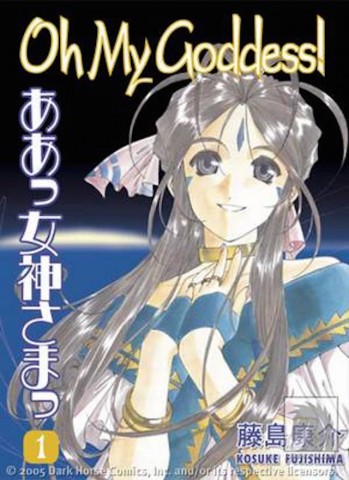 Reading Kosuke Fujishima’s classic manga rom-com Oh My Goddess! reminds me of watching one of my (many) favorite ’80s or early ’90s movies. To be specific, it reminds me of rewatching them now, as a 30-something.

First, there’s that familiar sense of wistful nostalgia. Oh, to be back in the simple days of big hair, shoulder pads, and scrunchies. Then, there’s an acute sense of embarrassment and discomfort as I look through those innocent dreams, and watch painful stereotypes play out. The media of my youth, stripped now of its trappings, awkward growing pains bare for all to see.

Oh My Goddess!, or Aa! Megamisama, began serialization in 1988 in Afternoon, a Japanese monthly magazine. And then it ran. And ran. And continued running, all the way through April of 2014. It’s the longest-running manga series in English. I was in kindergarten when the first issue was published. During the time it was current, people had time to grow up and have kids of their own. Holy—well, goddess!

Oh My Goddess! is the story of college student Keiichi Morisato’s love life. One evening, he dials a wrong number and ends up on the “Goddess Technical Help Line.” The next thing he knows, there’s a goddess in his dorm room. The goddess, Belldandy, hands him her business card and calmly states that she will grant him just one wish. Keiichi, who considers himself too short to have any sort of luck with women, wishes for a goddess like Belldandy to be with him always. Immediately after the words leave his lips, magical lightning strikes Belldandy, and she discovers that the Almighty has granted Keiichi’s wish. She’s stuck nearby him for good—and there are no women allowed in his dorm room! Once Keiichi and Belldandy find a place to live that suits a college student’s budget and allows women, the story is off and running.

Dark Horse has been publishing Oh My Goddess! in collected volumes since 1994, and later this month they’re releasing the first omnibus volume. Over 550 pages of boy-meets-girl awkwardness, college humor, and general hijinks. So, you know what that means? It’s time to revisit the ’80s! Let’s take a look at some of those tropes, shall we? 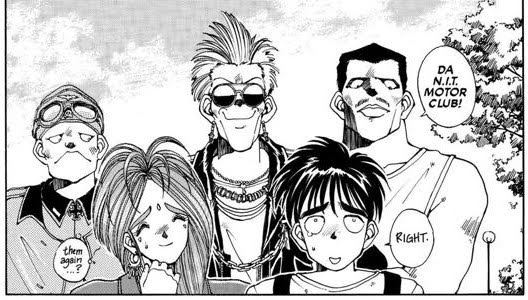 Keiichi and his Motor Club crew of greasy social outcasts drool over specific makes and models of motorcycles. And, of course, when Belldandy arrives, they also drool over her, especially when she rides a motorcycle in a competition to become Campus Queen. And when she wears a jumpsuit. What’s great, though, is that Belldandy can hold her own with mechanical things. Okay, yes, she may use her powers at times, but she can understand and fix a motorcycle on her own, and she’s not forbidden from entering a stereotypically male space. 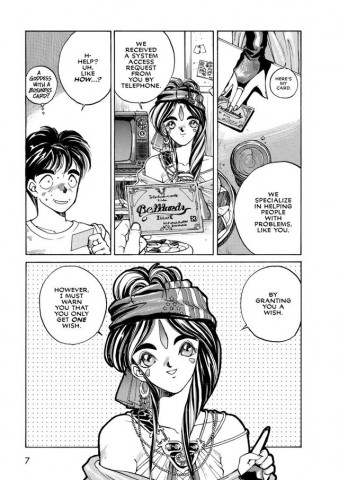 In the 1985, “Weird Science” taught us that computers not only augment our reality, but they can change it, too. In fact, they can create life! Hot, bodacious babes, to be exact. Hot, bodacious babes who can do magic-that’s-also-technology in order to boost the self-esteem of nerdy, unpopular guys. Wait a minute…

The universe of Oh My Goddess! is roughly based on Norse mythology with an added ’80s-riffic technological twist. Belldandy and her sisters, Urd and Skuld, are based on the Norns: Urd, Verdandi, and Skuld. Belldandy is a goddess by both nature and job, and her magic often uses code. “I’m going to cast the spell with Yggdrasil-code speech,” she says to Keiichi. “It may sound a little harsh to you … Just think of it as a very high-level computer language.” Urd explains that Yggdrasil (the world tree of Norse myth) is their heavenly computer, and goes on to say, “…my body is a remote terminal to Yggdrasil … the link is repaired, Bell’s system force is recharged—problem solved. In programming, we refer to this as input/output.”

So you see, computers really do underpin our entire existence!

The Bigger the Hair, the Better 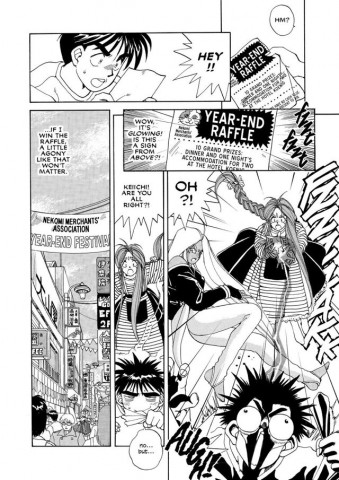 If there’s one thing most people associate with the ’80s, it’s big hair. Some of my favorite rad curls are seen on Chris Parker (Elisabeth Shue) of “Adventures in Babysitting,” but throw a stone at any ’80s media and you’ll hit some(one) with amazingly airy locks.

Oh My Goddess! does not disappoint in the hair department. Keiichi’s Motor Club friend Otaki sports a rockin’ upright ‘do, the stature of which I can only assume is maintained with motor oil. My favorite minor character, the third-class earth spirit, models a beautiful shock of Bowie-esque hair.

Belldandy has a fantastically flowing mane that envelops her spectacularly when she’s casting magic—which she does a lot, most often to save Keiichi in one way or another. She’s far from a damsel in distress, even if she does tend to fall asleep abruptly when she runs out of power.

If you’ve missed shoulder pads, mini skirts, overalls, loose shirts with tight-waisted pants, and other ’80s fashion classics such as those seen in “Heathers,” you can get your fill in Oh My Goddess! Believe you me, Belldandy totally rocks the mini skirt and shoulder pads look, and Daniel from “The Karate Kid” has nothing on Keiichi’s relaxed, suspender-laden style. Urd is killer in her deliberately sexy, thigh-baring dresses and swimsuits with big, blocky patterns.

Honestly, the fashion in Oh My Goddess! is half the fun. While each character clearly has his or her own style, none of the major characters appear in the same outfit all of time, and in fact outfits are rarely repeated at all. Fujishima clearly has an eye for style!

I’m not going to sugarcoat it: Oh My Goddess! suffers from the adoption of a number of sexist, racist, and transphobic stereotypes in the name of humor. There are also far too many boob grabs and deliberately framed female body parts. While there are many things I enjoy about the manga, I did not find it a comfortable read overall. Alas, a not-unfamiliar sensation I have felt many times when reviewing beloved ’80s media; one might say such discomfort is an ’80s trope in and of itself.

Let me end, however, on something I was initially very suspicious of, but came to dubiously appreciate: Keiichi and Belldandy’s relationship. Does Keiichi spend a good portion of the first omnibus trying to figure out how to “get some” like seemingly every other male in ’80s media? Yes he does. No bones about it (or, er, you can make that into an inappropriate pun on your own), Oh My Goddess! is most certainly a magical girl wish-fulfillment fantasy, as Annalee Newitz points out. It’s also a romantic comedy, equal emphasis on both “romantic” and “comedy.”

However, is Belldandy subservient to Keiichi’s wishes? I thought so at first, but over the course of the omnibus I revised my opinion. She clearly adores Keiichi, but she makes her own choices and decisions—aside from the fact that she must stay with him always, although there are signs that wish is losing its power. Importantly, in addition to saving Keiichi, Belldandy can also save herself without Keiichi’s intervention, as she demonstrates when she puts an attempted rapist in his place after he pushes her down on a bed. At the end of the first omnibus volume, Belldandy and Keiichi work together to win a tough contest on behalf of the Motor Club. Both of them approach their relationship as equals, and in spite of Urd’s pushing and the wish-fulfillment circumstances, they enter into the relationship at their own pace. That’s nice.

Does Belldandy need Keiichi? No. Does she want him? Apparently she does. And that, for me, will do.

Amanda M. Vail is a writer, editor, and consumer of as many comics as possible. In addition to running her business, Three Wrens, she’s a staff writer for Women Write About Comics. Follow her musings on Twitter @amandamvail.