8 Times Futurama Dropped the Ball on Gender | The Mary Sue

If you’re reading this, you probably already love Futurama, and for good reason. The show had tight humor and it was accessible to a wide viewership, but you could tell the writers were huge science fiction geeks and proud of it. There was, however, an inescapable issue the show had: addressing gender. There were some great character moments too—hell, there’s a reason why Leela’s outfit is one of the looks worn by The Mary Sue’s mascot—but gender identity is a subject where the writers often dropped the ball. So get ready to ride the Walrus and grab your Smizmar as we look at eight times Futurama puts its foot in its mouth in the gender conversation.

Speaking of Smizmars: what are they? The prominent role of the Smizmar is explained in “Kif Gets Knocked Up a Notch,” where Kif is accidentally impregnated by Leela. The Smizmar is vaguely defined as the Amphibosan word for people in a romantic relationship, much like one would call a wife or husband or partner. The word is mentioned earlier in the series alongside “ladies and gentlemen,” in season two’s “Raging Bender.” Maybe the writers were trying to think of a word for people who don’t fit into “ladies and gentlemen,” and figured this would get a laugh. But then in season seven’s “The Thief of Baghead,” a movie poster is seen with the title “When a Man Loves a Smizmar.” So what is a Smizmar, according to Futurama?

In “Amazon Women in the Mood,” we visit the planet of Amazonia and its people, the Amazonians. They are a race of large humanoid women who did away with male members of their race a long time ago. They’re neanderthal-like, but are still written to have the conditioned tropes of being a modern woman. As such, the only use for male life forms on their planet is for Snu-Snu (sex), which they use as punishment, against men’s will, and to their death. Yep. 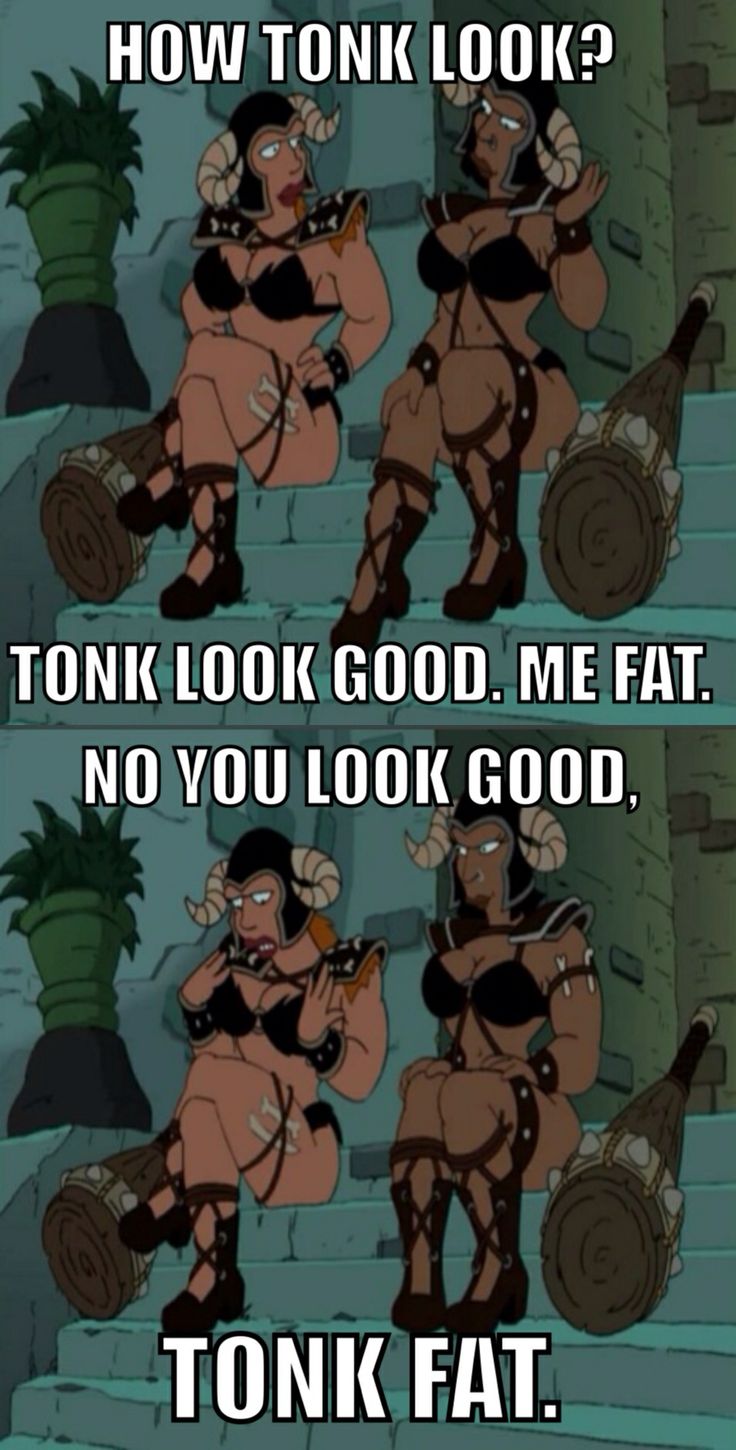 On the flipside, we have the Feministas from Into the Wild Green Yonder. Everything is pink, names for items are adorable, and all their protests stereotypically feminize items and people.

The Feministas also intentionally removed masculinity from words. There is precedence for this type of demasculinizing of words in feminist circles, but whether this was where the writers pulled their inspiration from or not, the joke has no clear structure. No set-up, no punchline, we hear it over and over, and it could’ve used a pay off in the end. All it implies is that high-femme aesthetics should be inherently funny (they’re not). Again, being femme is seen as being weak and worthy of ridicule in the episode “Raging Bender,” when Bender “The Offender” turns into the tutu-wearing, curly-haired, tickle wand-waving “Gender Bender.” The look could be a reference to pro wrestler Gorgeous George, but it lacks depth). This ties in with Leela’s conflict in that episode with a thrown-together masculine figure in authority who follows a rote “women aren’t as good as men” arc. At least she gets her revenge in the end by outsmarting her old instructor, but her girl-power triumph is countered by Bender’s feminine-cloaked downfall.

We see this trope in the show a lot: a male character makes a sexist comment but promptly gets whacked upside the head for it. Sure, the kneejerk feminist defense feels good because the person saying something awful gets instant retribution. But is it? The sexist joke is still made, and the defense allowed is aggression, as opposed to actually making the offender apologize or realize how his remark degrades women.

I’m not saying the show never had jokes that were supportive of women being quick-witted and quippy, or that slapstick humor isn’t allowed. But why is the only proper response to sexist comments an act of violence, and why are we laughing at a woman acting violently for a legitimate hurt that shortchanged her personhood? 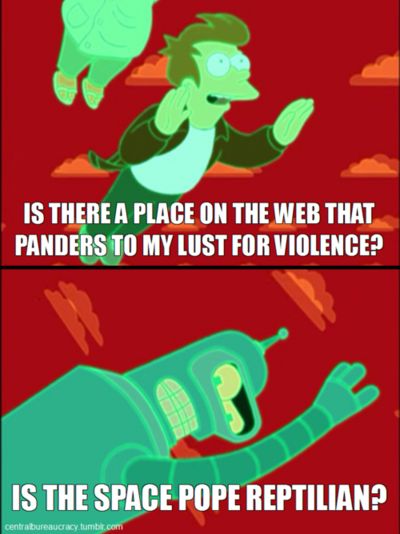 For such a minor character, Hermaphrobot accomplishes a lot—in very bad ways, even beyond her intersex slur-referencing name. This character was introduced as one “upgrade” away from being “more lady than [Bender] can handle” after Bender violates her privacy by covertly scanning her. Obviously trans and intersex folks deal with a lot of the same stereotypes, as this case shows, but either way, it’s sad to see their physical attributes and changes being the defining traits for one of the only non-cisgender coded characters in Futurama.

This episode is the pinnacle of Futurama not giving a fuck anymore, as the writers constantly conflate gender (a social construct) with biology (genitalia). Most of the problems the characters have to deal with seem like they’ve been pulled from a generic relationship book (“Men are Omicron Percei 7, Women are from Omicron Percei 9”?). Tired old heteronormative sitcom tropes trample over one another, like when the characters can’t have sex suddenly they can coexist peacefully. And that’s just the tip of the iceberg with this episode.

While most people remember the obvious transmisogyny of this episode, we should also remember that the entire reason Bender is “made a woman” by the Professor is steeped in some eyebrow-raising gendered arguments. Bender, while watching a man-bot athlete bend a girder in the Olympics, decides he could never compete at that level but that he could wipe the floor in the fem-bot competition. Then he does, because trained female athletes are still not as talented as your average beer-drinking, couch potato schlubs!

After winning five gold medals for the country of Robonia, Bender needs to be subjected to a gender confirmation test. The women feel that Bender getting a robotic “sex change” is an insult, and Fry says “I can’t watch this ‘cause it’s creepy and wrong and sick. However, I will watch out of curiosity.”

Bender is doing it as a con, for non-transgender reasons, but we don’t have enough positive trans representation to look at and say “Oh yeah, well, clearly this is situational.” It also furthers the narrative that trans women, by nature, are deceptive—not to mention all the deeply hurtful language and imagery surrounding Bender’s physical transition process.

Maybe if Futurama had lasted another few seasons they would have addressed some of these issues. Maybe not. For what it’s worth, Futurama was one of the best shows to lampoon and celebrate the world of science fiction—which is why we have to be critical of it. It was incredibly well executed and memorable, but saying that it was perfect would be a disservice to the show; if sci-fi teaches us anything, it’s that we should continue to question everything. Futurama—and gender—are no different.

Ashley Lauren Rogers is a playwright whose new show Falsehood, Fallacies, and Fairytales premieres in NYC December 7th with Step1 Theatre Project. Her one-person show PASS/FAIL received its premiere at Dixon Place Lounge NYC, was performed for The Midtown International Theatre Festival, and was part of the Trans Theatre Festival at The Brick in Brooklyn.  Ashley received the 2014 ACM Award for Comedy Video for the pilot of Marisa and Rocco through Dogtoon Media. Ashley has written for Cosmopolitan, SFWA, John Scalzi’s blog, and has been a vlogger/blogger for NerdCaliber.com. Ashley is also the producer/creator of the Is It Transphobic? podcast.