Our 8 Favorite Cards From Magic: The Gathering’s “Ravnica Allegiance” Expansion

In addition to attending my first Magic: The Gathering pre-release, this new Ravnica Allegiance set is one of the first Magic sets I have gotten to enjoy that experience with, so it holds a special place in my heart.

As I was going through the cards I bought—along with the ones sent our way by Magic creators Wizards of the Coast—figuring which ones would fit into my decks and which were just cool cards to save for a new commander set, I wanted to share some of the ones that caught my eye. I didn’t include Legendary Creatures simply because I’m biased, and they are they are my faves, so they would have been half the list.

I am very much a newbie and a casual player who mostly enjoys Commander and Morden, so I’m not coming in here as some master authority. There are lots of awesome Magic YouTube channels that have broken down the best cards in the set through years of experience as players. For me, as a baby Magic user who enjoys playing and just wants to have a good time with creatures who do cool things and crafting themed decks, here are the eight cards that really spoke to me as I was enjoying the set. 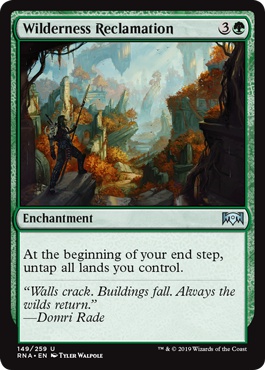 It’s not as powerful as Seedborn Muse, but it isn’t a creature, which means it won’t be destroyed by a creature board wipe, and since it’s uncommon, it’s a much less expensive. Plus, it still does the job of freeing up land for any instants you may need to counter spells.

7. Seraph of the Scales 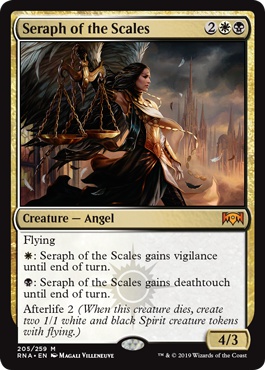 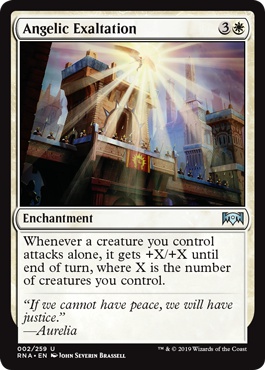 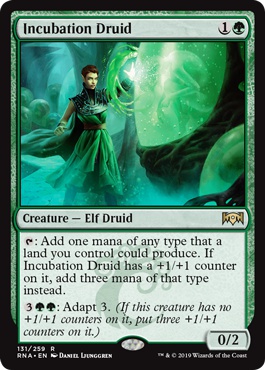 Card Name: Incubation Druid
Mana Cost: 1 Green
Converted Mana Cost: 2
Types: Creature — Elf Druid
Card Text: Tap: Add one mana of any type that a land you control could produce. If Incubation Druid has a +1/+1 counter on it, add three mana of that type instead.
3 Green/Green: Adapt 3. (If this creature has no +1/+1 counters on it, put three +1/+1 counters on it.)
Watermark: Simic
P/T: 0 / 2
Expansion: Ravnica Allegiance (Rare) Ravnica Allegiance
Rarity: Rare
Card Number: 131
Artist: Daniel Ljunggren 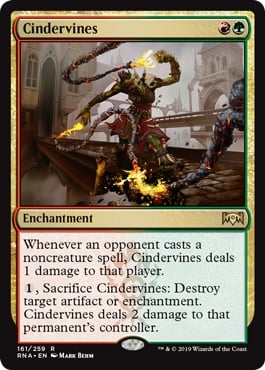 This is really good if you are playing against a mono-red or mono-blue deck. Most of those run spells and instants to zap you or scry, with Cindervines they can still play their reindeer games, but it’s gonna hurt.

3. Rhythm of the Wild 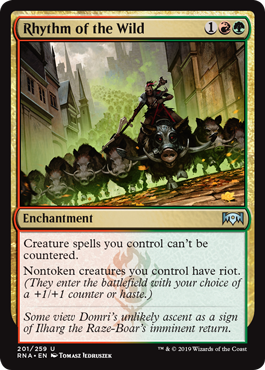 This is a must have for any Green player. It helps make your big creatures bigger and gets them on the board. 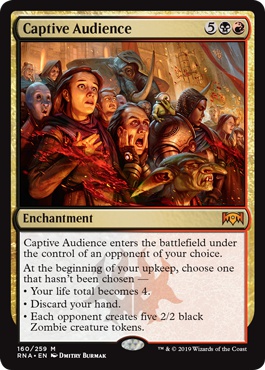 This is going to be the worst in Commander. 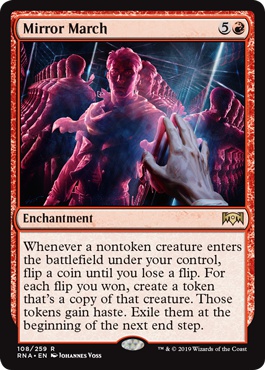 Card Name: Mirror March
Mana Cost: 5 Red
Converted Mana Cost: 6
Types: Enchantment
Card Text: Whenever a nontoken creature enters the battlefield under your control, flip a coin until you lose a flip. For each flip you won, create a token that’s a copy of that creature. Those tokens gain haste. Exile them at the beginning of the next end step.
Expansion: Ravnica Allegiance (Rare) Ravnica Allegiance
Rarity: Rare
Card Number: 108
Artist: Johannes Voss

Cards with coin flips are frustrating, but with Mirror March, if luck is on your side, it’ll give you a really good opportunity to create a solid board that you get to keep until the beginning of the next end step. It’s not as strong as Doubling Season, but it works well for an aggressive deck that won’t be token heavy.

What are some of your favorite cards from Raniva Allegiance? Let us know below!