Get Spoopy: 7 Comics to Get You in the Halloween, Er, Spirit 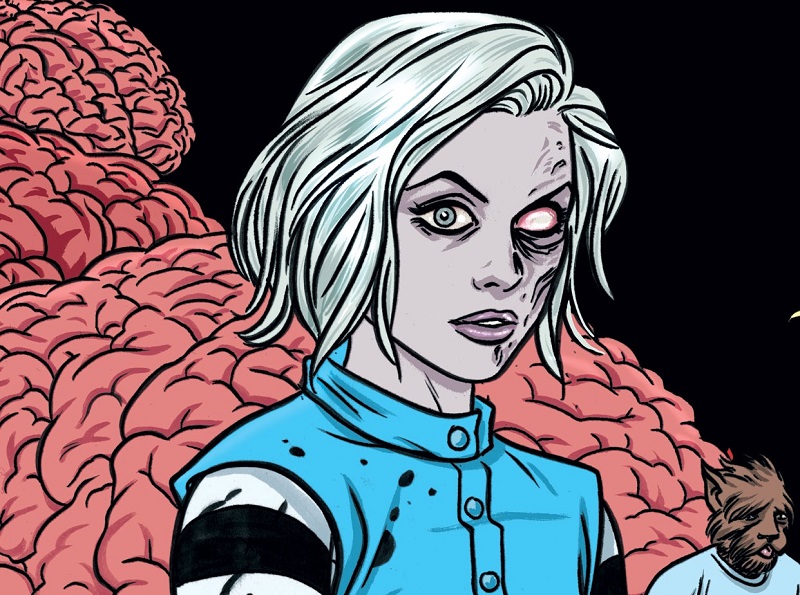 It’s Halloween time again and I couldn’t be happier. I’ve spent the month crisscrossing Salem, decorating my apartment, wrangling my begrudging black cat into a Halloween costume, and planning a Halloween party (costumes required). From October 1st-31st, I’ve got horror movies on my TV and a bowl of Halloween candy in my lap. But maybe you aren’t a super Halloween fan; maybe you’re feeling a little bit like a Halloween Scrooge this year. If you’re having trouble embracing the most wonderful time of the year, I’ve got some spooky comics that will help you find your Halloween spirit.

Tales from the Darkside
In 2015, Joe Hill (Locke & Key) scripted a reboot of George A. Romero’s horror anthology show, Tales from the Darkside. Even though it wasn’t picked up, the stories aren’t going to waste. Released as a four issue miniseries that just wrapped up, the books are made up of different Twilight Zone-esque tales. Hill’s work with Gabriel Rodriguez will be a Halloween treat for Locke & Key fans, or for anyone who loves horror anthologies. And while this was only launched as a four issue miniseries, the door seems wide open for IDW to expand Hill’s twisted little universe into a fully launched ongoing series.

House of Penance
Read. This. Now. Possibly the weirdest, trippiest comic of the year, this six issue series centers around the true story of the Winchester Mystery House in San Jose, CA. After her husband’s death in 1881, Sarah Winchester inherited $20.5 million dollars from the Winchester Repeating Arms company. The story goes that after the deaths of her husband and her infant daughter, Winchester went to a medium who instructed her to travel west and continuously build a home for herself to house the spirits of people who had been killed by Winchester rifles. Construction began in 1884 and continued until her death in 1922. A never ending labyrinth of rooms, there are areas of the house that are still being discovered today. House of Penance captures the eeriness of the Winchester story, with artwork that feels like it is ready to creep and crawl off the page.

Nailbiter
Who doesn’t love a weirdly fun serial killer tale? This ongoing series was launched in 2014, and centers around the town of Buckaroo, which is famous for producing an abundance of serial killers. The titular character is the Nailbiter, a reformed serial killer who (you guessed it) has a sweet spot for chewing on his victims’ nails. And then there’s The Blonde, the Clown Car Killer, The Terrible Twos, and the rest of the Buckaroo Butchers. When the FBI comes to investigate, it’s time to try and reveal the dark secrets that make Buckaroo serial killer central.

Trick ‘r Treat: Days of the Dead
The movie Trick ‘r Treat is one of my annual watches for the Halloween season, and fans of the cult hit have been waiting years for a sequel. But last year, creator Michael Dougherty released the graphic novel Trick ‘r Treat: Days of the Dead to try and hold fans over. The book contains four Halloween stories from different time periods, and features artwork from some of the best artists in comics today (including the great Fiona Staples of Saga fame). Hopefully Dougherty will continue to release these anthology books and bring us the sequel that Trick ‘r Treat fans have been waiting for!

Paper Girls
If you, like me, are missing Stranger Things and would like something to hold you over until season 2 next year, it’s time to start reading Paper Girls by Brian K. Vaughan and Cliff Chiang. The series kicks off after Halloween of 1988, when four 12-year-old girls are out delivering papers and encounter some strange events that leave them (and the reader) trying to figure out just what is happening. At different points in the first few issues, signs point to time travelers or aliens or a 1980s War of the Worlds. Just like Stranger Things, the mysteries in Paper Girls will be revealed bit by bit.

iZombie
This series came out a few years back, but if you’re a fan of the TV show, this might be a good time to check out the source material. This is a great choice if you’re looking for something a little less dark and a little funnier than the other comics on this list. In the comic, Gwen is a zombie who works as a gravedigger (for the free food) and hangs out with a ghost and a were-terrier. When she eats the brains of the dead, she inherits her midnight snack’s memories and thoughts, compelling her to fulfill last requests and avenge the dead.

Afterlife with Archie
Okay, one more fun zombie pick for you, this time in the Archie horrorverse. In this alternate reality, the town of Riverdale has been taken over by the undead, driving Archie and the gang out of town. A take on Archie that no one saw coming, this comic has been critically acclaimed and is paving the way for the upcoming CW series Riverdale.

Whether you’re looking for scary stories, zombies, serial killers, or creepy true tales, there are Halloween comics for everyone. So grab a bag of candy corn, throw on the Rocky Horror soundtrack, and get reading.