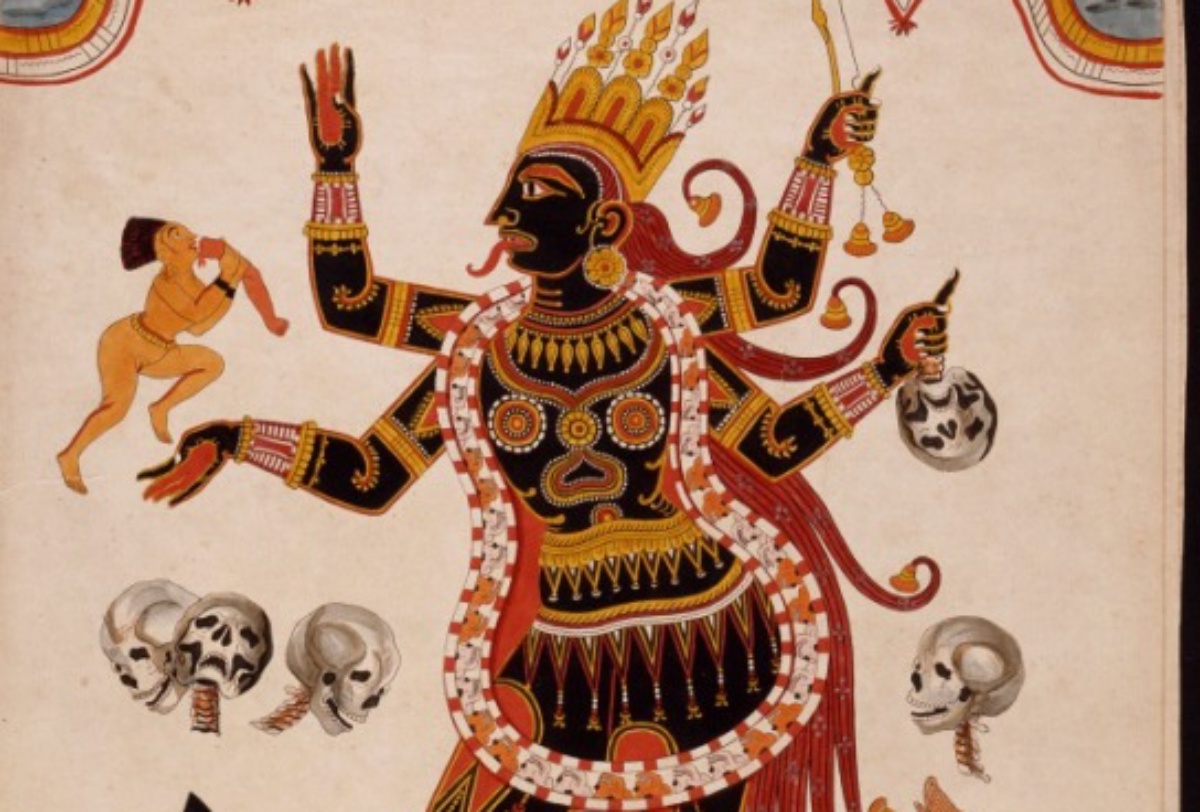 With Crazy Rich Asian out and slaying the box office, I wanted to look back at some of my favorite Asian mythological stories. So often when we talk about mythology, it is overwhelmingly Green, Roman, Norse, and sometimes Egyptian if we are feeling “exotic.”

Asian mythology is filled with fascinating characters and stories, and I’m highlighting 5 Asian Myths/Figures that I find super interesting. If you are looking for a collection of reimagined Asian myths, the anthology A Thousand Beginnings and Endings edited by Ellen Oh and Elsie Chapman is an excellent place to start, as it has stories from all over the Asian continent.

(5) Kali Will F*ck Up Your Life (Indian/Hindu Mythology)

Kali is so cool. While she is probably one of the most appropriated goddesses in Indian mythology, there are still a lot of people who don’t know the context of why she is stomping/dancing on her husband Shiva. That comes from the time she finished off one of the biggest foes in myth, Raktabija. Raktabija was a really annoying baddie because of the fact that any time a drop of his blood was split it would make another clone of him. As a response to this god-mod bullshit, Durga summons Kali in order to fight Raktabija.

Being an ultimate badass, Kali easily kills off Raktabija clones and in a move that would make Khal Drogo impressed, consumes Raktabija’s blood (you can guess how) and stops him from making any more clones, killing him dead.

Kali proceeds to dances on the corpses of her enemies, and seeing that her dancing is causing the world to end, Shiva takes the place of the earth and has Kali dance on him to spare the planet. Seeing that she’s accidentally hurt her husband, it snaps Kali our of her rage and she returns to her Durga form.

(4) The Fox Girl, or Naruto Could Have Gone Very Differently (Korean)

Due to anime, I have always had a passing idea of what a kitsune is, the trickster/lover fox spirit that has been in InuYasha, YuYu Hakisho and of course, Naruto. However, what I didn’t realize is that many Asian cultures have their own version of the fox spirit. One of the darkest stories about the Korean fox spirit, Kumiho, I first heard on the Myths and Legends podcast (episode 20).

“The Fox Girl” tells the story of a wealthy man who has a son but longed for a daughter (that’s a twist) and prayed every day for one. After years of prayer, he finally got his baby girl and she was deeply treasured and adored by her father. One day, when she was a teenager, after she went out by the mountains and didn’t return for a while, her father sent out a search party to find her. The young girl was found, but was not the same.

Shortly after her return cows starting dying. The cowherd stayed up at night to find the culprit and found the young girl magically putting her hand through the cow’s belly, pulling out its liver and eating it. The girl’s father did not want to believe it and dismissed them again and again until finally, his son decided to see what was going on. Like the others, he spotted his sister killing the cows. His father did not want to believe it, accused his son of being jealous, and exiled him.

During his exile, the young man came across a priest pretty much told him “you sister is def possessed by a fox spirit.” The son returned home with this knowledge only to find their home empty save for his “sister.” His parents had been eaten by her. The fox attempted to kill him as well, but he escaped. As the fox chased after him, still in his sister’s form, the young man threw three magic potions at the fox he’d gotten from the monk. The last potion created a blue lake that drowned the fox and before it died it finally shed the young girl’s form.

Yeah, I like Overly Sarcastic Productions a lot, but they also do a wide variety of mythology so them’s the breaks.

Banu Goshasp is one of the MVPs of ancient Iranian mythology. There are a lot of stories about Banu Goshasp, many of which are not translated into English, but two of the most popular were when Banu almost killed her own father when he tried some suspect parenting style moves.

He was trying to teach Banu a lesson about going out into the great world somewhere and disguised himself as a slaver and pretended to attempt to kidnap Banu. Not noticing it was her father and not wanting to be a slave, Banu attacked him and almost stabbed him to death before realizing “that’s not a slave trader, that’s my dad.”

However, that was not an end to Banu beating up dudes who attempted to bother her. She beat up potential suitors and challenged them to warrior tasks, like jousting, that she beat them in order to remain unmarried. She eventually did settle down with a hero, but he really had to work for it. In the Rejected Princesses book, one of my favorite things mentioned about Banu was her response to being insulted:

After a particularly nasty warrior insulted her for being a woman, she informed him she that was going to: shave off his beard; kill him; chop him up; and feed him to dogs. Not necessarily in that order, either. She carried through on around half of said threats.

Now it doesn’t say which half, but I’m going to say kill him and shaving his beard definitely happened.

(1) The Soul of the Great Bell (Chinese)

I read this story ages ago in a blue myth book that I held on to for years until my father donated my books to the library (without permission).

Stories about filial piety (the Confucian philosophical virtue of respect for one’s parents, elders, and ancestors) are very popular in Chinese tales—in fact, The Ballad of Hua Mulan is also an example of filial piety narrative. “The Soul of the Great Bell” is about a man named Kouan-Yu who was a renowned bellsmith, called upon by the Emperor to make a bell that would kill all other bell’s asses.

Kouan-Yu got to work making the bell and for some reason, the metal would not form together. He tried twice to make it and the Emperor was all right about one mistake, but two was deemed unacceptable. He was told that if he shamed the Emperor again with failure he would be beheaded. Really nice leadership skills.

Kouan-Yu had a daughter named Ko-Ngai who was beautiful and single because she loved her father too much to leave him. Hearing this news about her father she went to an astrologer for guidance (see, not just for this generation). The astrologer told Ko-Ngai that without the blood of a virgin, the bell would never take form.

When it came time for the bell to be formed for the third time, Ko-Ngai cried out her love for her father before jumping into the furnace filled with molten metal. Her handmaiden was only able to grab her shoe and Kouan-Yu had to be held back from jumping in with his daughter. The sacrifice worked; the bell was more beautiful than any other bell, and when the string was pulled for it to cry out the sound it made was: Ko-Ngai.

What are some of your favorite Asian mythological stories/figures? Let us know below!