5 Lesser-Known “Crimes of the Century” 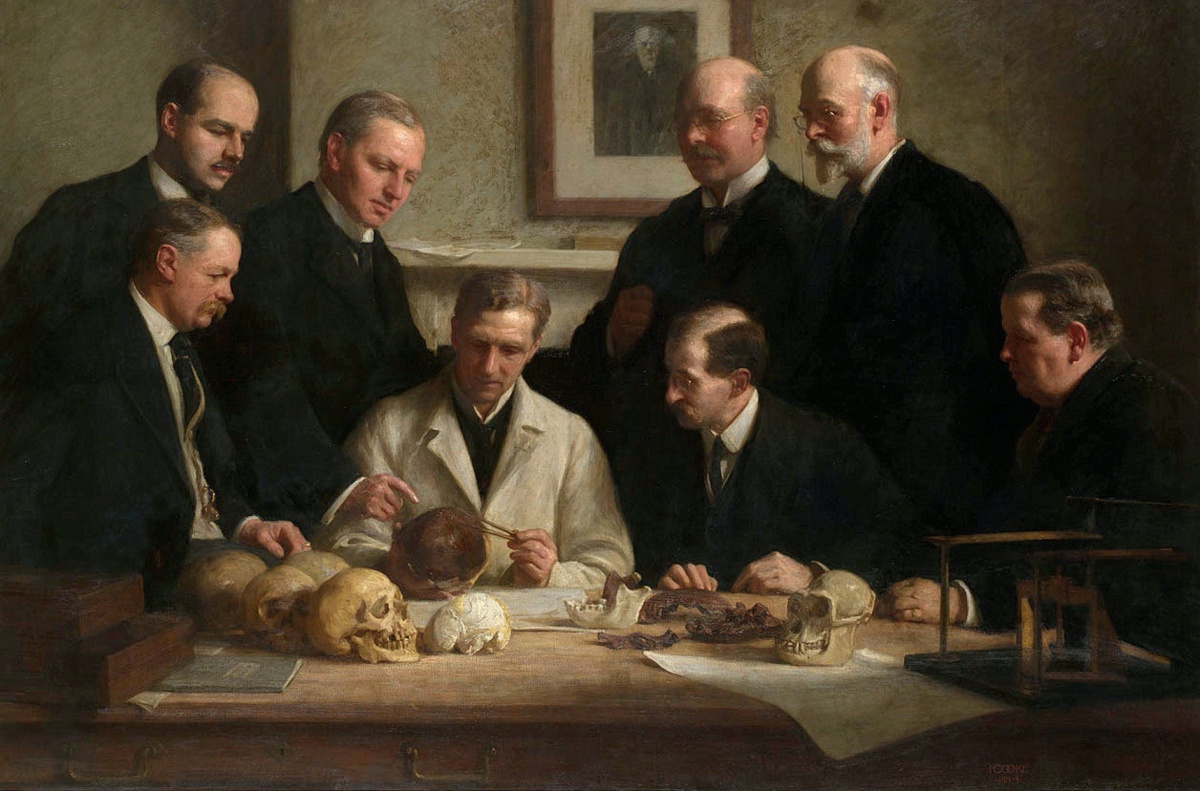 Throughout history, there have been many crimes labeled as the “Crime of the Century.” These include The Lindbergh Kidnapping, The Tate-Labianca Murders, and The O.J. Simpson Case, to name a few heavy hitters. Yet, not all crimes of the century are about murder and sex. Sometimes they’re about good ol’ fashioned fraud and theft. Here are five of their stories.

The idea that human beings as we are now are “descended from apes” is an oversimplification of a much more in-depth way that evolution shows us having common ancestors. Despite that, there was a fake fossil called Eoanthropus dawsoni that was supposed to be the “missing link” between us and the rest of our primate family. Called the Piltdown Man, it was discovered by Charles Dawson in 1912 in Piltdown, Sussex.

Dawson was an amateur archaeologist who was responsible for quite a few hoaxes, but this was his most famous and long-lasting. Upon the finding of this skull, its validity became accepted by the scientific community in England at the time. It was even referenced during the infamous Scopes Monkey Trial.

The hoax of the Piltdown Man began to fall apart when more human fossils were found in the ’30s. Upon comparing the fossil that Dawson had discovered to them, they could see that the Piltdown Man fossil had been altered from that of a 10-year-old orangutan, with its teeth ground down and bones chemically altered to look older.

In 1953, it was revealed that this was a fraud, but it did a lot of damage to the scientific community at the time because many scientists had used this “missing link” as evidence in their own work.

The Collapse of Barings Bank

Founded in 1762, Barings Bank had the notoriety of being the world’s second oldest merchant bank and the oldest in dear old England. Even Queen Bess II kept her money there. But in 1995, the collapse of the bank would mean a loss of £1.6 billion in today’s money. How did it happen?

Nick Leeson was the head derivatives trader at Barings; he had risen quickly through the company and became one of its stars. According to Time, “at one point, his speculations accounted for 10% of Barings profits.” Then, he bankrupted it by making fraudulent, unauthorized deals.

He risked huge amounts of money in the Japanese stock market, thinking it would go up. However, he didn’t predict the gigantic earthquake in Kobe on Jan. 17, 1995. That sent the market crashing, and Leeson along with it. He had invested so much money that it took over not only him but Barings itself. The bank ended up being bought by the Dutch for one British pound.

So what happens to you when you single-handled bankrupt a bank that is hundreds of years old at the ripe age of twenty-eight?

Let’s see … Leeson was sentenced to six and a half years in Changi Prison in Singapore, but then got out in 1999 when he had cancer. He wrote a book about this that got turned into a movie starring Ewan McGregor. Oh, and he was on UK Celebrity Big Brother 2018, where he finished in fourth place.

People are obsessed with this woman and her smile, which tracks, but still, in 1911, the obsession was taken to new heights when she was stolen from her home in the Louvre in Paris, France.

The borders were shut down. Pablo Picasso was implicated in the crime. Months went by, and everyone feared that one of the most iconic works of Leonardo da Vinci the Ninja Turtle would be destroyed. Then, news came from Italy that a man named Vincenzo Perugia had traveled to Florence with the Mona Lisa in a trunk, “hidden beneath a false bottom.”

He had been asking for a reward of 500,000 lire. You see, Perugia believed that the Mona Lisa had been stolen from the Italian people by Napoleon, so in his mind, he was simply bringing the picture home to Florence, where she had been “born.” The Italian people flooded the Uffizi Gallery in Florence where it was hung, weeping at the sight of it—which is a lot, but I cried watching Dragon Ball Z last night, so to each their own.

The Louvre, however, did get the painting back from Florence, and Perugia only spent a few months in jail because the Italian people weren’t really that mad about the whole thing.

Mona has been safely in France ever since.

There is a quote attributed to Groucho Marx where he reportedly said that Judy Garland losing her Oscar to Grace Kelly was the “biggest robbery since Brinks.” Well, here is some context for that quote.

On January 17, 1950, a group of armed men robbed the Brinks headquarters in Boston, stealing “$1,218,211.29 in cash and $1,557,183.83 in checks, money orders, and other securities.” It was dubbed the perfect crime because, despite the almost immediate involvement of the FBI, the robbers seemed to just vanish.

According to witnesses at the scene, “all of them wore Navy-type peacoats, gloves, and chauffeur’s caps. Each robber’s face was completely concealed behind a Halloween-type mask.” Everything about the robbery showed careful planning and research by those involved. The mob members who were assumed to be responsible for the heist fell victim to infighting, particularly Joseph “Specs” O’Keefe, who felt he had not been given his proper share.

Despite O’Keefe eventually turning on them and many going to jail, none of the money was ever recovered.

The Theft of “The Scream”

Now, back to art.

We’re all familiar with “The Scream” by Edvard Munch, although its German name is Der Schrei der Natur. It has been reprinted on countless socks and is probably one of the first memes. On Aug. 22, 2004, the painting was stolen for the second time, along with Munch’s lesser know work, the “Madonna.” The gunmen practically tore them from the walls and took off, causing a massive hunt for the paintings.

Unlike the other art heist above, there seemed to be no real motive for this theft other than chaos. It took two years for the art to be recovered. Many feared that the works had been burned, but while damaged from neglect, they were largely intact.

According to Smithsonian Mag, many believe that they were stolen to distract police from investigating the murder of a Norwegian police officer, hence the claims that the thieves seemed clumsy and even dropped the art on the way out.

Both had to be restored, and in May of 2008, both were put back on display in their new, damaged forms.