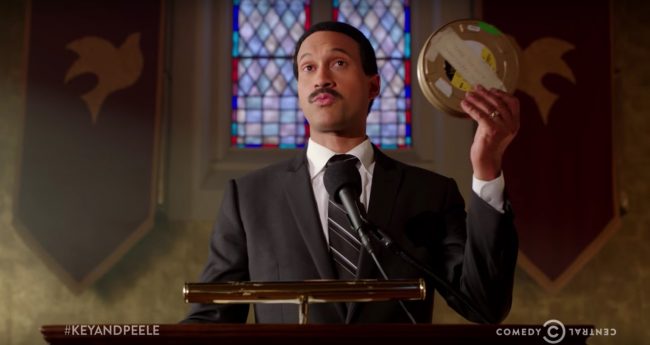 “I’ve been wanting to do horror for a long time, and luckily I’ve kind of gotten something of a training through comedy.” – Jordan Peele in an interview with Forbes.

To assuage the uncomfortable scares of Jordan Peele’s directorial debut in the racially-charged horror-comedy Get Out, which quashes the delusions of a post-racial America, Peele’s earlier comedic portfolio in Key & Peele can be a remedy. Comedy can relieve as well as commentate on human nature. Comedy can be just as much escapist entertainment as it can be a wake-up call loaded with awkward chuckles.

Here are 5 Key & Peele sketches that could purge the spooks out of your system while keeping you alert on the subject of racism and social justice. If you have yet to check out Get Out, consider these sketches the appetizer before the main course of the movie.

Two guys eavesdrop on two racist white women gossiping publicly about their racist attitudes, their remarks both fluctuating between condescendingly flattering and overtly insulting. The two guys veer a fine line between feeling offended while tempted.

Nazi eugenics is a menacing thing in real-life. In this sketch, it’s also a goofy thing that involves beets and cat toys.

This is a real cringe comedy sketch that commences in a subdued mood, a crafty tactic to make the middle awkwardly shock-inducing. The tonal swerves are effective as it rotates from solemnness, to tragic comedy, and then back to solemnness to recover dignity. It has a bone to pick with the ignominies of old timey reductive Hollywood stereotypes.

Stretched into its epic fire-balling and bird-chirping explosive proportions, this is a satisfying dig at the Magical Negro trope—or stereotype.

All this, just to make a troubled white boy feel better.

Oh Pro-Southerners, unable to really acknowledge what the Civil War was about.

The sketch opens on a harrowing scene that hits close to the headlines. Then it dissolves into the chipper and sprightly absurdity of a musical number dream in the utopia known as “Negrotown.”

With every ear-wormy beat and chuckle-worthy lyric, the song is loaded with anvils that can hit the heart.

“Hanging out in a group, doesn’t make you a gang,

every word that you say, ain’t considered slang.”

Like the “Dad’s Hollywood Secret” sketch, it reverts back to somberness. But unlike that sketch, it doesn’t find redemption for dignity and ends unambiguously unhappily ever after.

Depressed that it couldn’t just end happily on the dream?

That’s right, if this sketch is any indication, it’s not enough to dream of happy endings. We have a long way to go. It can take laughter and scares to guide us along the way.