Is the 24 Movie Ever Going to Happen? 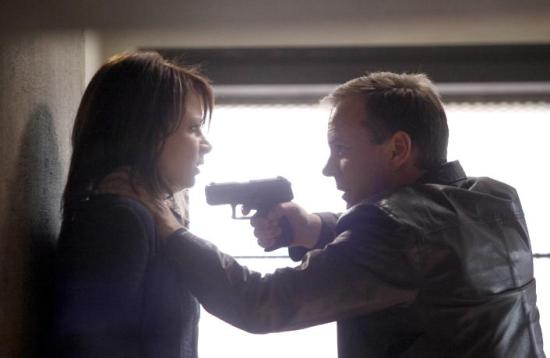 Reports have come out in the past few days that after the much-talked-about 24 movie was in “suspended animation,” now that the script written by State of Play screenwriter Billy Ray has been rejected by Fox. While there was no rush to produce a movie during the series’ run, which ended last May, it seems as if the momentum has stalled in the production of the movie that would continue the saga of rogue CTU agent Jack Bauer (Kiefer Sutherland).

Perhaps there’s a question of how to approach translating 24 for the big screen. After all, the main gimmick of the show was its being played out in real time over the course of 24 hours/episodes. Will the movie stick to Jack saving the world in one non-real-time day? Or in two real-time hours? And while the notion of a 24 movie has been talked about for years, what were their plans if they’d decided to kill Jack Bauer; an option that was always floated as a possibility? 24 producer Howard Gordon says in an interview with Assignment X that the movie was intended to be “broader” than the real-time concept as well as “international,” so there are a few hints at what they might have in mind. But Gordon seems to be only fleetingly involved with it (meaning, some people might tell him some things), and all other information is less than solid.

But one question really rings out: Are fans really clamoring for a 24 movie to begin with? For sure, Jack Bauer is one of the best television characters of all time, and since they did let him escape both death and the law, he’s still got some story left in him. (And probably some torture and shouting, too.) But is this necessary? Are the people behind one of TV’s best action shows willing to risk making a movie that will let down such rabid fans? Or is it in development hell because they’re taking every precaution against failure?

Can’t we just assume that Jack’s on a beach somewhere, finally chilling out?