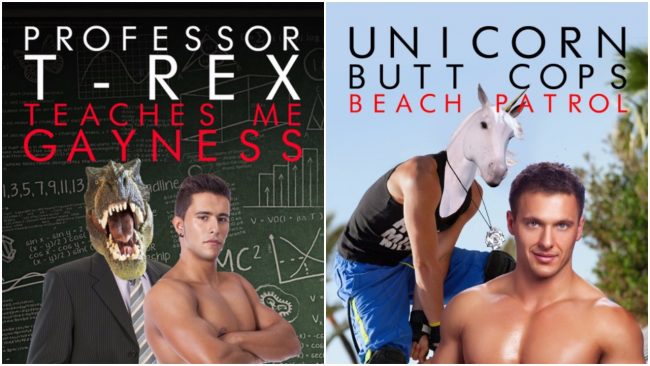 We kid, we kid. Or do we? In my book, Chuck Tingle—nominated this year under Best Fan Writer, and author of cult classics like Domald Tromp Pounded In The Butt By The Handsome Russian T-Rex Who Also Peed On His Butt And Then Blackmailed Him With The Videos Of His Butt Getting Peed On—should win all of the awards on Earth and beyond. Oh yeah, there are other nominees, too! To the silver rocket!

The Hugo Awards, which celebrate the year’s best in science fiction, will be announced at the World Science Fiction Convention in Helsinki, Finland on August 11. Via Tor.com, we can now gaze upon the illustrious finalists:

Alien Stripper Boned From Behind By The T-Rex by Stix Hiscock (self-published)
“The Art of Space Travel” by Nina Allan (Tor.com, July 2016)
“The Jewel and Her Lapidary” by Fran Wilde (Tor.com Publishing, May 2016)
“The Tomato Thief” by Ursula Vernon (Apex Magazine, January 2016)
“Touring with the Alien” by Carolyn Ives Gilman (Clarkesworld Magazine, April 2016)
“You’ll Surely Drown Here If You Stay” by Alyssa Wong (Uncanny Magazine, May 2016)

It seems as though this year, the alt-right Sad/Rabid Puppies campaigns to game the nominations have died down, though they’re still trolling: note the inclusion of Alien Stripper Boned From Behind By The T-Rex by Stix Hiscock under Best Novelette. I don’t want to give the Puppies any attention whatsoever except to note that I’m thrilled their trolling last year actually resulted in bringing Chuck Tingle to even greater prominence. Chuck Tingle is my favorite person to follow on social media and if you do the same you will not be sorry.

please enjoy new tingler POUNDED IN THE BUTT BY MY SECOND HUGO AWARD NOMINATION out now on amazon https://t.co/0RGUECOfF9 pic.twitter.com/TBujIFHXh9

No one works faster than Chuck Tingle, and few writers can claim as much topical and political resonance. Where would we be without Domald Tromp Pounded In The Butt By His Fabricated Wiretapping Scandal Made Up To Redirect Focus Away From His Seemingly Endless Unethical Connections To Russia?

In other finalist news, I was excited to see the excellent Black Mirror episode “San Junipero,” and happy/crying that there’s a nod for Carrie Fisher’s The Princess Diarist. It’s also thrilling that despite the Puppies, this year’s Best Novel finalists are a wonderfully diverse group, and are made up of four women and two men.

If I’m pulling for my former io9 editor Charlie Jane Anders’ magnificent All the Birds in the Sky I think that’s allowed, but no matter who wins, this year will be a testament to the evolving landscape of popular science fiction. The genre has always been about pushing the realms of what’s possible, and now its most celebrated creators reflect the diversity of the works being generated and the audience that adores it.

What do you love that made the cut?