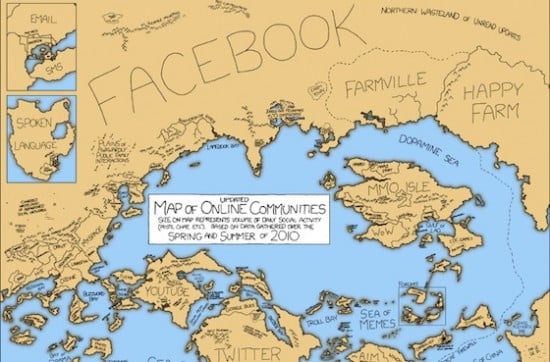 The Internet is an awfully big place where you can find just about anything — a fact that can be both a blessing and a curse, depending on what you find yourself looking at. As big and intimidating as the Internet can be, though, it’s also built to be easy to get around. It’s so easy to get around, in fact, that the trip from any one of the Web’s 14.3 billion sites to any other one is no more than 19 mouse clicks long, according to the calculations of one network theory researcher.

While it covers a lot of ground, a study published this week in the journal Philosophical Transactions of the Royal Society suggests that the Internet is actually a pretty small world after all. Just 19 clicks of separation is the new six-degrees of Kevin Bacon — or a secular version of 5 clicks to Jesus —  that puts your favorite disparate corners of the digital world in sometimes uncomfortably close proximity. Between the login for your work email and your favorite subreddit? Just 19 clicks. From Facebook to deviant sex? Also just 19 clicks — or less, depending on how risque your Facebook friends are. To get from this page right now to literally any other website in the world, you would need just 19 clicks. But please don’t go. We’d miss you.

The really surprising thing about this news, though, is that as the Internet continues to get bigger, the 19 clicks number doesn’t look set to rise. In fact, according to Albert-László Barabási, the Hungarian phsyicist who ran the numbers, the 19 clicks  rule holds true not only for traveling between any two of the 14.33 billion sites on the Internet, but also for making your way between any of the estimated 1 trillion documents, images, and videos those pages host.

If the theory holds water, man, competitive Wikipedia searching, eat your heart out — finding new trails between URLs could be the Internet sport of the future. Gladiators from across the world will map out the shortest paths between any two sites, blazing new trails while trying to avoid dead ends. 404 pages will become like quicksand, forever trapping explorers who forged their new paths too recklessly.