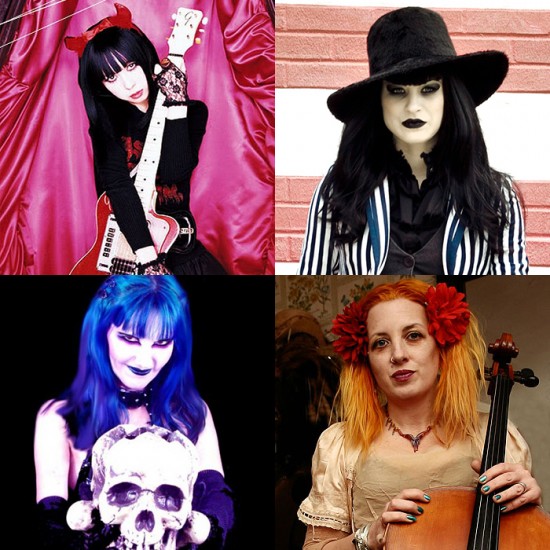 All Hallow’s Eve will soon be upon us, giving you another chance to cavort with spooks and spirits, conduct ghastly experiments, cast spells on friend and enemy alike and raise the dead from their eternal slumber. You’re going to want to have a soundtrack to do all of this to. Luckily, Halloween might be the most popular music-friendly holiday there is. And with so many great Halloweenish musical acts out there that are either made entirely of or led by women, I figured it’d be fun to make a list of them.

This is a non-comprehensive group that could easily have been much longer – but here are 15 such artists that I really like. Happy hauntings!

This all-female band – made up of frontwoman/guitarist Olivia Jean, bassist Ruby Rogers and drummer Shelby Lynne – are never seen without their witchlike uniforms, which always come topped with wide-brimmed black felt hats. The motif aligns nicely with their “garage goth” musical style. The song you hear here also currently serves as the theme to another horror kitsch institution: the latest incarnation of Elvira’s Movie Macabre.

Female rock singers were uncommon in 1969, and occult-inspired rock was pretty much unheard of. Coven, who came out with their album Witchcraft Destroys Minds and Reaps Souls in that year and were led by vocalist Jinx Dawson, are one of those bands that sound like they couldn’t possibly have been real. But they were, and they predated Black Sabbath’s first album by a year. You wouldn’t be blamed for wondering if Ozzy and co. were inspired by Coven –  the first track on their album is titled “Black Sabbath,” after all.

The brainchild of singer/songwriter/producer Debra Fogarty and featuring additional vocals from Severina X Sol,  Diva Destruction is a fantastic example of gothic dance music. Their songs tend to have overbearing, low-fidelity electronic beats that remind me of early-2000s video game soundtracks. Which I’m definitely not complaining about.

Cassandra Peterson‘s alter ego isn’t just a horror host whose celebrity status has been improbably long-lived – she’s also a singer. She’s released six albums, most of which are compilations of others’ material, but she’s recorded a few herself. In 1994 she tried her hand at this outstanding “Monster Rap” (which is really more like half that and half a parody of Madonna‘s “Vogue”). Listen for some delightful puns, like when she says she hopes Dracula “practices safe sucks.”

45 Grave were pioneers of the genre of “deathrock,” which I think would be most easily summed up as horror-themed post-punk. This L.A. outfit were led by a charismatic frontwoman with one of the most simultaneously awkward and brilliant pun stage names ever: Dinah Cancer. They really only had one full album, 1983’s Sleep in Safety, but Cancer revived the idea of the group and put out a new 45 Grave record with all new members (aside from her) last year.

Hannah Fury’s genesis as a songwriter began curiously: as a musical passion project to accompany the novel Wicked (before the Broadway musical existed). From those beginnings, Fury has built an impressive career of stark, melancholy keyboard ballads, with a voice that reminds me a bit of Tori Amos. A gifted musician but not a natural performer, Fury has never performed live, and has self-released every one of her albums on her own recording label, MellowTraumatic Recordings.

I wanted to include this band because I think they epitomize that ’90s “mallgoth” vibe better than anyone. (I don’t use that term derogatorily, I personally liked the shortlived semi-mainstreaming of the style a lot.) Centered around singer Jessicka and bassist/keyboardist Robin Moulder, Jack Off Jill featured a similar sound to fellow Florida natives Marilyn Manson, whom they frequently toured with. They tell me this song isn’t supposed to literally be about a cat, but I find it much more enjoyable to assume that it is.

This is one group that I really cannot say enough about. Comprised of a rotating cast of musicians led by persistent frontwoman Melora Creager, this cello rock outfit consistently puts out material that is weird, spooky, and unironically excellent. Historical arcana plays a big part in many of Creager’s songs – at times the effect is akin to a neo-Victorian version of They Might Be Giants. But as you can tell from this song, they aren’t afraid to jump with both feet into creepyworld, either.

Despite a generic and non-descriptive band name, this Seattle band established a very distinct horror-tinged sound during the ’00s. Mixing Ryann Donnelly‘s ululating vocals, pop-punk melodies and pounding arena rock-like guitars, Schoolyard Heroes’ work sounds to me like the soundtrack to a Halloween-set movie where teenagers fight the supernatural at their high school. So in that sense, I guess these fictional fictional characters I’ve imagined would be schoolyard heroes. Maybe this name isn’t as pointless as I thought.

Siouxsie and the Banshees

Not all of their songs are Halloweenish, but it wouldn’t feel right to have this list without the pioneers of female-led goth rock. Singer/songwriter/post-punk legend Siouxsie Sioux was with the band for 11 studio albums, later moved on to a side project with drummer/husband Budgie called The Creatures, and released her first solo album in 2007.

Tomoko Kawase‘s original band, The Brilliant Green, was gritty and down to earth. But her alter ego Tommy is colorful, theatrical and largely about a semi-cute interpretation of Halloween. (She has also recorded as Tommy February6.) Her songs, many of which are more than 10 minutes long, lurch back and forth from pop to hard rock and from English to Japanese, all in service of praising the spirit of October 31. And her 2009 album has one of my favorite titles ever: Gothic Melting Ice Cream’s Darkness Nightmare.

Named for a cult icon who recently died, VHOKB is as much a punk group as it is a long-running transgressive art project. Frontwoman Kembra Pfahler looks to camp horror for inspiration, with vivid song titles like “Chopsley: Rabid Bikini Model” and “Do You Miss My Head.” But where she sets herself apart is in presentation – I’m pretty sure no shock rocker alive can top her when it comes to outrageous appearance. Video is definitely not safe for work.

Horror punk bands are a dime a dozen, but this Liverpool group has a bouncy, upbeat efficiency that I think deserves to be singled out. Lead singer Zombina Venus Hatchett‘s youthful voice sounds simultaneously incongruous and perfect for the subject matter. And I also give them a lot of credit for doing what you’d expect more bands in their genre to do: explore the world of not just B horror, but B sci-fi as well.

Dan Wohl blogs about baseball for a living, and he also had a Halloween-themed radio show in college called “The Graveyard Smash.” He would love for you to follow him on Twitter: @Dan_Wohl.