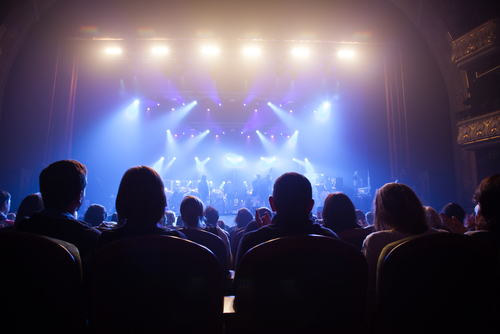 When Lin-Manuel Miranda departs Hamilton tonight, it will mark something of the end of an era for the groundbreaking Broadway musical. Though the show will run for many years to come—including a sit-down production in Chicago—it will do so without its creator at the helm. In honor of how dramatically Miranda’s show has changed the game for Broadway diversity, here are 13 lesser-known musicals from the past 20 years that helped paved the way. Though it’s by no means exhaustive (we’re assuming you’re already familiar with more mainstream shows like Rent, Dreamgirls, and Hairspray), this list will give you a good place to start exploring the breadth of what Broadway has to offer. From race to gender, sexual orientation to religion, these shows tell diverse stories of all kinds. And the best part is, all of these musicals have cast albums that are either streaming on Spotify or available for download on iTunes and/or Amazon!

In The Heights: Before Miranda famously performed an early draft of Hamilton’s opening number at the White House, he made waves with his debut 2008 show, which won the Tony for Best Musical. Featuring an almost entirely Latino cast, In The Heights centers on a tight-knit community in New York City’s Washington Heights neighborhood. Miranda himself plays bodega owner Usnavi, while Hamilton’s Chris Jackson also has a major role in the show. Though it’s set in the present day and features the same hip-hop style Miranda utilizes in Hamilton, In The Heights has the feel of an old-fashioned character-driven musical from Broadway’s Golden Age. (Best song: “96,000”)

Bring in ‘da Noise, Bring in ‘da Funk: One of the biggest problems with Broadway is that even as musicals themselves become more diverse, their creators still tend to be overwhelmingly white. Hamilton and In The Heights are unique because they not only feature people of color in their casts, they were also created by a person of color. That’s also the case with 1996’s Bring in ‘da Noise, Bring in ‘da Funk, which featured an all-black creative team including Savion Glover, Daryl Waters, Zane Mark, Ann Duquesnay, Reg E. Gaines, and George C. Wolfe. The tap musical revue traces black history from slavery through the mid-1990s. The dance-heavy show served as a vehicle for Glover and even featured a pre-West Wing Dulé Hill in the original cast. (Best song: “Bring in &#39;da Noise Bring in &#39;da Funk”)

Ragtime: This 1998 ensemble musical is perfect for those who love Hamilton‘s dense, complicated history. The show follows three different groups of people living in turn of the century New York: upper-class white suburbanites, Eastern European Jewish immigrants, and African-Americans. Though the story is fictional, the musical features cameos from real-life historical figures like Booker T. Washington, J.P. Morgan, Henry Ford, and Emma Goldman. With a rich score by Stephen Flaherty and Lynn Ahrens, the musical delves into the harsher realities of American history including racism, prejudice, and misogyny. (Best song: “Wheels Of A Dream”)

Allegiance: Though it failed to earn any Tony nominations, another new musical contributed to the immense diversity on Broadway this year. Starring George Takei and loosely based on elements of his own life, Allegiance explores the internment of Japanese Americans during World War II. Not only was it the first show with an Asian-led cast since the 2002 revival of Flower Drum Song, it was the first ever Broadway musical created by, directed by, and starring a mostly Asian American ensemble—including beloved Broadway star Lea Salonga. Though the show received mixed reviews and closed after a few months, the cast recording stands as a testament to its historic and historical run. (Best song: “Paradise”)

Kinky Boots: This 2013 musical with music and lyrics by Cyndi Lauper builds the idea of acceptance right into its core. When struggling British shoe factory owner Charlie meets a drag queen named Lola, he sparks upon the idea for a brand new business venture: he’ll work with Lola to design high-heeled boots that are sturdy enough for drag queens. With the help of her “angels” (i.e. glamorous drag performers) and her friendship with Charlie, Lola helps open the minds of the small-town factory workers. The six-time Tony winning show—which picked up the trophy for Best Musical—is a fun feel-good pop musical with a whole lot of heart. (Best song: “Raise You Up/Just Be”)

The Color Purple: Anyone who tuned into this year’s Tony Awards was likely blown away by the performance from the cast of The Color Purple. The show first premiered in 2005 with LaChanze in the lead role and Hamilton’s Renée Elise Goldsberry in the cast as well. This year’s revival, meanwhile, featured Orange Is The New Black’s Danielle Brooks, Jennifer Hudson, and Cynthia Erivo—who rightfully picked up a Tony for her stunning performance. Based on the Alice Walker novel that also inspired the 1985 film, The Color Purple follows a young black woman coming of age in the early 20th century as she learns to love herself despite her challenging upbringing. (Best song: “I’m Here”)

Aida: This Elton John/Tim Rice Disney musical lends a contemporary pop flare to Giuseppe Verdi’s famous opera. When a Nubian princess named Aida is captured by a group of Egyptians, she quickly finds herself in a love triangle involving two betrothed Egyptian rulers. Torn between following her heart and leading her people, Aida must decide what path she will follow. While there’s little nuance to the over-the-top score, it’s perfect for those who love epic pop musicals like Wicked or Evita, and a fantastic showcase for star Heather Headley, who most recently performed with the cast of The Color Purple at this year’s Tony Awards. (Best song: “Written In The Stars”)

West Side Story: While the original Leonard Bernstein/Stephen Sondheim musical about warring New York City gangs premiered almost 60 years ago, a 2009 revival offered a new twist on the material. With help from Miranda, the production translated some of the show’s lyrics into Spanish to better reflect the experience of its Puerto Rican characters. “I Feel Pretty” became “Me Siento Hermosa” while “A Boy Like That” became “Un Hombre Asi.” Though the production eventually reverted some of the Spanish lyrics back into English, the cast recording captures the full multilingual experience. (Best song: “Tonight (Quintet)”)

Parade: This historical musical by Jason Robert Brown explores a real-life story of anti-Semitism in 1913 Georgia. Jewish factory owner Leo Frank finds his life turned upside down after he’s accused of raping and murdering a 13-year-old employee. Initially suspicious of a black night watchman, the town eventually turns on Frank and his trial becomes a vicious media circus. With a lush, haunting score, the show examines the complicated nature of prejudice and the dangers of mob mentality. (Best song: “This Is Not Over Yet”)

Bring It On: Though Hamilton and In The Heights are the most famous musicals to Miranda’s name, he also teamed up with Tom Kitt and Amanda Green to pen lyrics for this 2011 musical adaptation of the Kirsten Dunst cheerleading comedy. Rather than follow the plot of the movie, the musical invents its own story about a privileged white high schooler named Campbell who is redistricted into inner-city Jackson High School just weeks before her senior year. After initially struggling to fit in, she teams up with Danielle—the head of Jackson’s dance crew—to form a cheerleading squad that celebrates the best of what Jackson High has to offer. (Best song: “It’s All Happening”)

Violet: Much like Lin-Manuel Miranda, composer Jeanine Tesori has brought a diverse collection of stories to Broadway over the years. The first of her shows on this list tells a unique kind of female-driven story. Years after her face was horribly disfigured in a childhood accident, Violet Karl sets off to be healed by a televangelist in 1964 Tulsa (the disfigurement is left to the audience’s imagination). Along the way she befriends two soldiers—one black and one white—and the show proceeds to tackle themes of social expectations, racial prejudice, and female empowerment. Following a small but successful Off-Broadway production in 1997, the show finally enjoyed a well-reviewed Broadway run starring Sutton Foster in 2014. (Best song: “On My Way”)

Fun Home: Broadway is particularly welcome to stories about the LGBT community and perhaps none are more powerful than Tesori’s Fun Home, which won the Tony for Best Musical in 2015. Based on Alison Bechdel’s graphic novel, the show explores Bechdel’s complicated relationship with her closeted father and her own coming out process. The five-time Tony Award winning show is set to close this September, but its cast recording will stand as a testament to its innovative run. (Best song: “Ring Of Keys”)

Caroline Or Change: Tesori teamed up with Pulitzer Prize winning author Tony Kushner for this 2004 musical, which follows a black single mother and maid named Caroline Thibodeaux who works for a Jewish family in 1963 Louisiana. Set against the backdrop of the Civil Rights Movement, the show focuses on Caroline’s stoicism in the face of personal and social upheaval as well as the enormous personal sacrifices she makes to support her family. (Best song: “Lot’s Wife”)

Honorable mention: The Scottsboro Boys: Based on a landmark 1930s legal case in which nine black teenagers were unjustly accused of raping two white women on a train, The Scottsboro Boys explores the racist legal system in which the teenagers were tried. One of the final collaborations between legendary musical theater duo John Kander and Fred Ebb, the show imagines the boys using minstrel show tropes to tell their own story. Though The Scottsboro Boys explores an important story in American history with a mostly black cast, it also drew controversy for its use of minstrelsy and black face. While director Susan Stroman maintained that the show deconstructed and critiqued those tropes, The Scottsboro Boys stands as a reminder of how important it is that diversity extend beyond just the cast. (Best song: “Commencing in Chattanooga”)

Did any of your favorite diverse musicals get left off this list? Leave a note in the comments, and tell your fellow readers where they can watch it or listen to the soundtrack!

Caroline Siede is a freelance writer living in Chicago where the cold never bothers her anyway. Her work touches on everything from feminism and social justice to Jane Austen and superheroes. You can find her writing at The A.V. Club, Quartz, and Boing Boing, and listen to her regularly discuss time travel on her podcast Debating Doctor Who.