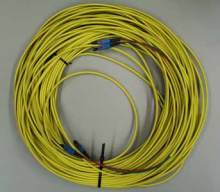 Tim Strong of TeleGeography Research says that the new record speed is far beyond the world’s current capacity, as the total capacity of one of the world’s busiest routes, between New York and Washington D.C., is only a few terabits per second, a speed dwarfed by the 109 terabits per second record. Strong does point out, however, that traffic has been growing 50 percent each year for the past few years.

The runner-up record-setter, Dayou Qian, achieved a speed of 101.7 terabits per second using a method that employed 370 separate lasers, each one carrying a small amount of information, but combining to form a large, single data transfer sent down 165 kilometers of fiber optics.

Though these speeds aren’t practically applied anywhere as of yet, it’s not a stretch to think huge data centers may be using these methods of data transfer soon, as we live in a world dominated by the Internet, and companies like Google and Amazon are gigantic and show no signs of slowing down anytime soon.