Over 1,000 Turtles Slowly Escaped From Captivity And Not A Single Person Grabbed A Camera 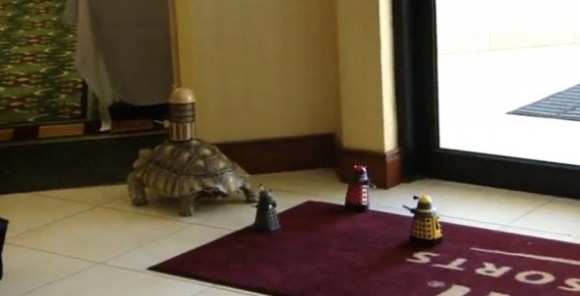 More than 1,000 turtles escaped a turtle farm in northwest Georgia this morning after vandals broke down the fences surrounding their turtle ponds. According to local authorities, a mix of  snappers, Eastern paints and yellow-bellied sliders ambled directly to nearby ponds and creeks.

Perhaps the most shocking part of this tragic (or perhaps triumphant) turtle tale is that there is not a single picture of the incident to be found on the internet. I know, I know, shocking, isn’t it? Most turtles walk under .5 miles per hour, and not a single person had the time go whip out their iPhone and take a video of this momentous escape? Darn you, sneaky turtles!

So, since we’re lacking photographic evidence of this slow-speed escape, we’ll provide some videos of what it probably looked like.

First, the turtles definitely had to eat. Busting out of jail is hard work!

Then, I’m sure they took to the sewers with their skateboards, thus eluding media attention and capture…

I bet there were accidents along the way, but turtles who escape together stick together…

And, in the end, I’m sure they made it to freedom. I hope there’s pizza involved.

(via The Norman Transcript.)