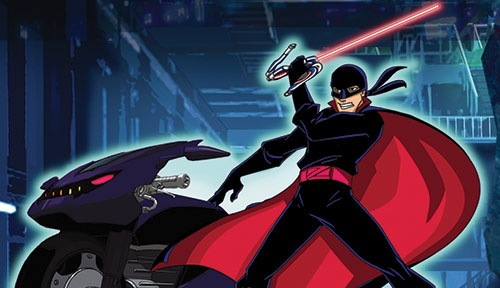 Any excuse to remind more people that a “post-apocalyptic Zorro” was a concept Fox Studios was playing around with two years ago.

Any excuse to remind more people that Zorro: Generation Z was a thing that happened.

I’m telling you, Sony, I’m much more interested in a self-consciously ridiculous futuristic Zorro reboot with lasers and neon-lit urban landscapes than I am in an un-self-consciously serious take on another pulp adventure. But go ahead, try me.

The ambition of the movie is less traditional swashbuckler, and more of a Dark Knight-style unveiling of the character with a new backstory, gritty realism and emotional core. There will be swordplay, combined with the martial arts that came from Europe and created a deadly combination of action and lethal fighting systems that combined swords, daggers, grappling and bare knuckles.

You know, there’s actually a lot of real history that could be incorporated into the basic story of Zorro in order to give it grit. American expansion westward, into, for example, annexed territory in California and Texas, was a process that pushed into spaces that had been conquered and “civilized” by European settlers for several generations already. What became clear over time was that the things that American settlers had in common with Spanish descended settlers (like the subjugation, conversion, and cultural erasure of Native peoples), did not outweigh their differences in language and religion. Mainly that Spanish descended settlers definitely did not count when it came to Manifest Destiny, and already having your own system of even western-style government didn’t mean that white settlers wouldn’t run you off the ranchero your family had tended for three generations.

I’m just saying, American audiences like freedom fighters and rebels fighting against invasion forces, and there’s nothing more gritty than a story where everybody is a kind of bad guy. Anything for Hispanic representation in Old West movies better than, say, Cowboys vs. Aliens.