Zoe Saldana Is In An “Action Frenzy” And Loving It 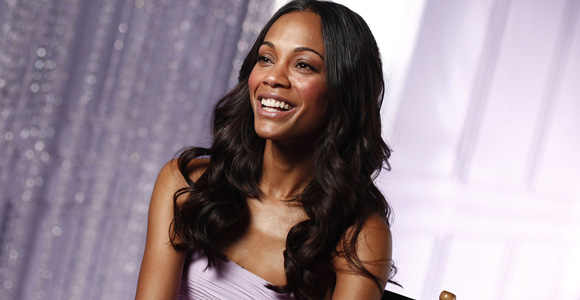 Zoe Saldana is a busy women these days. She’s doing tons of press for Star Trek Into Darkness plus, now that it’s been revealed she’s playing Gamora in Marvel’s Guardians of the Galaxy, she’s fielding those questions too. She recently delved into how her genre roles could be compared and gave an update on her Nina Simone biopic.

The actress spoke with Collider about her busy slate and said she was relieved to finally be talking about Star Trek. Considering she’s had to tackle a few languages in her roles, they asked which was more difficult to learn, Klingon or Na’vi from Avatar?

Klingon was a little more difficult, I have to say,” she told them. “Even though I had more dialogue in Na’vi as I spoke Na’vi throughout, my character only speaks Na’vi and speaks English with a Na’vi accent. It was still much more difficult to learn Klingon.” (She should try singing in Klingon.)

In her next genre role, Saldana will play Gamora, a superhuman and last of her species. “I’m going to get to play green, I’ve been a blue one, so might as well be green,” she said. “I really like the director, James Gunn, I responded very, very well to the script. I loved the casting decisions they’ve been making so far. I can only hope we kick ass and we have a great time while we’re putting the film together. And that the result of that, the audience will respond very positively to it and hopefully we’ll be able to make just as much as Iron Man is making right now.”

The actress has a nice scorecard when it comes to genre roles now so Collider asked whether or not stepping into another potential franchise was something she considered before saying yes to Gamora.

“I haven’t thought about it that way, up until this tour actually, when it was brought to my attention,” she said. “I read scripts and if I respond well to the story and especially to the character that they want me to consider or that I’m going after, that’s what I do.  And then, all of a sudden I stop, and I go back and go, ‘Oh my God! These three things have so much in common,’ and then I just keep going. It’s not something that I’m strategically looking after or that I’m finding because I’m avoiding other things. It just so happens that I’m in a frenzy, I’ve been in the last couple of years in action frenzy and I guess I gravitate a lot towards these kinds of characters that are very physically active.”

But Saldana does have another role coming up that’s entirely different, that of songstress Nina Simone. Here’s the latest on that: “I know that Cynthia Mort, our director, is still editing it and she’s taking her time as she should.  This film is the kind of film that needs time.  We shot it and it was a very intense experience, very beautiful, and I’m very happy and proud I was a part of it.  Now she’s putting it together and then I have to go back to the studio and put all the songs together as well.”