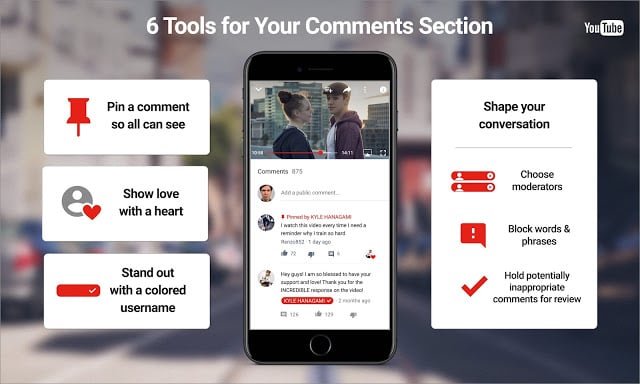 YouTube comments are the worst. But YouTube–and, by extension, their parent company Google–seems to be aware of that problem, and they’re working on it.

YouTube has had comment moderation and harassment reporting tools for a while now, although they’re somewhat onerous to use. Users have had to report comments individually for consideration, and that’s a chore. Plus, channel owners end up with the additional work of having to moderate comments themselves. Now, at last, that chore is going to get a bit easier.

Thanks to a new update announced by YouTube today, channel owners will be able to cut down their workload by blacklisting certain words or phrases, as well as hold potentially offensive comments in a queue for review. (You might recognize those two moderation techniques, since we actually use them right here at The Mary Sue! Certainly makes our lives easier.)

A third way that YouTube channel owners can cut down on their workload is to designate their favorite followers as comment moderators. This was a change that actually got introduced earlier this year, but even so, it’s another example of how YouTube is trying to make moderation easier.

Positive reinforcement is always effective, too, so YouTube has introduced some ways for creators to show love to the types of comments and feedback they want to encourage. Those new features include the ability to pin certain comments to the top of a thread, as well as “creator hearts,” which sounds like a special “like” that indicates the YouTube video creator hat-tipped that post in particular. There’s also been a slight change to the creator username appearance: “your username will appear under the text with a pop of color around it so your viewers can easily tell that the comment is coming from you.” So, if you’re talking to your fans in the comment thread, they’ll instantly realize you’re the one behind the video they’re commenting on.

Basically, all of those changes make it easier for creators to interact with their comments sections on YouTube. Since the administrative aspects of running a YouTube channel can feel like a chore, particularly if it’s a relatively popular one or if a video goes viral unexpectedly, it’s nice to see YouTube giving users more tools to deal with that problem. Now if only other services online would follow suit … !