Witcher’s Yennefer Telling Men to F Off: 2020 Mood We Need | The Mary Sue

Adapted from the books by Andrzej Sapkowski, Netflix’s The Witcher is produced and created by Lauren Schmidt Hissrich. It’s clear that women are involved in creative decisions for the show, especially since female characters are allowed to be angry and are unapologetic in their quest for power. Yennefer is such a character, though her characterization is not perfect. There are conversations to be had about ableism, and sterilization as a price to pay for power is problematic for many reasons.

However, Yennefer, with her enviable eyeshadow and a wardrobe that will inspire much cosplay this con season, can be a source of inspiration for angry women.

It’s an election year now, in America, and we are still so tired, but we’re also angry. In fact, we may be so exhausted from all the pent-up anger we’ve accumulated in our lives, but especially since 2016. Television and movies are always a great escape, but the fantasy genre, in particular, has had its fair share of issues in how it treats its female characters. Sometimes, we need to escape into something that’s empowering and makes us feel like we’re welcome in this world.

Being angry is an acceptable behavior for men because it shows aggression, a behavior seen as positive when associated with masculinity. When women are angry, they are called hysterical, destructive, and shrill. Being angry, having a passion for something, is a driver of change, and perhaps this is why men are historically so afraid of and eager to police angry women.

Yennefer’s chaos, her magic, is a great metaphor for the rage of women. Yennefer is abused and sold for less than a pig, seemingly unable to control anything in her life. So, she taps into her magic, which, according to Tissaia, “is the most dangerous thing in this world. It is all around us all the time. Volatile and powerful.”

Like chaos, a woman’s anger is ever-present. Even if it’s not our driving emotion at the moment, it’s always there in the background, because it’s impossible to navigate our day-to-day lives without encountering some form of sexism or thinking about our safety. If we had magic, the burden of worrying whether or not we’re going to get murdered if we turn down a man’s advances or refuse to smile at them wouldn’t weigh us down. Then, of course, there’s the constant barrage of marketing messages that tell us we are never skinny or beautiful enough.

Yennefer is an alluring woman before her physical transformation that makes her traditionally beautiful. Istredd, Yennefer’s first lover, offers to share his life of dusting stuff with her, to which she says it sounds like “slow suicide.” He retaliates, saying she’s just angry because she lost her chance to be beautiful, a common male oversimplification of a woman’s desires. She says, “I want to be powerful … it is what I’m owed.” She has conviction in what she is worth, and it’s much more than the price of a pig. This is the kind of energy that women need to harness this year.

When Yennefer finally meets the show’s title character, Geralt of Rivia, they come to blows over what to do with a djinn. Geralt is in the middle of explaining that the djinn is definitely gone when the djinn makes his presence known, to which Yennefer snaps, “Do go on. Tell me how stuff works.” Many women have felt this way when they are an expert in something, only to have a man explain that exact thing to them as if they are not. There are studies and viral examples of this across the internet (keyword: “mansplaining”), but it’s so much a part of the experience of being a woman that you can just take our word for it.

Yennefer’s best line happens in this same episode while she’s trying to contain the djinn in her body. Geralt screams that becoming a vessel will make her lose control, and he wants to help her. Yennefer bellows back, “You heroic protector. Noble dog. Permitting my success so long as you command it yourself. Fuck off! I’ll do this myself! … I want everything!” Her back is arched dramatically and painfully, and her “fuck off” resonates deep in our souls.

While it’s true that Geralt did want to help and, in the end, she actually did require his help, it’s not about his intention. Yennefer didn’t want his help. She doesn’t need him to pass judgment on her for why she tries to contain the djinn and why she’s going after a dragon. When Geralt inserts himself into the situation, or tells her that she would be a bad mother, Yennefer is rightfully angry.

Similarly, women are tired of having to be tied to a man in order to have success. Think about the likelihood of having an all-women presidential ticket in 2020, for example. This isn’t the fault of just men—it’s the fault of a society like ours, that’s built around men as the norm and women as the “other.” Women, especially women of color, have to work so much harder just to have the same opportunities as their white male counterparts, even more so in male-dominated fields like science and politics.

Truth be told, Yennefer should have slapped Geralt across his beautiful, chiseled face when he said she’d be a bad mother. Being judged on our capacity to be nurturing is another infuriating recurring experience for women. So much of a woman’s identity, whether or not she chooses to be a mother, is wrapped around the concept of motherhood, because whether or not we are mothers, we are expected to be nurturing caregivers.

Once the gold dragon tells her that she will never “regain her womb” (a weird bearer of bad news, for sure), Yennefer seems to have nothing left to give. Tissaia encourages her, but Yennefer doesn’t realize that her legacy is not tied to progeny—it’s her saving the entire continent. With Tissaia’s urging, Yennefer stops the incoming Nilfgaardians and protects Cintra by unleashing her chaos. She literally burns them all. Yennefer, impressively, is able to maintain some control, making a pocket for Tissaia in her explosion of power, saving her. That’s the last we see of Yennefer of Vengerberg in The Witcher Season 1.

It’s symbolic that Yennefer’s power culminates with fire and her screams, as she thinks about everything she’s ever felt and buried. This is her ultimate cathartic release, and it was a long time coming. Throughout the show, including this final battle, Yennefer screams primally when she’s trying to take her magic to the next level. How many of us have wanted to scream this way in our frustration at our mistreatment, only to instead stifle it with a pillow?

We should also listen to Tissaia when she says, “Let your chaos explode.” Let’s be ambitious, aggressive, and fight for the change we want in society. Systemic misogyny isn’t going to disappear magically, but destroying it begins with us making it clear that we, too, deserve everything. Our magic is in channeling our anger into words and actions. When we imagine the most powerful version of ourselves, we need not have violet eyes like Yennefer, but we can be inspired by her swagger and chaos.

Big Yen Energy is exactly what we need in 2020. 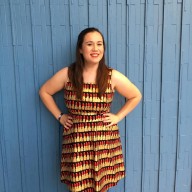 Angie is a freelance entertainment journalist based in SoCal whose hobbies include boxing and going to Disneyland. A Ravenclaw at heart, she'll read the book before she watches the thing.