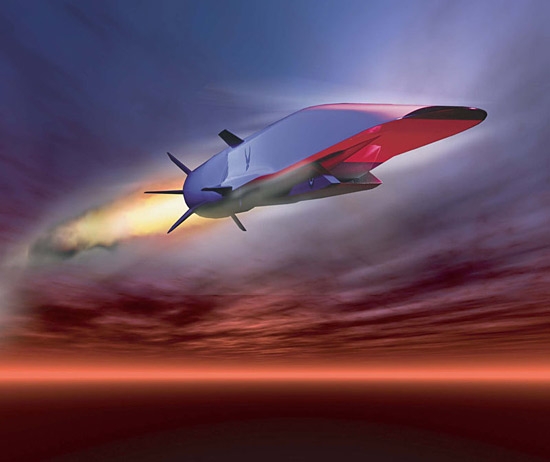 The sound barrier isn’t the only thing the Air Force’s X-51A Waverider (sweet missile name) shattered in its first independent test flight yesterday. The plane flew at Mach 5, the speed known as hypersonic (sweet speed name), for all of 200 seconds without losing acceleration. The record until this flight was what now seems like a meager 12 seconds.

The Waverider was launched from a B-52 Stratofortress (really sweet plane name) and used a rocket booster to zoom up to Mach 4.8. When that booster was cast off the missile, the scramjet engine itself took control. This supersonic cumbustion engine actually creates a shockwave which the missile basically rides through the sky. Thus Waverider. Also, somewhat reminiscent of Dolphin Olympics. After its hypersonic flight came to a close, the Waverider crashed into non-shock waves of the Pacific Ocean, never to be seen again. No, seriously, all that technology and they’ve got to just let it sink. But no worries, they have three more in storage somewhere.

According to DVICE, program manager behind the scramjet project Charles Brink said, “We equate this leap in engine technology as equivalent to the post-World War II jump from propeller-driven aircraft to jet engines.”

For some extra context, there’s also this video highlighting the missile project from before the test flight.

I’m sorry, I still can’t get over the word “Stratofortress.”