Let’s Talk About the Women of Marvel’s WandaVision 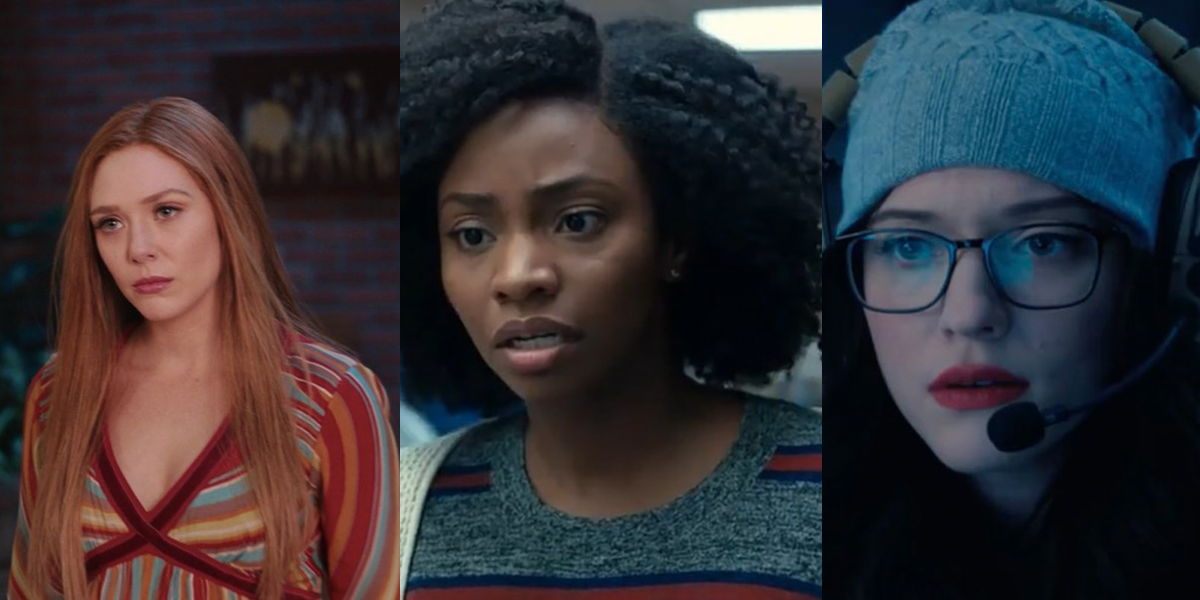 Marvel and Disney+’s WandaVision is, for the most part, a show about Wanda Maximoff, but as the series continues on, we get to see more of the women trying to tackle this world and what’s going on with Westview. So, let’s take a moment to explore Monica Rambeau, Darcy Lewis, and the other women trying to help/stop/trapped by Wanda Maximoff.

**Spoilers for the first four episodes of WandaVision lie within.**

First, let’s talk about Monica Rambeau. We’ve seen her as “Geraldine” since “Don’t Touch That Dial,” and last week on “Now in Color,” we watched her break Wanda’s fourth wall and be thrown from the sitcom world that Wanda Maximoff was creating. This week though, “We Interrupt This Program” showed Monica’s return from the blipped world and what awaited her on the other side.

The first time we met Monica Rambeau was in Captain Marvel, when she was a young girl who looked up to Carol Danvers. Her mother, Maria (played by Lashana Lynch), was a pilot and a beautiful example of bravery and strength. In this episode, we learned that Monica was blipped away right after Maria had surgery, and the former head of S.W.O.R.D. died two years into the Blip from cancer.

Monica, after learning about what happened to her mother (and, by extension, the rest of the universe) goes back to work, meeting the new head of S.W.O.R.D. Tyler Hayward and getting an earthbound assignment. Showing his trust in her, Hayward instantly puts Monica at the forefront of this Westview problem and thrusts her into an assignment instead of letting her fully unpack everything that has happened.

But it does give us a timeline for Wanda’s sitcom adventure. Monica comes back, the director mentions that 3 weeks have passed and she’s the first to return, and Wanda is already well into her sitcom world. So when Monica gets dragged into Westview, we’re already well into the adventure.

And then Darcy comes into the fold. The last we saw of Darcy Lewis, she was working with Jane Foster in Thor: The Dark World and for the last eight years, we haven’t even gotten a mention of her. So to know that she’s working with S.W.O.R.D. and seemingly doing well is great for fans.

But what I loved about Darcy in this episode is that she is the one who figured out what’s going on. Coming in as S.W.O.R.D.’s astrophysicist, she monitors the radiation levels coming off of Westview and realizes that there is radio frequency interlayed with it, showing that Wanda is techincally broadcasting.

Getting a collection of TVs, Darcy begins to invest her time into the show that Wanda is building and slowly starts to realize just how much control Wanda has over what she’s seeing, even if Darcy hasn’t figured out that it’s fully Wanda doing the edits yet.

That leads us to Wanda. At the end of the episode, Wanda Maximoff is talking to Geraldine again, the scene we didn’t see in “Now in Color” playing out before us. The break in her facade turns her from the fun-loving Wanda onscreen to one clearly afraid of losing what she has.

It shows us, though, that Wanda does have the ability to access the real world and her memories from there; she’s just choosing not to. Once Ultron is mentioned, it breaks that wall and accesses her memories, including what Vision looked like after Thanos took the Mind Stone from his head.

What’s fascinating to me about these women (and all those in the town of Westview that we didn’t get to see this week) is that there isn’t really a question of their purpose or their drive. For once, every woman has a clear place in this show, and I appreciate that as a viewer. Marvel has struggled with its “girl power” moments in the past, but WandaVision is giving me strong women who are confident in their work and abilities (with Darcy and Monica) or women thrust into a world they know nothing about and how they’re both breaking and trying to maintain themselves when they’re not in control (like Agnes and even Dottie).

I’m extremely excited to unpack Wanda Maximoff as the series continues on, but I also hope that we get to explore more of what Darcy was doing with S.W.O.R.D. and how Monica Rambeau got her job there.