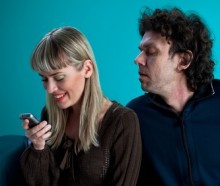 A Toronto woman whose husband left her after discovering that she had been having an affair is putting the blame squarely where it belongs: With her cellphone service provider, Rogers Wireless.

Rogers sent one “global” invoice to the home she shared with her husband, in which he discovered she had been making hours-long calls to one number; from there, he called the number, spoke to the “third party” with whom she had been having the affair, and walked out.

“I lost everything,” she says. “I want others to know what a big corporation has done. I trusted Rogers with my personal information. We had a contract — and agreement that put my life right in their hands.”

How much should the evil corporation, whose fault all of this is, cough up? $600,000, according to the woman behind the suit:

After her husband left her and their two children, ages 6 and 7, she was so distraught her work performance suffered and she lost her job as an apartment rental agent that had paid her almost $100,000 until she was let go in Oct. 10, 2007. “The plaintiff wept uncontrollably at her workplace . . . and became incapable of performing her employment duties,” reads the statement of claim. Nagy says the employer was aware of the situation and that she was receiving medical attention.

In a statement of defence, Rogers denies it terminated the contract and says the company “cannot be held responsible for the condition of the marriage, for the plaintiff’s affair and consequential marriage break-up, nor the effects the break-up has had on her.

“Rogers is not the cause of these. The marriage break-up and its effects happened, or alternatively would in any event have happened, regardless of the form in which the plaintiff and her husband received their invoices for Rogers services in July 2007.”

(Toronto Star via Fark. Title image via Shutterstock. Those stock photo models knew what they were getting themselves into, right?)