Why Was Microsoft So Pushy About Windows 10? | The Mary Sue

Why Did Microsoft Trick So Many Users Into Installing Windows 10? 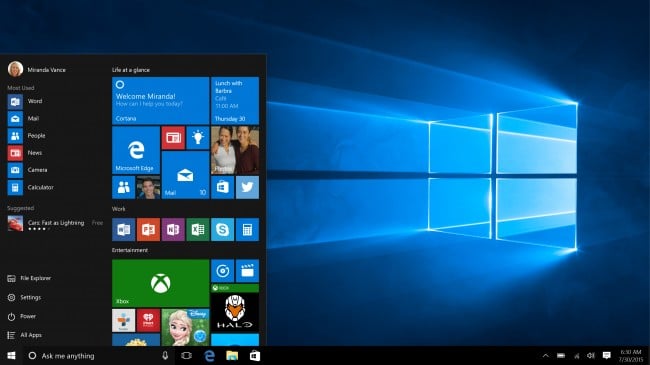 If you’re a Windows user, then it’s unlikely that you missed the deadline for Microsoft’s free upgrade to Windows 10, which passed by over a month ago. You got plenty of reminders. In fact, it’s pretty likely that you upgraded to Windows 10 whether you wanted to or not.

Now that Microsoft’s roll-out of Windows 10 is in the rearview mirror, it’s worth looking back on how weird it actually was–and also, expressing our hope that it doesn’t represent a new precedent for roll-outs in the future. In an editorial at the Electronic Frontier Foundation, Amul Kalia sounds off about the many strange decisions that Microsoft made during their push to get as many users as possible to install the new operating system.

Microsoft pulled a lot of sneaky moves to get users to upgrade, sometimes without users fully realizing that they were consenting to the update at all. Some might even call that outright trickery rather than just sneaky. One of the most worrying examples in Kalia’s piece describes the members of a wildlife conservation group based in “the central African bush,” one of whom wrote a viral Reddit post about their concern over accidentally initiating the update. The group’s computers are used to “track & coordinate anti-poaching rangers in the field … Aside from the fact that we pay per MB, and already share a slow connection, if a forced upgrade happened and crashed our pc’s [sic] while in the middle of coordinating rangers under fire from armed militarized poachers… blood could literally be on MS’s hands.”

This shouldn’t even be a concern, but Microsoft made it far too easy for users to install Windows 10 without realizing it. Many users have Windows’ “recommended updates” turned on automatically, and so when Microsoft decided to make their new operating system into a “recommended update,” they did so with the knowledge that many users would end up downloading it automatically. Windows Update also automatically included Windows 10 on a list of “optional” updates, with the upgrade automatically checked off, meaning that users who didn’t notice it had been checked already might start to install it without realizing.

Users could cancel the Windows 10 update after it began, but only if they noticed it. If you install updates right before going to bed, for example, you might wake up to a rude surprise. Plus, you need only type “Windows 10 breaks computer” into a search engine to find a whole host of examples on how the new operating system ended up making life difficult for users who installed it. It is possible to roll back to a previous operating system even after installing Windows 10–unless Windows 10 broke your computer, in which case you might suddenly have to deal with some irritating phone calls to Microsoft for help. If you didn’t even intend to install Windows 10, those phone calls would feel all the more annoying–and that’s not even factoring in complications like the ones held by the wildlife group in the African bush, who need their computers to help them survive, and don’t really have time to wait in a Microsoft phone tree.

Unfortunately, Microsoft’s pushiness about Windows 10 doesn’t end with the way they structured their updates. They’ve also been quite pushy about sending users’ personal data back to their servers. Slate has an extensive guide on how to turn off those settings, by the way. One of the most important tips? Turn off Cortana. She may seem friendly, but she might be a little too friendly, since she holds onto a ton of personal data, like speech recognition, browser history, location data, calendar and contacts, not to mention your email history.

Microsoft hasn’t yet explained what they’re going to do with all of that personal data, other than use it make Windows 10 better. They do specify that they don’t give this data to advertisers, but Cortana does use it to “personalize” your search results, which is interesting, because Google is already trying to personalize those results as it is. Sounds like Microsoft and Google will be battling over your heart (and your wallet)! Even if Microsoft isn’t giving your data to advertisers directly, the personalization of search results will end in you seeing certain sites and not others–the sites that can afford to be prioritized, that is. That’s not a great way for the internet to be run, in my opinion.

Of course, there are always other operating systems out there (*cough* Linux), but if you play any PC games at all, you’re stuck with having at least one installation of Windows floating around in your life. Since Windows 7 will not be supported for very much longer, I know that eventually I’m going to have to bite the bullet and install Windows 10 (I did accept my free upgrade before the deadline passed, I just never finished installing it, so it’s been in pending for a while now). When that time comes, I’ll be turning Cortana off … which is too bad, because I love having robot friends. I’m just not so sure that Cortana is a friend I can trust.

(via eff.org, image via Windows)