Kylo Ren: A Perfect Villain for the Age of the Alt-Right | The Mary Sue 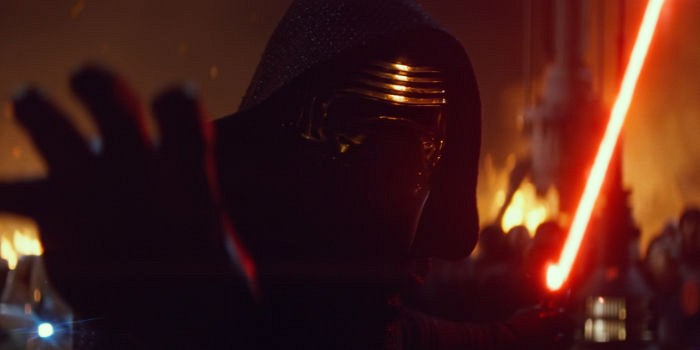 Fan reactions to Star Wars: The Last Jedi are … shall we say, divided, but most viewers seem to agree that Kylo Ren makes for an excellent, easy-to-hate villain. Adam Driver’s performance as the “new Vader” of the trilogy is remarkably compelling, and the screenwriters also give him all the most devastating and callous kills in the new trilogy. He’s a well-written, well-performed villain. But I think there’s another reason the character is resonating: Kylo Ren, in his petty and dangerous fascist rage, is a villain that we can all recognize in 2017.

Dominated by his own fear and childish needs, without any coherent ideology except for his own hate and lust for power, Kylo is as petty and immature as he is dangerous. And no matter how badly the people in his life want to save him, his only way out is to grow the hell up. And that’s something no one else can do for him.

Kylo is incredibly powerful, but he is also incredibly childish. When the Rebels escape him in The Force Awakens, he throws a ludicrous temper tantrum with his lightsaber. In The Last Jedi, Luke goads him by appearing via projection, and the Resistance goads him with the Millennium Falcon, because they all know his personal, childish desire to destroy those things will distract him from the First Order’s strategic goals. Even Snoke calls him “a child in a mask,” mocking the pretensions of his pseudo-Vader mask and voice modulator. He is a boy’s unintentional parody of the imaginary, long-lost manhood he wants to emulate. Like the “alpha males” of the MRA movement, he makes himself ridiculous by emulating something that never existed as he imagines it did.

However, the new trilogy never pretends that this childishness makes his rage any less dangerous, or any more forgivable. His furies are petty, but they kill people. Like the alt-righters who marched in Charlottesville wearing those ugly white polos, Kylo is ridiculous – but he is also monstrous. In having him kill Han Solo and out-Snoke Snoke, both The Force Awakens and The Last Jedi present Kylo as someone who isn’t seduced by the Dark Side, but actively courting it.

Of course, when we say Kylo is childish, we don’t just mean the pettiness and immaturity, the lashing out and the silly costume. We also mean that he is scared and desperate. He has been genuinely failed by the men in power, and so he has no real role models. His mentor, Luke, failed him and tried to murder him. His father, Han Solo, we don’t know much about. But seriously, do we imagine that the smuggler was a great, stable dad? Doubtful. The men Kylo thought he was supposed to emulate turn out to be nothing special, fallible and frail like the rest of us.

And so Kylo turns to the First Order, an ideology that tells him his rage and pain are the valid and just reactions to a sick world that needs to be burned clean.

He has allied himself to an old and established evil, but he thinks he’s invented something new and powerful. His first line in the new trilogy, “Look how old you’ve become,” demonstrates his contempt for the old world order that he believes he is above. And yet he has tied himself tightly to that order, enforcing the old-school fascism of the Empire while convincing himself that, even though the First Order employs the same hierarchy, methods, and goals, it’s a totally new and different version of that thing. Just like the alt-right tries to repackage fascism and white supremacy with a new label, Kylo believes that he is creating a newer, superior vision of empire.

But perhaps the most damning and crucial part of Kylo’s characterization is that the good guys really, really want to believe in Kylo, even though they shouldn’t. Just as we see scores and score of sympathetic portraits of Trump voters, and unconscionably gentle write-ups of alt-right bigots from outlets like Mother Jones and The New York Times, we also see Rey desperately trying to believe that if she just reaches out, if she can just understand the pain and anger that motivate Kylo, then she can convince him to make the right decision.

But the angry, proto-fascist man-boys won’t change. They will repeatedly make the worst and cruellest decisions – not because they have to, but because they want to. Kylo doesn’t have to kill his father; he wants to. When Rey reaches out, we know it’s futile, even if she doesn’t.

What the First Order gives Kylo is a promise that he is “something truly special,” that because of his bloodline he is destined for greatness, if only he can get the clunky, stupid world out of his way. As Laurie Penny wrote, the wounded man-children of the new far-right are “hurting other people deliberately, in order to up-cycle their uncomfortable emotions, reselling the pain they can’t bear to look at as a noble political crusade.” The fact that their emotions drive them to fascism makes them more dangerous, not less.

After all, you can argue with fascist ideology. But you can’t argue away fascist feelings. You can only fight them.