Where DC's Heroes in Crisis Went Wrong | The Mary Sue 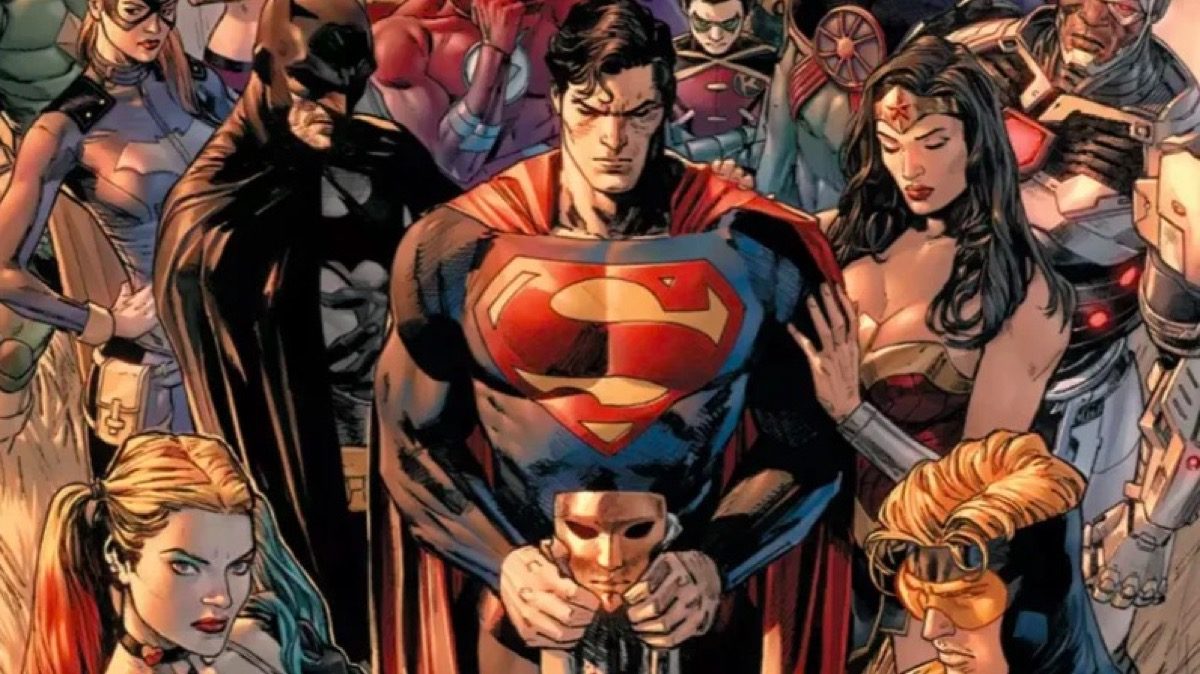 In June 2018, DC Comics announced Heroes in Crisis with the promise that it would be an exploration of the toll that the lives superheroes lead takes on their mental health. This event was supposed to be different from the type of high-profile superhero story that came before it—a way to move away from the grand battles and focus on the personal conflicts faced by DC’s characters. Unfortunately, Heroes in Crisis was afflicted by the same problems which had affected even comics before it.

What was promised to be different turned out to be more of the same.

Heroes in Crisis starts in the wake of a mass murder in Sanctuary, a location devised by Batman, Superman, and Wonder Woman for the purpose of providing superheroes with therapy. The victims of the murder are all characters who were at Sanctuary to heal, and the chief suspects are Booster Gold and Harley Quinn, both of whom claim the other did it. In the end, though, it’s revealed that Wally West was, in fact, responsible for the deaths (having attempted to frame Booster and Harley), and after being confronted, he willingly allows himself to be arrested.

Central to Heroes in Crisis is its mystery. The heroes spend seven issues trying to figure out who killed the characters seeking the help that the Sanctuary promised, and two dealing with the fallout of who the culprit turns out to be. This mystery as is the heart of Heroes in Crisis’ failings as a story about mental health.

Firstly, let’s talk about the man responsible for the deaths: Wally West. His confession of guilt comes at the start of #8. In it, he talks about how he came to believe that he was all alone in the sanctuary, and that he lost control of his powers, resulting in the deaths discovered at the beginning of the series. There are hints and clues that lead to the revelation, but it comes late, and when it does happen, certain elements of how he wound up accidentally killing those around him come out of the blue.

Chief among these surprise elements is his sudden loss of control over his powers (and the cause of the deaths). Throughout the moments the reader is shown of Wally’s time at the Sanctuary, Wally talks about how much he misses the family he lost when he was torn from history. He doesn’t mention that he might lose control of his powers, and he never indicates that he feels that the Sanctuary is all a trick just for him, the feeling which triggers the chain of events leading to his breakdown.

This is a problem because it means that most of the issues are spent trying to catch a character out, rather than spend any real time understanding the issues affecting him. Some of Wally’s chief issues are shared, but never enough to develop a full picture. This is a particularly notable failing in the case of Heroes in Crisis, because a book that promises to focus on mental health should be about understanding the characters involved, not keeping secrets from the readers in order to maintain suspense or make the writing seem smart. 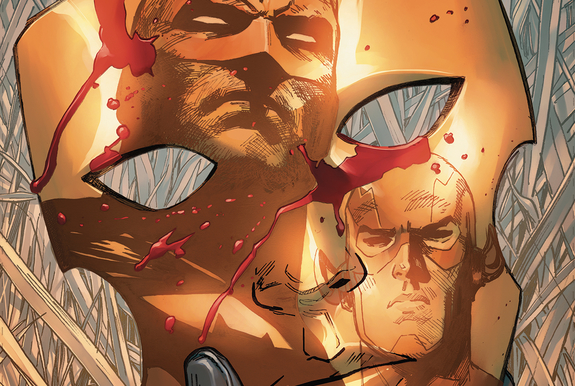 The Sanctuary itself is also guilty of this. The reader learns four main things about the Sanctuary: It’s a complete secret (and when that secret breaks, it’s something of a scandal), anonymity is so important that the people who seek help there are encouraged (but not made) to wear robes and a mask, there is a robot with whom they have therapy sessions, and there are holographic rooms designed to help explore trauma by reliving the events that caused it.

The robes and the holographic rooms are important to explaining the mystery. The robes and secrecy are why Wally feels so isolated, and he uses the holographic rooms in his efforts to convince Booster Gold that Harley Quinn murdered Sanctuary’s other inhabitants, and vice versa. Essentially, they function as motive (of sorts) and means. This is great for the murder mystery, but it’s terrible for a story that aims to explore how a set of characters deal with their mental health problems.

As Wally goes on to prove, having the characters walk around in robes only serves to fuel feelings of isolation. Getting them to relive their trauma in a holographic room doesn’t help them move past it; it’s just expensive PTSD. Sanctuary is never allowed to be shown as a place of positive mental health growth because it’s too restrained by what it needs to take for the sake of the central murder mystery, which dominates the story.

This is true of when the existence of Sanctuary goes public, as well. Superman even goes as far as to confide in Lois that he fears the leak of Sanctuary’s existence has permanently turned the people against their costumed protectors. The fear and mistrust shown by the public in reaction to learning that superheroes need help managing their mental health is more appropriate for a thriller than what Heroes in Crisis set out to be. How are readers with mental health issues supposed to feel when they see a story in which seeking appropriate help for what ails you mentally results in such a response?

Finally, let’s talk about the deaths that set the events of Heroes in Crisis in motion. They happen because Wally West has a breakdown, loses control of his powers, and speed force energy shoots out of his body, killing everyone around him.

While it’s a relief that he didn’t “snap” and start killing everyone intentionally in typical comic book fashion, this scenario isn’t much better. Wally’s breakdown results in people’s deaths. This perpetuates a very damaging lie surrounding mental health—that people experiencing a mental breakdown pose the greatest risk to others. The opposite is true; they are, in fact, most likely to harm themselves. Feeding into harmful stereotypes surrounding mental health is not how you tell a positive story about mental health.

After nine issues, what readers are left with is a story in which the help provided to heroes who need it is woefully inadequate, the heroes are judged for seeking that help by the general public, and revelations made at the end rely on damaging misconceptions. 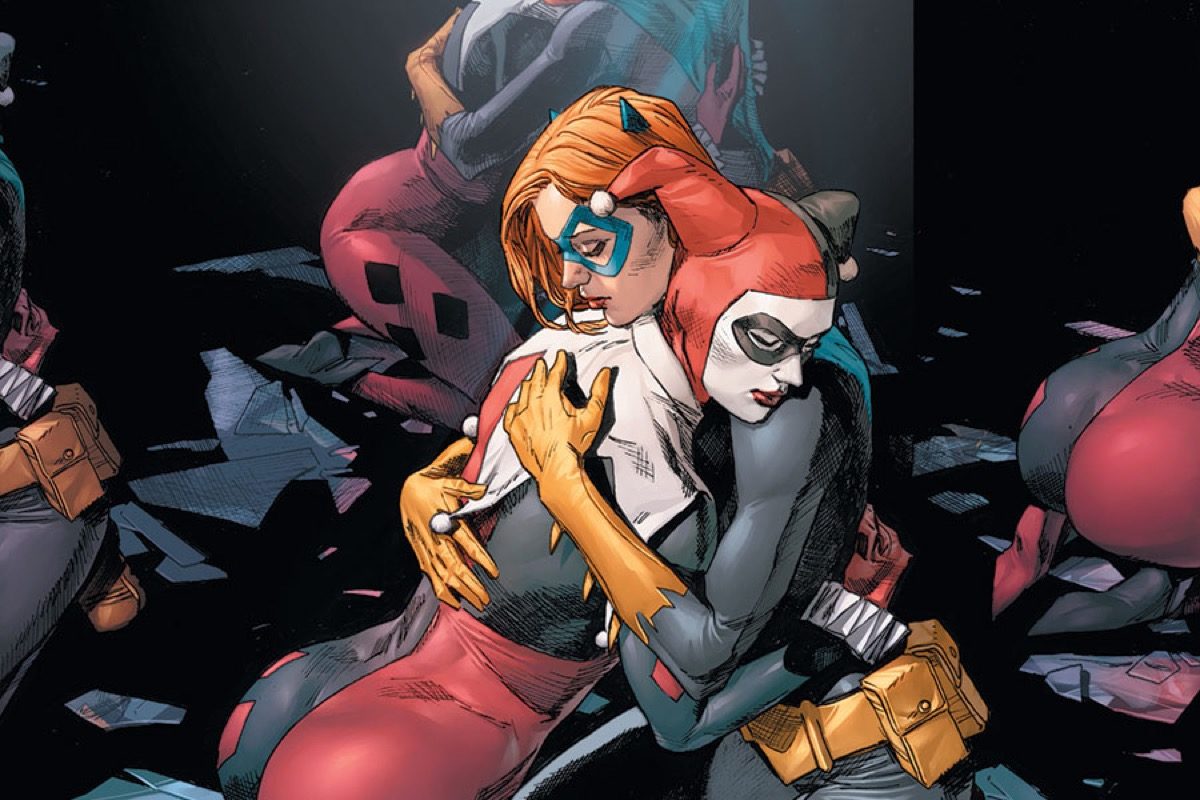 There are times when Heroes in Crisis manages to rise above this. In issue #4, Batgirl and Harley’s first scene together ends with the two hugging, and the former asking the latter how she’s doing. It’s a tender moment of one friend offering much-needed emotional support to another.

Similarly, the conflict in issue #9 is resolved because Wally’s friends manage to get through to him, and he realises that he is not alone. It doesn’t solve all of his problems, but he is able to truly open up for the first time and avert his own death, a death that seemed inevitable eight issues earlier.

These moments are good because they’re about healing. The problem is that Heroes in Crisis spends most of its time ignoring healing in favor of trauma. Healing is, instead, relegated to the end of the series. This would have been appropriate for any other type of comic book event, but it’s exactly the wrong approach for this one. It leaves the discussion of mental health feeling both incomplete and exploitative, rather than understanding.

Before Heroes in Crisis came out, it was promised that it would be different from the usual event book. It wasn’t. Its failure to live up to that promise is what brings this book down. What was needed here was a story that truly broke the mold of the usual superhero fare, not more of the same.