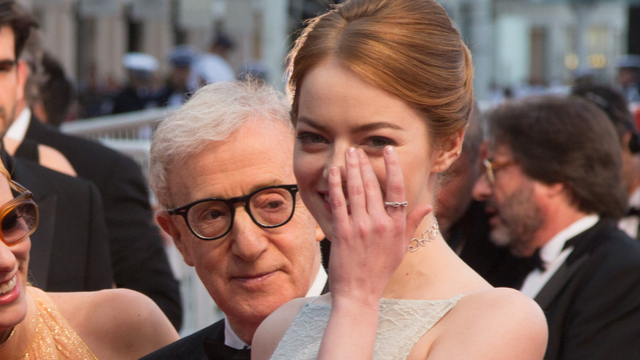 At this Sunday’s Golden Globes, the subject of sexual harassment and assault was front and center. From women’s black gowns to the statistics and talking points they came armed with for interviews, the solidarity and determination on display at this arguably frivolous event was powerful. But as I wrote about during the show, that only made the night’s outliers stand out even more. There were the interviewers who were wholly unprepared to be talking about these issues. There were the men who weren’t even asked to speak about them. And there were the stars whose continued work alongside alleged abusers made their black outfits or their Time’s Up pins laughably hypocritical.

Among all the sexual predators being outed in Hollywood, one man who continues to remain relatively unaffected is Woody Allen. Despite the repeated accusations of sexual assault and child molestation from his daughter, Dylan Farrow, Allen continues to work, and continues to be celebrated by many of his peers. When asked in interviews how the stars of his movies can justify their decision to work with him, those stars are consistently, perplexingly let off the hook when they inevitably skirt the issue.

Last week, Farrow called out Blake Lively for tweeting about Time’s Up, which stands in contrast to her continued silence regarding her work with Allen. 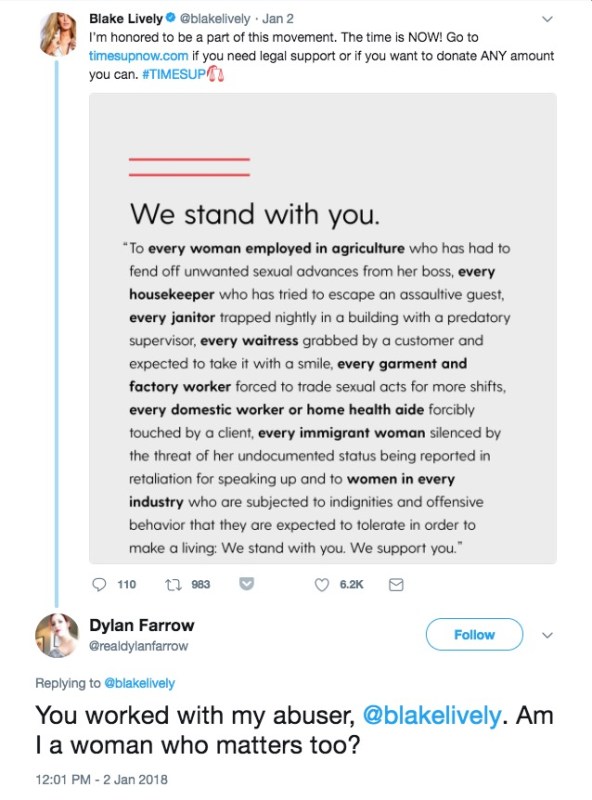 Unfortunately, Lively is part of a large club here–one that was in full display at the Golden Globes. Emma Stone hasn’t spoken about her work with Allen, but declares “time’s up” for, I suppose, other men.

Emma Stone, wearing black, speaking up for #TimesUp and brought an activist to the #GoldenGlobes

Emma Stone also worked with Woody Allen twice, has yet to support Dylan Farrow or donate her earnings from working with him to RAINN.

Justin Timberlake is fresh off Wonder Wheel, which he called “a dream come true,” making his pin nothing more than a hollow, trendy symbol.

Greta Gerwig worked with Woody Allen in 2012, but even she, our current indie feminist darling, went the route of saying as little as possible when asked directly about that decision on Sunday.

I asked Greta Gerwig how she feels about her decision to work with Woody Allen. She said this: pic.twitter.com/W9bngQqY5V

Really? In six years you “haven’t had an opportunity” to think about this?

Dylan Farrow was already completely over all this guarded posturing. It’s been four years since she wrote her open letter detailing the abuse she says she suffered at the hands of Allen.

I thought it would make a difference. I thought things would change. I learned quickly (and painfully) that my optimism was misplaced. His time wasn’t up. /2

And yet Woody Allen remains unscathed.

But I have to wonder – is time really up now? Is this really the turning point? I have no doubt it can be. I have no doubt the time is right. But in order for things to meaningfully change, they need to change unequivocally. /4

It was clear that on Sunday, when the men and women of Hollywood gathered together to say “time’s up” on sexual abuse and abuse of power, that statement came with some disclaimers.

"Wearing black means nothing if you’re not willing to denounce those in power—no matter how much they might mean to you." https://t.co/MLl4QZL6SJ

Farrow has released a powerful statement to BuzzFeed, reiterating the fact that she supports this movement, but that real change is not as easy as wearing a pin or a certain color, or focusing on a handful of villains while ignoring others. She writes,

I fully support women taking a stand, linking arms with other women (and men), advocating on behalf of one another to effect change not only in the entertainment industry but in the world at large. That is an admirable and worthwhile objective, I hope these women change the world. That said, the people who join this movement without taking any kind of personal accountability for the ways in which their own words and decisions have helped to perpetuate the culture they are fighting against, that’s hard for me to reconcile.

She also specifically called out some of those actors who don’t just refuse to denounce Allen, but continue to actively praise him.

I struggle to understand how a woman who believes Woody Allen is ’empowering to women’ can claim the role as an advocate for women suffering from sexual harassment. I struggle with how a powerful force like Justin Timberlake can claim to be in awe of the strength of women and stand with them at this #MeToo moment and then in the next breath say that working with Woody Allen is a “dream come true.”

I know that many of us watching this from the outside are infuriated by this hypocrisy. But for Farrow, this must feel intimately personal.

It’s of course particularly hard for me as a survivor of sexual abuse to know that for these particular individuals I am not part of the ‘every woman’ they stand for. I seem to remain secondary to their ambition, which undermines the powerful and embracing message they are trying to send.

Farrow’s continued drive, and her refusal to be silenced by others’ insulting enthusiasm over her alleged abuser, is inspiring and wholly impressive. No number of moving speeches or cool pins will make any lasting difference at all if we continue to pick and choose the women we’re willing to listen to and ignore the rest out a lack of convenience or a love of prestige.